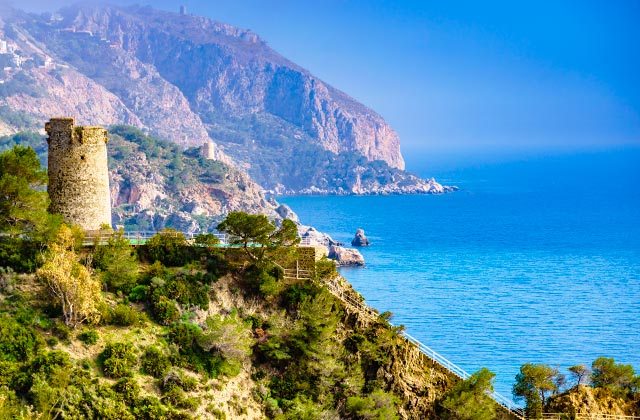 Posted by Fuerte Hoteles on Tuesday, February 15, 2022 · Leave a Comment

Costa del Sol (East) is internationally known for its good weather, its beaches, its bars and the lively nightlife in villages that have been transformed into cities such as Marbella, Estepona or Benalmádena. But Malaga has a well kept secret, Costa del Sol East, on the other side of the province with its epicenter in Nerja. There, the Maro Natural Park – Cerro Gordo stands as an explosion of nature, of wild beaches where lovers of peace and the sea find crystal clear waters, virgin coves and an ideal enclave to disconnect from the urban bustle.

This coastal landscape runs mostly along the Maro district, a small village of white houses, where you can breathe in all the flavor of the Andalucian towns, with its 300 days of sunshine a year and its 18ºC annual average temperature. The Maro coves meander a distance of 12 kilometers of a wonderful contrast between land and sea, of green and blue, a landscape dotted with pine trees, where towering cliffs that hide small coves for nudists and heavenly atmosphere rise.

In short, Maro beaches are a stretch of great ecological value that, due to the rugged terrain, has become a haven for lovers of nature in its pure state. From the Ravine Cove of Maro, passing through Molino de Papel, El Cañuelo, up to Cantarrijan Beach (now in the town of Almuñecar, on Granada’s subtropical coast), there are 9 different coves, for every taste, some difficult to access, but that are well worth a visit. We invite you to roam around – in geographical order – from Maro to Almuñecar: 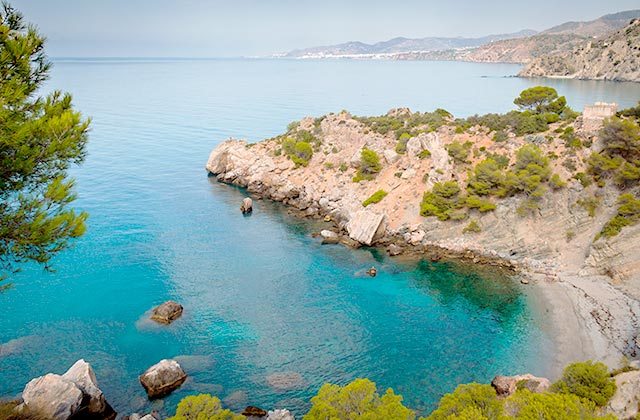 This tiny cove, just 20 meters long, is a real hideaway for those seeking complete privacy. The important thing here is to get there first and ‘occupy’ the place, although the secrecy of its location and its difficult access will not find a lot of competition. This peace oasis is located at the mouth of the Maro Ravine, protected by a thick cane field and bathed by crystal clear waters that shape the boulders of its sand.

You can access this little cove passing kilometer 294 of the N-340 towards Nerja Almeria, some 300 meters right before a curve where you have to deviate to the left before crossing the bridge and going down a lane that is in very bad conditions (only accessible by 4×4 vehicles) that comes down the Maro Ravine. Upon reaching a small hut, the road becomes a path on which we will arrive to this little piece of beach, on foot after about a kilometer. 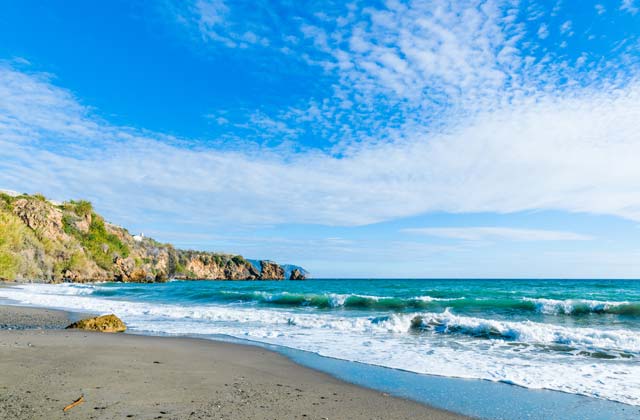 The Maro Cove is known by many as ‘Cala Chica’ (Small Cove), invented name that the screenwriters of the legendary Spanish series ‘Verano Azul’ gave it, since here, many of the episodes of the ‘Chanquete’ gang were filmed. This beach is next to the Ravine Cove of Maro, and just like this, it is also difficult to access which makes it have a low occupancy. It is sandier than the previous and has a length of 400 meters, sheltered by the cane fields that run through it, giving it a real wild charm, a place where nudists and textiles live together. It is accessed entering through the Nerja Cave crossing to Maro, running through it and going down a road that runs between crops and greenhouses, according to the indications given by the Tourism Office of Nerja. 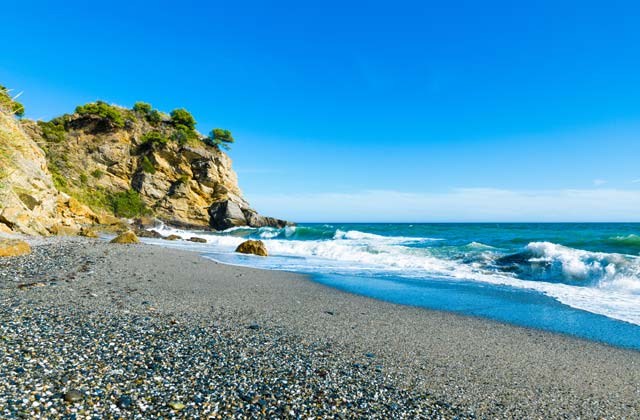 This beach is much more crowded than the others because of its easy access by car, which does not take away any charm. In this case it is a stretch of sand, 500 meters long that rises between crops, cane fields, cliffs and its characteristic crystal clear water. Unlike the previous, the Maro Cove has a restaurant, a sun lounger kiosk and parking. To get there, take the N-340 and choose the exit at Maro, go through the village and when you reach the first roundabout take the first exit on the right. 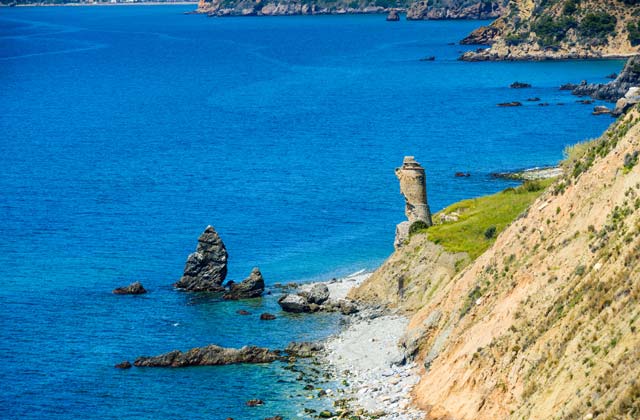 Before continuing our route towards Granada direction through the beaches of Nerja, we can make a stop to observe the magnificent views the Tower of Maro offers, a watchtower built in the XVIth Century, used to spot the enemy and protect the territory from pirates. The access is signposted at kilometer 297 of N-340, and then after about 300 meters at km 298 on the right, we find the next cove, Molino de Papel.

This beach has a special history, in its day it housed a paper mill, the ruins of which are still preserved today, and which give the environment a certain mystical air. It can be accessed by car, although it is advisable to walk down when the asphalt ends. This cove is about 400 meters long and is divided in two by the Colmenarejos Stream that creates a small pool of fresh water just before reaching the sea, ideal to strip away the salt after bathing. The force of the sea and the tides have caused this beach to become very rocky in some seasons, so it is advisable to use water shoes to enter the sea in complete safety. 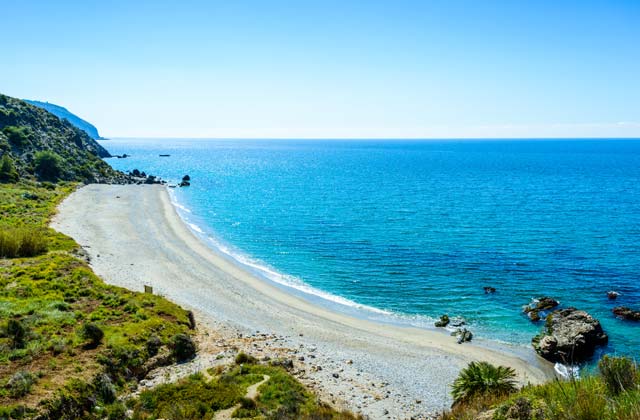 It is connected to the Molino de Papel Beach through what remains of the watchtower of Rio de la Miel. This is a far wider cove, with more sand and 400 meters long. Like the rest of the coves in the area, it is surrounded by a natural environment that gives it a stunning beauty, and that makes this area not only enjoyable in summer, but there are multiple hiking trails to go on during the winter season. The Maro Cove – Cerro Gordo – borders the Sierras de Almijara Natural Park, Tejeda and Alhama, and it is customary, though not surprising to swimmers, see mountain goats roam the walls of the cliffs by the sea. To access it, you must pass km 299, and after about 200 meters turn right where a lane leading down to the beach itself is open. 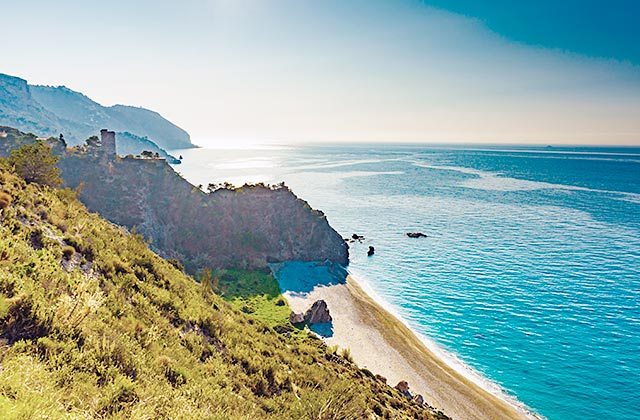 These two are rather sandy coves and although they are separated by rocks you can go walking from one to another. They are 350 meters long and 10 meters wide. They are two sandy coves of medium proportions located between Alberquillas Beach and del Pino Tower. Although they are separated by fallen rocks, you can easily go from one to another on foot. To access you can leave the car in one of the curves of the old national road 340, which is accessed past kilometer 299. From there a steep path goes down to the beach. 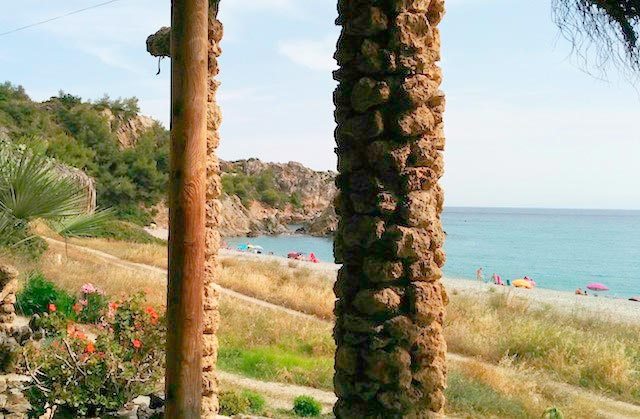 El Cañuelo is one of the most beloved beaches by the locals; you could say it is the jewel in the crown of Maro and the last of Malaga. This is a fairly large cove, where the rocks have formed a unique spellbinding landscape. But not only what is seen with the naked eye surprises the bathers, a seabed inhabited by a multitude of fish, with Posidonia meadows, corals and sponges awaits under the sea, ideal for snorkelers (an under the sea paradise it shares with all this maritime area).

To access, we must continue on Highway 340, after El Pino Coves we will see clear signs towards El Cañuelo, where there is a parking area. There we will leave the car to go down to the beach on a minibus that runs from June to September. There are two picnic areas well integrated with the surroundings, the beach bar ‘Las Piedras’ and ‘La Inopia’, where you can enjoy spectacular sunsets towards Nerja.

Now, in the Granada tropical coast, we come across the last beach of the Maro Natural Park – Cerro Gordo, Cantarrijan. Like the previous one, during the high season a minibus is responsible for taking the bathers down to the creek, during the rest of the year it can be accessed by car. Cantarrijan Beach is another of the most popular in this place; it is divided into two, a smaller first cove with two beach bars where you can enjoy spectacular fish and hammock area; and the other wilder and extensive where nudists find one of her favorite enclaves.

As we mentioned, the first of the coves is often frequented by families who find in La Barraca and Bola Marina beach bars to enjoy good fish and the typical Granada tapas accompanied by ice cold beer. Also in this part of the Cantarrijan Beach you can rent kayaks or have a massage, even buy a souvenir at the hippie stalls. On the other side of the rock, turquoise waters, quiet and naturist environment, it is important to note that in most of the Maro coves nudists and textiles live happily together.

The Maro Natural Park – Cerro Gordo is a living space for everyone, where those seeking only to lie in the sun converge with those who want to take a dip and enjoy the delicacies that the beach coolers sometimes hide; such as those who do not stop and prefer to live their beach days through sports and active tourism. To this end one of the most recognized companies in the area Salamandra Multi-adventure, which organizes kayaking tours to areas which are inaccessible on foot, going through caves and grottoes to reach stunning waterfalls of fresh water flowing into the sea.

The best beaches on the Costa del Sol

The Olée Holiday Rentals Apartments are an ideal enclave to enjoy the Maro Natural Park – Cerro Gordo, between Torrox and Nerja, typical Andalucian villages with the best climate in the whole of Europe. It is at 200 meters from the beach and the international airport of Malaga 30 minutes away by car. They have outdoor swimming pools, a solarium, deck chairs and everything you need to discover the hidden beauty of Eastern Costa del Sol in Malaga.