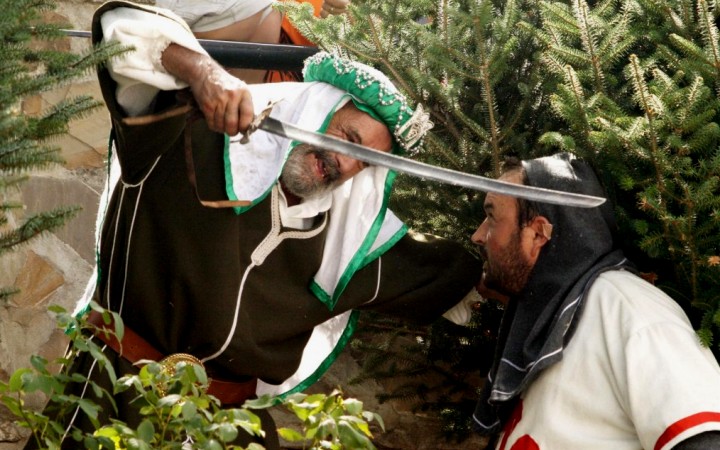 Benamahoma will hold its most popular feast: Moors and Christians

From 3 to 6 August all the village takes part in the reenactment of the fights to get hold of the image of the patron saint Anthony of Padua.

This village of the municipality of Grazalema is one of the 127 villages and towns that celebrate the Christian conquest with the festival of Moors and Christians, the only one celebrated in Western Andalusia, this is why it is visited by so many curious people who are in the area.

Annually, during the first weekend in August Benamahoma, in the Sierra de Grazalema Natural Park, makes a leap in time, and goes back many centuries, at the time when Muslim rule in the Peninsula was on its last legs, and the Christian armies advanced retaking Al-Andalus.

Fuerte Grazalema Hotel, is a perfect place to stay, at the heart of Grazalema, if you want to enjoy this unique festival.

Guarding of the Saint

The village turns into a festival where all the villagers, benamahometans, take part. The main actor of this event is the patron saint Anthony of Padua.

Guarding of the saint is the focus of the festival and the scenario to spend three days full of activities and proposals for all. Benamahoma decks out streets, fills them up with Moor and Christian banners and gets really into its most important feast.

A festival from family tradition

In the traditional battles between Moors and Christians, children battles take place first, continuing with the adults.

The assignment of actors to one or another party in this mock battle between Christians and Muslims is determined by family tradition. Who participates once for one side can never do it for the opposite. Throughout the year children take fencing lessons to know how to use swords.

According to tradition, Moors start with an advantage over Christians. From the day before the feast, Saint Anthony of Padua is in his possession. The image of the saint remains behind the moor ranks, and facing them the Christians advance. At this moment the fighting starts both with trabuco shoots and at close quarters’ fights which almost always ends up tearing the opponent wool clothes.

Fighting goes on along the course of the procession of the patron saint, from the small chapel dedicated to the saint, located at the centre of the village to the source of the river, through calle Real.

The struggle seems matched but final victory is always reserved for Christians. When it is over, the best you can do is to go to the boost where a free delicious food tasting is waiting for all. Also there is the release of heifers on Saturday, Sunday and Monday evenings.

Group of hikers in the heart of the Sierra de Grazalema

It is not known with certainty for how long has been celebrated this festival, although it is supposed to be since early 16th century, as a remembrance of the retaking a century before. In the 16th century the feast became popular and the people were integrated in it, and then became local and patron saint feast for the village.
The legend says that an Arab prince found the village, and he took refuge fleeing the Christians in this sierra, and that he loved it so much for its greenery, orchards and abundance of water, that he gave the name of the prophet Mahomet, ibn-Mahommed in Arabic, (sons of Mahoma).

Benamahometans all out for it

During the four days the celebration last, the village gives all its support to the activities organized, but specially to the related to reenactments battles and processions.
There are also sport competitions, gastronomic festivals and tastings, music gigs, youth festivals, and time sharing among neighbours and relatives, and so on.

Room with view over the Sierra de Grazalema

If you want to follow closely these feasts, 20 minutes by car you find the Fuerte Grazalema Hotel, located in the heart of a fantastic forest of cork oaks in the Sierra de Grazalema (Cádiz). It is a natural heaven to spend these days of celebration where you can switch from the festive charm of the Feast of Moors and Christians to the quietness offered by the hotel. Also it is a few kilometres away from the most charming white villages in Andalusia, sites of great tourist interest.