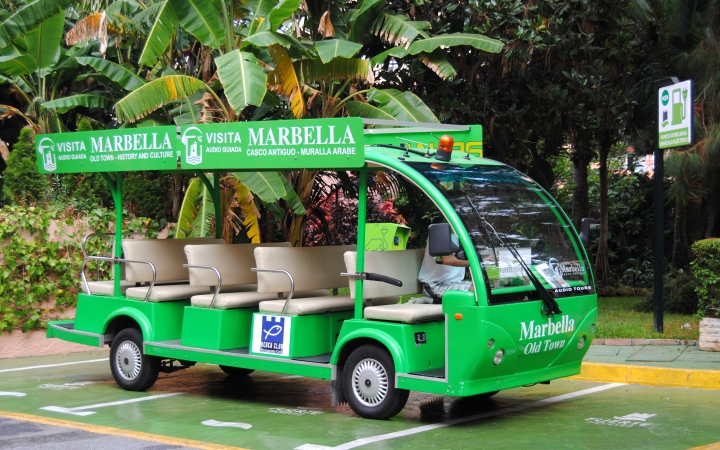 Electric bus at the recharging point

Fuerte Marbella hotel has at its outdoor facilities the only recharging point in town for electric vehicles.

Fuerte Hoteles chain has developed since the opening of its first establishment, Fuerte Marbella Hotel, more than 50 years ago a strong commitment to the natural, cultural, and socioeconomic environment where they are located. The development of this responsible tourism allows in this way to live together in harmony with both local community and natural environment.

This commitment includes the agreement made by Fuerte Miramar and Fuerte Marbella hotels with the electric minibus running through the town.

It is a bus with fifteen seats (driver’s included) available to the hotel customers, which takes them to some of the most emblematic places of the old town with no use of petrol, diesel or other fossil fuels.

Fuerte Marbella hotel also has at its outdoor facilities a battery recharging station for the new electric vehicles running through town.

So, tourists arriving at our Marbella hotels have available a free visit that includes among the places of the tour the remains of the Arab Castle and some of the most emblematic streets of Marbella. This service is free for clients of both hotels on Tuesday and departure time is at 10:30 (Fuerte Marbella) and 11:30 (Fuerte Miramar), leaving from the hotel parking lot.

Tour through an unknown Marbella

This electric bus service is also available independently any other day of the week, leaving from Marbella Marina. The tour is about 45 minutes long.

The visit includes an audio- guide system in Spanish and English describing the tour sites. They include: the remains of the Arab Castle, Ntra. Sra. de la Encarnacion Church, Plaza de los Naranjos, Town Hall, Paseo La Alameda, Parque de la Constitucion, and some of the most typical streets. Definitely, it is a complete tour through Marbella monumental, historical and commercial areas. 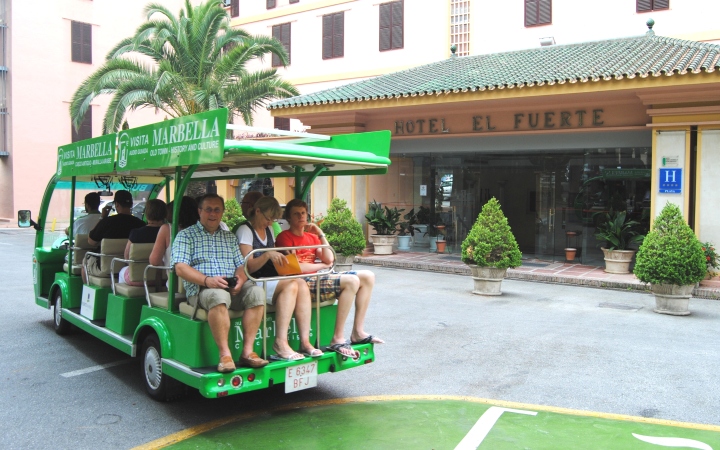 Some of the advantages of this kind of buses are: increased efficiency of fuel consumption (it is electric energy accumulated on the vehicle batteries), reduction of polluting emissions, lower engine noise, or reduced costs, among many others making this vehicle an ally for the environment.

According to a report made by the Instituto para la Diversificación y Ahorro de la Energía (Energy Saving and Diversification Institute), conventional vehicles have an average emission of carbon dioxide (CO2) of 89.52 g/km, while an electric car generates much less, around 29.19 g/km.

Fuerte Hoteles makes a bid for carrying out its activities in a friendly way with the natural environment where its hotels are located and its business are conducted. Through its environment management integrated to all levels, it transfers and give a response to its own and today’s society concern about maintaining and improving natural resources for the use and benefit of future generations.

Do you join the sustainable tour??