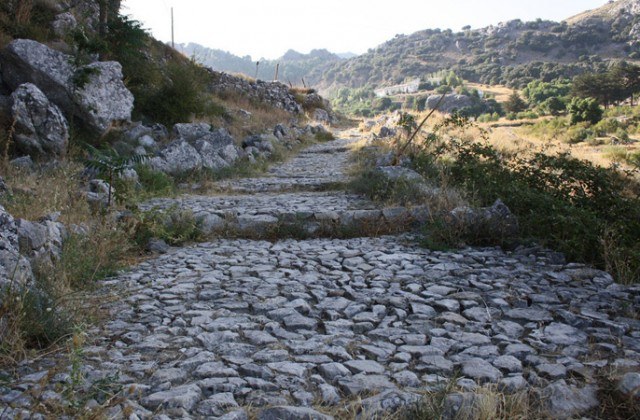 For another week we are lending space on our blog to Petra and her travel journal which, we regret to announce, will be her last post, describing the fifth day of her stay at the Fuerte Grazalema Hotel. This German girl wanted to share her experiences of sport, trekking and nature on the Llanos del Endrina (Endrina Plains) Route, the Salto del Cabrero walk, the River Campobuche Lagoon and on the Pinsapar Route. Today she takes her leave by telling us about the Roman Road. Over to you Petra:

Today we went to Benaocaz, where we met Christo and were later joined by Rosa.

Christo showed us some remains of buildings and old roadways in his native village, which are now partially covered by vegetation. He showed us the Tejar fountain, whose water tastes particularly good. The road continued a little way uphill and took us to a small chapel. The chapel houses a shepherd’s stone cross. We continued a little further along the road and reached the Roman Road path.

After crossing a meadow full of flowers and cacti, we reached the old Roman road and read an information board about what life used to be like. The route continued uphill along an avenue of carob trees, whose beans are used as feed for cattle and we reached the boundary between Benaocaz and Ubrique. There is a bull’s head painted on a wall of rock. There is a local tradition that if you are lucky enough to hit the bull’s head with a stone, you will be very wealthy. This very pleasant route finishes in Ubrique, at the Fountain of 10 pipes.

Christo’s husband picked us up in the car and took us to a very nice tourist attraction, where some archaeological excavations can be visited (they were closed when we were there).

During a short break, we ate a traditional Andalusian salad based on tomato and tuna, accompanied with home made bread baked in a stone oven. With her individual expressions, Christo told us a nice story about spirits and why love is blind. Gloria translated everything for me and we had a lot of fun.

A great end to my week of trekking at the Fuerte Grazalema hotel.

Map of the route with Wikiloc

It has so far been a real pleasure for Fuerte Hoteles to share the interesting and instructive posts by our guest Petra in her travel journal. We would like to take advantage of the opportunity to invite all of our guests to send us their experiences, which we will post on our blog. It will be our pleasure, so give it a go!