The roar of the bikes is back in Jerez another year. Are you going to miss it? 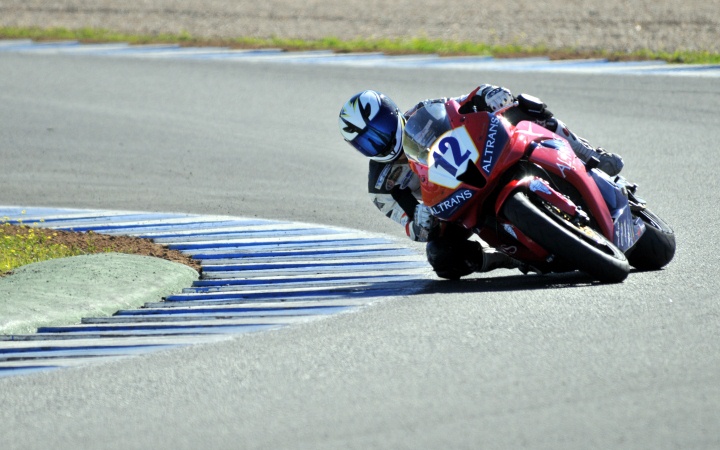 The best plans for the weekend of the 27th to the 29th April are sport, sun and sand.


If you love bikes you can’t miss the Jerez Bike Grand Prix and as you can enjoy this event you can also treat yourself. The Costa de la Luz is the best place to relax in an exotic beach environment; and we at Hotel Fuerte Conil- Costa Luz can make it happen for you. Make a note of the following suggestions to make this April weekend one of the best this year.

The results obtained by Spanish riders in Qatar have upped the interest in the Spanish Grand Prix in the Jerez Circuit which once again this year marks the beginning of the European bike Grand Prixs.  The unique Jerez circuit, devoid of long stretches, discourages riders from breaking away so we can expect greater competition in Jerez with more riders involved in groups tan at the first race of the season. The Grand Prix circus is on the move and the next stop is Jerez.

Bikers from all over the world

Bikers arriving from all over Spain and the rest of the world meet up in the province of Cadiz each year to enjoy this event. It’s very easy whether you come on your Chopper, Custom, Trail or any other type of bike.  Jerez is only 60 km from Conil. Will Lorenzo and Pedrosa win again? Will the Spaniards be on the podium as in Qatar? The emotions that this race elicits year after year are unique. After watching our champions excel, what better than to go down to the Costa de la Luz.

Conil is situated in a location rich in culture and nature. It is a small fishing village which hasn’t lost the charm of Andalucía thanks to its white houses decorated with flowers on their balconies. Although most tourists head for the coast, there are other interesting things to do such as walking along its narrow streets, streets steeped in Spanish history. The Watchtowers are a must, given their important role during the Spanish Reconquista.

Local specialities are another of the attractions of this corner of the Cadiz province. Despite its international flavour, given the mix of tourists that visit every year, Conil is still very traditional when it comes to preparing a good dish. Its seaside promenade is dotted with many different places to eat in and try local delicacies. Don’t leave without trying one of the star dishes, such as tuna, which the restaurant at Hotel Fuerte Conil- Costa Luz has on the menu. You also have to try the shellfish along with traditional green salads and the wide selection of tapas.

Some of the unique villages of Andalucía’s coastline and mountains are just minutes away. Barbate, Los Caños de Meca, and Zahara de los Atunes are just some of the very typical places in this unique region. It is a blend of white villages, beautiful sandy beaches and Andalusian character.

At the end of the day Hotel Fuerte Conil- Costa Luz offers the best views of the sunset next to the sea. You will enjoy the wealth of colour and the smell of the sea as you sip exclusive cocktails and learn to make them as you relax in the idyllic ambience of our cocktail-making workshop in the Fuerte experiencias which the hotel has at your disposal. Our clients can also taste local wines such as Manzanilla and Fino and learn to pour them using the typical “venencia”.

Don’t think twice about it. Enjoy an unforgettable experience and watch Spanish riders live at this Grand Prix. Don’t hear about it second-hand. Apart from being one of the most important circuits in the world, the Jerez Circuit is also one of the most unique thanks to the atmosphere it generates making it a must for all lovers of motor sports.