The Sierra de Grazalema Natural Park is a perfect location for enjoying all levels of trekking routes, for all ages. The wealth of its landscape, as well as the diversity of the animal and plant species that can be found here, make this area of the South of Spain the perfect place to enjoy sport and close encounters with nature. Now we would like to share with you a step-by-step account of the fantastic route between the Fuerte Grazalema and Pantanillo de Gaduares:

Leaving the Hotel Fuerte Grazalema, we crossed the street and headed in the direction of the Alamillos Inn. We took the lane to our left, which then forked, and followed the right one you finally find ourselves walking along the Terrajos Creek, near the frog marsh. We took the trail on the left and headed past the “Alcornoque de las Ánimas” cork tree, which is located in a valley where the wild peruétanos or pears showcase the region’s deep history of farming.

Continuing on to the right, or south main trail, surrounded by a dense collection of cork trees, to a small cove where you’ll find a valley that welcomes the Campobuche River or offers a glimpse up the mountain to see the first view of the Patagalana Dolmen. We turned left to begin ascending parallel to the stream and on the right found the gate that led us to the Hoyo de la Matanza, Zurraque, and Gall de Zurraque. Heading up the trail, we passed a chain – then turned left to go down a path that lead to the Llano de Culantro where we found the Pozo de Culantro, or well, on the left. 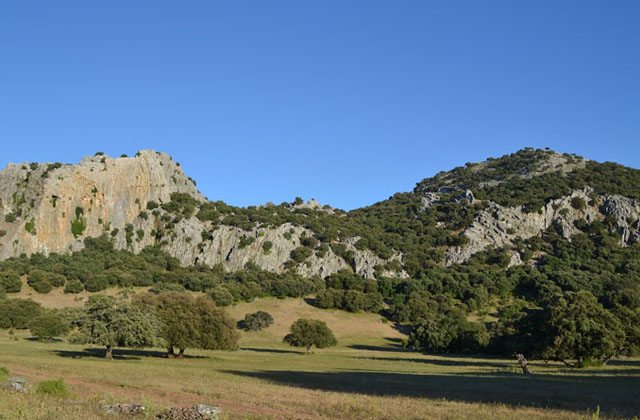 Halfway up the entry to the Foreila, we encountered the “Cruz del Solano”, after which we continued on until reaching a point where spectacular views opened in front of us, allowing us to appreciate sights of what must have been the Montejaque reservoir, the Sierra de las Nieves, Arriate and a part of Ronda.

Starting our decent, we observed the agricultural craft of the olive groves below and the Cerro de Tavizna, which sits on the Montejaque reservoir and Hundidero cave. Leaving the main trail behind, we turned left (in the opposite direction and only 2.5 km would Montejaque population) we headed to the Cortijo de los Calabazales (or Aguilares, as it is also known) through the Birthplace of Huerta de la Gorda.

Continuing on up the trail, we found “The Bridge”, then turned to the right and continued along the trail. Further down the trail, we turned left into a path, surrounded by a beautiful collection of cork trees, until we found the Gaduares or Campobuche Marsh, one of the most scenic and calm parts of the route, where we found ducks, turtles, silence and riverside plants.

Now, all we had to do hike up along the river bank until we reached the  Llano de los Tejares once again, home to the ancient “Alcornoque de las Ánimas”, and return to the Alamillos Inn – right back where we started.


In the next post you´ll find the 5 best tips for this route. 😉