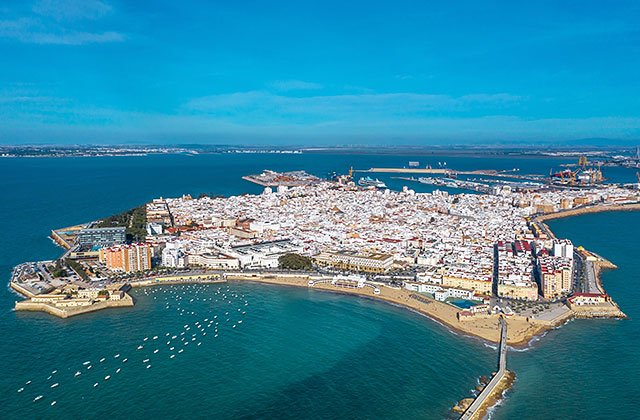 Cádiz is one of the oldest cities in Western Europe and is steeped in history and charm. Contained within a Natural Park, this town has charm in every corner. It is different from other Andalucian capitals and is popularly known as Tacita de Plata (Little Silver Cup). Some say the nickname comes from people who would sit outside and drink coffee from their best cups. Others say it is due to the shape of the bay, while still others say that it is due to the colour of the sea… In any case, excursions in Cádiz are worth it.

Fuerte Hoteles doesn’t want you to miss out on anything and so we have devised a spectacular Cádiz day trip for you to make sure you don’t miss this gem in Andalucia. Here we explain to you what to see in Cádiz so don’t miss any detail.

The best thing to do is get up early for a relaxed breakfast in the hotel and then take the car full of energy. A good time to arrive at your destination is ten o’clock. From then on, pay full attention and devote yourself to enjoying everything Cádiz has to offer.

There is no better way to get a first impression of the city than to explore its historic centre and the sea. You can start walking along the waterfront of the Bay of Caleta which is where, in summer, residents of Cádiz make any day a celebration. Do not miss this panorama with a marine flavour.

Along this path, you will find the Castillo de Santa Catalina, an unmissable historical monument that transports you back to ancient times. Also don’t miss the two Cathedrals of Cádiz. 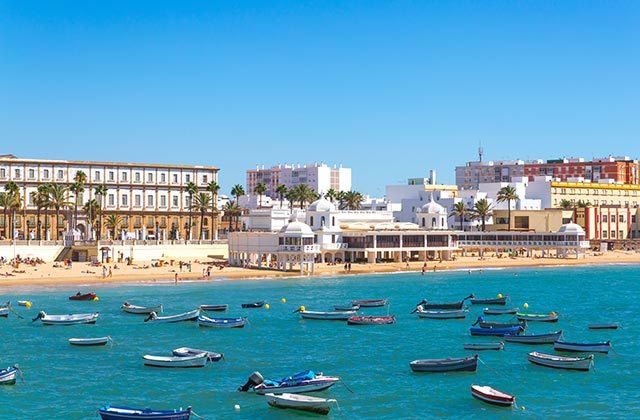 On one side is the Santa Cruz on the sea, although the locals call it the New Cathedral in contrast to the Old one (Catedral de la Santa Cruz) built by Alfonso X the Wise.

It has a Latin cross-shaped floor and three naves, dividing the space using sets of columns. The altar is a neoclassical temple dedicated to the Immaculate Conception. Around the perimeter of the temple are various chapels.

It would also be interesting to visit the Tavira Tower, located in the heart of the old centre. This tower was designated the official watchtower of the port of Cádiz, being the highest point of the city since it is 45 metres above sea level in the heart of the old centre. Through the camera obscura, you can see the most spectacular views of the city. 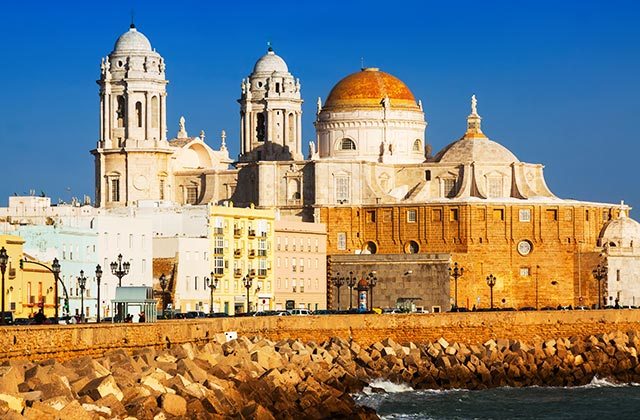 On our tour of the neighbourhood of El Pópulo, located at the entrance of Old Town, between the City Hall and the Cathedral, we find the oldest part of the Cádiz capital. Being in El Pópulo is feeling the pulse of the history of Cádiz. Its arches lead us to the place where the Phoenicians, Carthaginians, Romans and Arabs lived. A highly recommended place for tourists in Cádiz.

Here you will find the Roman theatre that was used for Greek and Roman theatrical performances. Discovered by chance in 1981 after a fire in some warehouses, it was constructed by order of Lucius Cornelius Balbus “Minor” in the first century BC and is the second largest in the Roman world, surpassed only by the theatre of Pompeii in Rome. If you are an art lover, this is not to be missed.

Finally, don’t miss the City Hall in El Pópulo. This is the civil building that best reflects the style of the city in its greatest period of historical and artistic splendour. Its construction was started in 1799 by Benjumeda and it combines the neoclassical and Elizabethan styles. The wealth of architectural and decorative elements in its façade and the beauty of the Plaza de San Juan de Dios, where it is located, make it the ideal place to end the visit to El Pópulo and to find a good place for lunch.

Around 10 minutes’ walk away is the Barrio de la Viña. The city of Cádiz reflects a maritime atmosphere that holds the main essence of typical fishing spots. If you are visiting the capital of this province, you should experience first-hand the charm of La Viña. Its streets are filled with joy, and its eighteenth-century buildings and beautiful squares and churches make it unique.

The largest party in Cádiz starts here every year: the Carnival. This neighbourhood begins in La Palma Street and ends at the Playa de la Caleta. It is a place of pilgrimage for all those looking for the best seafood and fried fish in town. Many traditional national folklore songs compare it to Havana in Cuba as it has a Caribbean vibe in every corner.

Before visiting, sit down and enjoy your lunch. You can visit various tapas bars and try the fried anemones and shrimp typical of the region.

To help your food settle, you can wander around this charming neighbourhood and then see one of the landmarks, for both its artistic and sentimental value: the Gran Teatro Falla. The theatre is in a Neo-Mudéjar style and it has red brick façades and has three large horseshoe arch doors on the main façade, with alternating red and white voussoirs. It has a horseshoe shape when seen from above and the floors adapt to it, each one of which is surrounded by a gallery which connects to the access stairs, starting from a large hall renovated in the 20s. But the most important thing here is its significance as it hosts the most important annual event in Cádiz: its carnival. 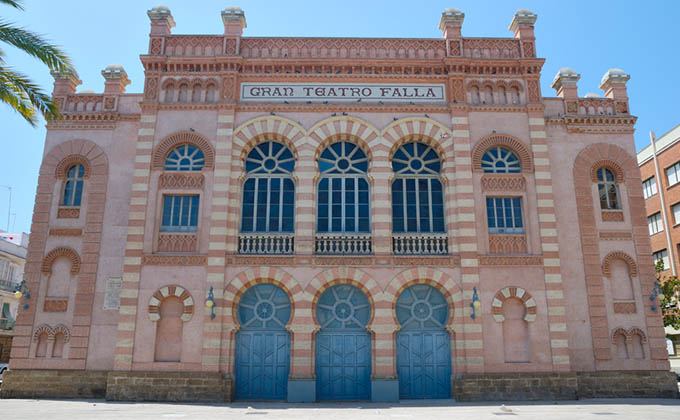 If you continue walking and looking around the city, about 12 minutes’ walk away is the Monument to the Constitution of 1912, a work completed to commemorate the centenary of the promulgation of the Magna Carta known as La Pepa, the first Spanish Constitution. It contains some well realised allegories of War, Peace, Industry and Agriculture, along with reliefs alluding to the Cádiz resistance during the War of Independence; the magisterial allegorical figures of Spain and Hercules and the beautiful group of caryatids supporting the constitutional Code of 1812 which ends the set with its great sense of scenographic ostentation, well integrated into the gardens of the Plaza de España. 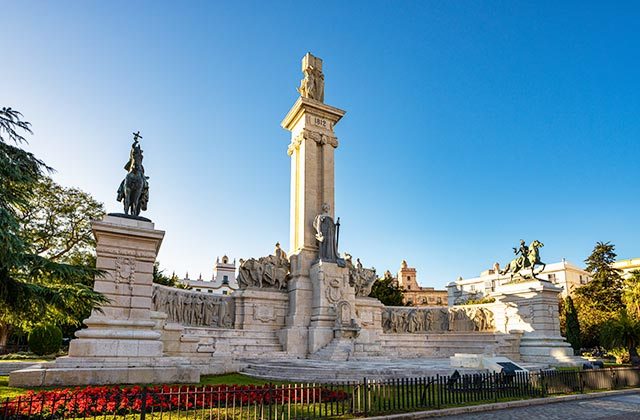 You can also visit other parks in the area and, above all, enjoy the architecture of the city and its people, famous for being the friendliest in Spain. Having reached this point you can set sail towards the Parque de los Genoveses and enjoy your surroundings. When you feel a bit peckish, you can stop for dinner at the Hotel Parador. Trying any of the wines with salted almonds or the traditional local salted fish will introduce you to the authentic taste of Cádiz. We will find ourselves in the Barraca de Cádiz from which we can see a clear and bright view of the Bay of Rota.

Fuerte Hoteles is always the best option to stay in Andalucia, see its cities and rest. The chain has branches where you can enjoy the best of each area throughout the region, in addition to its services. With more than 60 years of experience, this is the best guarantee and the starting point for each experience except you want to undertake. Fuerte Conil  and Fuerte Marbella  are two of these magnificent lodging options from which you can make your trip to Seville.

One Response to “Cádiz Day Trip: see the essentials of Tacita de Plata in just one day”