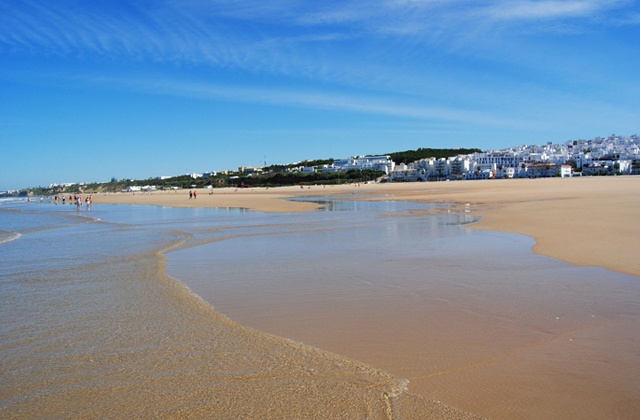 Posted by Fuerte Hoteles on Monday, February 10, 2014 · Leave a Comment

Conil is a delightful town on the Costa de la Luz that forms part of the White Town Tour belonging to the province of Cadiz. Its narrow whitewashed streets, its seafaring zest and above all its endless and sublime beaches, make it one of the most “desired” villages by tourists exploring Andalucia. Here are ten reasons why it is not to be missed:

1. Enjoy a wide range of beaches

Conil, bathed by the Atlantic Ocean, offers beaches for all tastes; limitless crystal clear water, the whitest sand, intimate coves, and stunning cliffs. It is nature at its purest. Don’t miss the breath-taking beaches of Fuente del Gallo, la Fontanilla or Castilnovo. If you happen to prefer something a little more secluded, the most attractive coves are Camacho, Roche, Pitones and not forgetting that of Aceite.

This spot is also ideal for making the most of one of the most popular beaches in Andalucia, El Palmar beach. Although it is true that it belongs to the municipal district of Vejer de la Frontera, it is actually a lot closer to Conil. Dunes, tranquillity and its never-ending pristine sand is the setting for one of the most beautiful sunsets in Spain. In fact, for many people it has become a ritual to go and watch and applaud the spectacular show as the sun tucks itself away behind the magnificent waters of the Atlantic. 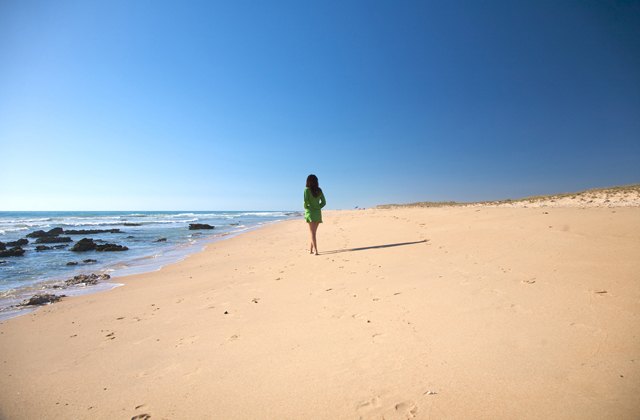 The streets of Conil have many a story to tell through its ancient towers and churches that rise above the uniformity of its typical white houses, its maze-like winding streets, its colourful patios and the delicate flowers that hang from window ledges. Don´t miss the emblematic sites of the churches of Santa Catalina and la Misericordia, the Guzmán Tower and the Museum of Conileña Roots that allow you to relive part of the village´s history. The centre has many charming places where you may savour the one of area´s delicacies, almadraba tuna; a unique artisan dish that is an authentic pleasure for the senses. 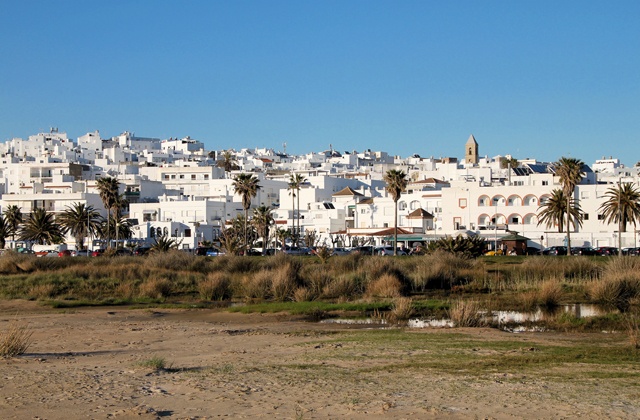 A village, where all visitors find themselves struck by its charm, is that of Vejer de la Frontera. Its most striking feature is its location, found settled on top of a hill at the feet of the river Barbate. With fantastic views and a lot of charisma, it boasts a historical centre filled with the Moorish legacy left by its former inhabitants. Proof of this lies in the two prestigious awards it has been bestowed, declared both a Conjunto Histórico (a national historical heritage site) and awarded the National Beautification Prize. There is nothing better than to finish this visit with a stroll along one of the most magnificent beaches of the Andalusian coastline: El Palmar. 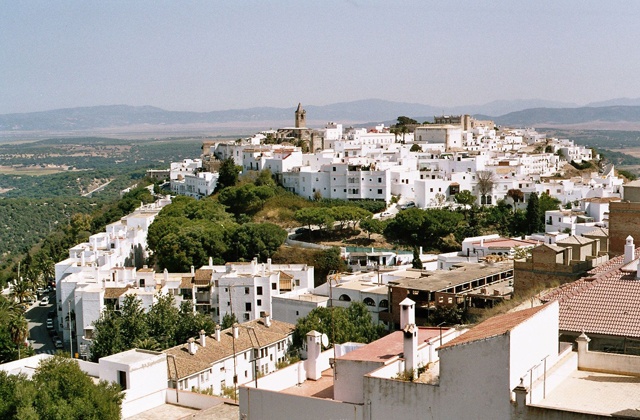 One of the most attractive destinations on the Costa de la Luz is Caños de Meca. A genuine piece of paradise, in which formerly visitors were able to appreciate fresh water natural springs. Its surroundings are made up of various stunning ecosystems, don´t miss the chance of exploring a pine tree forest barely steps away from the sea. Its boundless natural beaches welcome you to not only make the most of the sunshine, but also to wander along them enjoying the sea breeze. If you opt to visit this area, don’t miss out on the Trafalgar lighthouse found on a small islet, which may be reached by a strip of sand. Once there, you will be able to appreciate the over 30m tall lighthouse, which is sure to take your breath away. 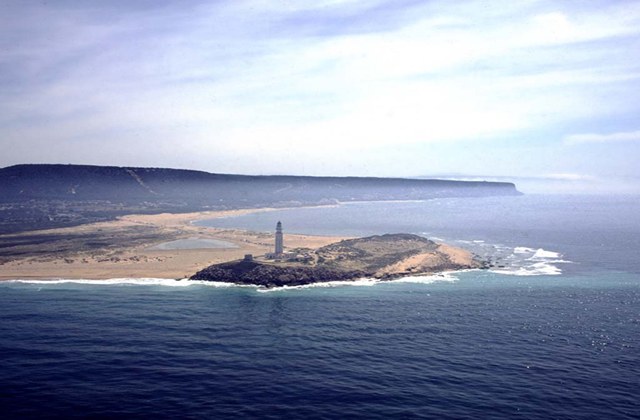 Take yourself back to ancient Rome by visiting Baelo Claudia in Tarifa and capture the harmony found within its perfectly preserved streets and buildings. Accept the invitation to see how people once lived by visiting the forum, the basilica, the temples and other monuments. Right next to the ruins you may make the most of an exclusive beach, said to be one of the most beautiful coves in Spain; the popular Bolonia dune. Here water sport lovers may revert back to their youth whilst surrounded pristine white sand banks. 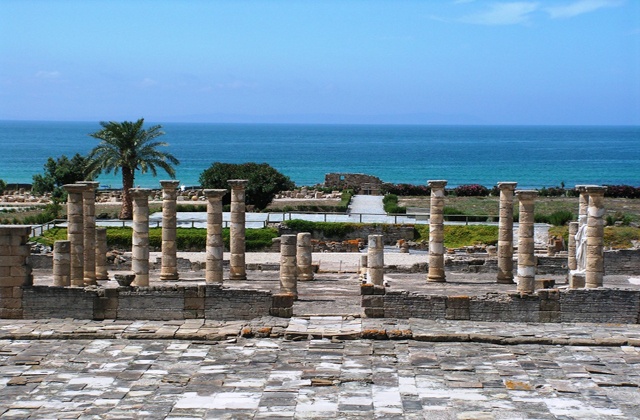 In the beautiful town of Medina Sidonia you may glimpse the history left here by the Arabs and Phoenicians with your very own eyes. It is a charming place which exudes bliss from each and every corner of its white-washed streets and balconies, where you may also discover the art of bullfighting.  A visit to one of the most recognized cattle breeders in the country is also of great interest for those who particularly enjoy this art. At the Alburejos Estate belonging to Álvaro Domecq, the Torrestrella traditional bulls that are often present at the most important international holidays such as San Fermines are found here. The historical village of Arcos de la Frontera is the gateway to perhaps the most beautiful landscapes in Cadiz, with the Sierra de Grazalema just above it and the Guadalete River at the foot of the mountain. Arcos de la Frontera is a unique township which welcomes you to discover its monuments dating back to various centuries (11th to 15th) such as the Duques Castle, the Matrera Gate, its palaces and manor houses, the Basilica of Santa María or the Church of San Pedro. Additionally, the Sierra de Grazalema natural park invited you into the heart of nature to unwind and forget everything except from enjoying the pure fresh air that surrounds you. 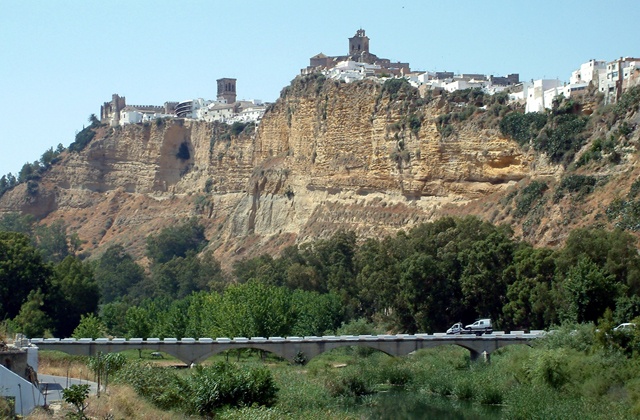 8. Visit the wineries and watch an equestrian show

The wine-growing routes are the main attraction of the village of Jerez, yet not forgetting motorcycling or the equestrian art. A visit to the various wineries that Jerez is home to are a must-do, both for those who are wine lovers and those who aren´t. Wine-making is an art admired by all due to the diverse processes necessary in order to ensure the wine reaches our tables. The products of this area are known all over the world, for example Sherry (Jerez), is a unique wine that may be sampled in various wineries of this zone: González & Byass, Pedro Domecq, Williams & Humbert, Sánchez Romate or Pilar Aranda. Also, don´t miss out being entertained by an authentic horse show directed by the prestigious Royal Andalusian School of Equestrian Art.

9. Explore the oldest city of the West: Cadiz

The fishing village of Cadiz has directly witnessed many significant events that define Andalusian history. When wandering the streets of the city, you will discover intricateness of its streets and you will live and breathe the openhearted atmosphere that its habitants emit. One of the most famous times of year, when happiness takes centre stage in Cadiz, is its Carnival. The combination of culture and pure amusement will make your visit unforgettable. Don´t miss its baroque palaces and remarkable monuments, such as the former cathedral, the new cathedral, several baroque style churches, Tavira Tower, the Archaeological Museum and the Fine Arts Museum, as well as the Viña neighbourhood. Yet what may seem a little strange to you are the city´s nicknames.  Christened ´Tacita de Plata´ (“Little Silver Cup”) due to its irregular shape, as well ´twin city´ referring to its similarity to Havana in Cuba due to their comparable promenades. 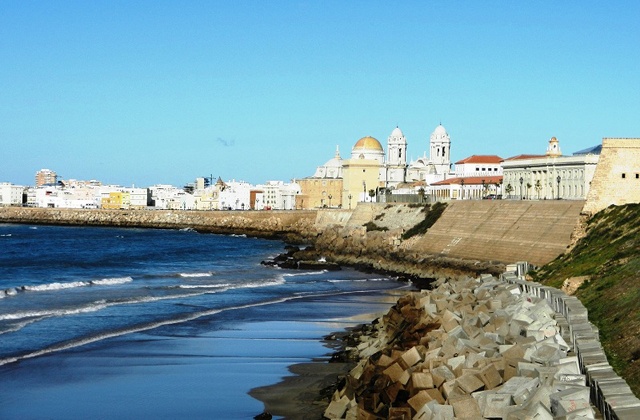 10.  Take a trip to the Doñana National Park

The mosaic of ecosystems that the Doñana National Park encompasses make this a unique place to visit, in fact it is considered as the biggest biological reserve in Spain, and one of the most important in Europe. The park, which is home to a large number of protected species of bird, is paradise for those lovers of bird watching. Those who get the urge to visit the park will get the chance to see the great Algaida Pine Forest, the stunning Bonanza marsh lands and salt flats, and with a bit of luck, the elusive Iberian Lynx, wild boars, deer and the gentle flamingos. You may visit by a guided walking tour or on horseback, in a 4×4 or on bikes, the choices are endless.

Fuerte Conil-Costa Luz Hotel is a resort consisting of Fuerte Conil and Fuerte Costa Luz hotels facing one of the most beautiful beaches of Spain, La Fontanilla beach, just a five-minute walk from Conil de la Frontera town centre. Jerez Airport is 50 minutes away by car, and Seville is 150 km away.