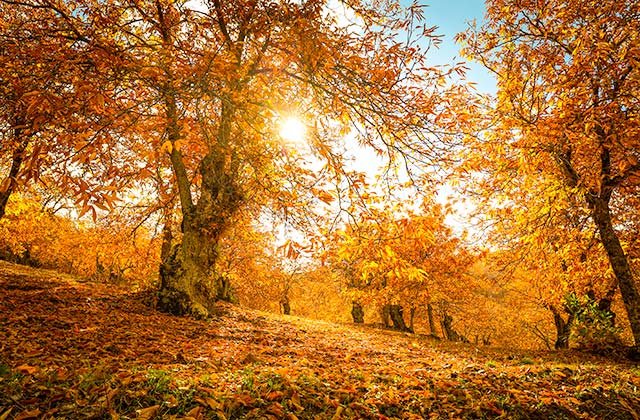 15 woods to see this autumn in Andalucia

Posted by Fuerte Hoteles on Thursday, December 1, 2022 · Leave a Comment

Autumn brings a palette of dark ochre and green colours that paint the landscapes of Andalucian woods. It is the bridging season; the period when nature acclimatises to the rigours of winter. It is the phase that species have to prepare themselves to bear the cold before the new life of spring. There is nothing better at this time of the year than exploring one of these sites and filling your lungs with pure oxygen.

Cork trees, holm oak trees, chestnut trees, pine trees and Spanish fir trees are just some of the plant species you can find at these latitudes of southern Spain if you decide to spend a wonderful day strolling around a forest in autumn. You can enjoy hiking, taking amazing photos or just enjoying a pleasant stroll to gaze at each detail of these ecosystems. Here are 10 natural forests in Andalucia that you must visit if you travel to the south. The pine trees in El Juanar forest, to the north of Marbella in the municipality of Ojén, are tall enough to cover the sky. The pinus radiata, more commonly known as the Monterrey or insignis pine, is native to the west coast of the United States, specifically California, and the Costa del Sol creates its particular landscape, giving oxygen to this wonderful environment. Put on some comfortable shoes and enjoy the hiking trails throughout the area at the place and, above all, dive into this forest that gives you a beautiful view of Málaga at the end. The characteristic Aleppo pine forests of the Montes de Málaga Natural Park protecting soil like a blanket. Without their presence, the rains could cause major flooding. This happened again and again from the fifteenth century until less than a century ago, following the logging of ancient forests to grow vines, olives and almonds. Now you can enjoy this forest and delve into its bowels to fill your lungs with fresh air.

Between the provinces of Cádiz and Málaga is the Sierra de Grazalema which houses one of the most unusual species in the natural landscape, the Spanish fir. Mainly concentrated in the Sierra del Pinar, as it is the wettest place in the Peninsula, this species descends from the Central European spruce trees which formed huge forests here during the ice ages. Today, these firs only live in this area, in the Sierra de las Nieves Natural Park and in Sierra Bermeja (both in the province of Málaga), hence its uniqueness. An unusual view that can only be seen in this place and that will leave you with one of the most curious and significant images of nature when you enter the forests and behold these specimens. 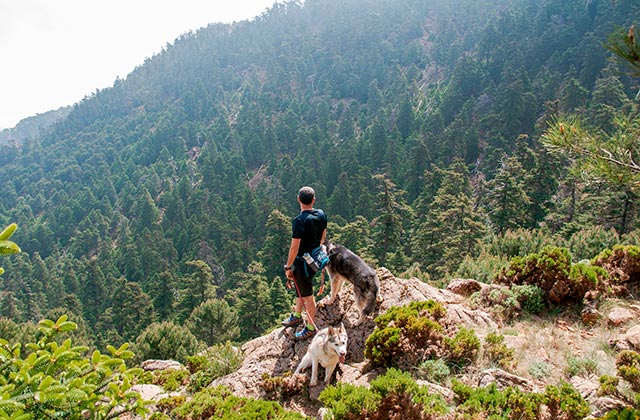 Located on the Mediterranean Sea, Sierra Bermeja is all a natural attraction that you can visit whatever the season, including during winter. With many of its snowy slopes giving you even more spectacular and unique views of the land, sea and snow. Here you will find the Bosque de Los Reales, a Spanish fir grove protected since 1989 by the Junta de Andalucía as a Natural Park. Los Alcornocales (“The Cork Oaks”) Natural Park extends along the coastal area of Tarifa and consists of a huge forest which is home to this species which is widespread throughout the Mediterranean. It is the largest cork oak forest in Spain and one of the largest in the world and is in an excellent state of preservation while allowing people to use the cork. Unlike cork oak forests in other areas where the thickness is low, the trees here form a genuine forest accompanied by rich and varied shrub and herbaceous vegetation close together which ensures natural regeneration of the forest, a good mix of ages, and a very high biodiversity in terms of flora and fauna. The stage for historical events between the Moors and the Christians, and the land of bandits, the Sierra de Tejeda in the Axarquia offers a variety of routes through stunning autumn landscapes. Crowned by the highest peak in the province of Málaga, La Maroma (2060 metres tall), also offers the traveller forests, waterfalls and gorges that run through some of the most beautiful villages in Málaga. Typical white villages where Moorish influence is evident with its narrow, steep streets, adorned by all kinds of flowers. One of the highlights in the area is Canillas de Aceituno, the starting point of various routes, where the bar Ángel offers the most traditional local dishes. Do not miss their roasted goat and churros in the morning to warm yourself up. Although it is also formed by oaks, mountain ash or maple trees, this forest is one of the most unique and it could be said that it is a forest of rocks, where many plant species have adapted to grow between their cracks.  The natural landscape of El Torcal de Antequera runs through limestone rock formations over 150 million years old, formed by marine sediments during the Jurassic period. It is certainly one of the most important and unique karst landscapes in Europe, and it deserves an autumn getaway! 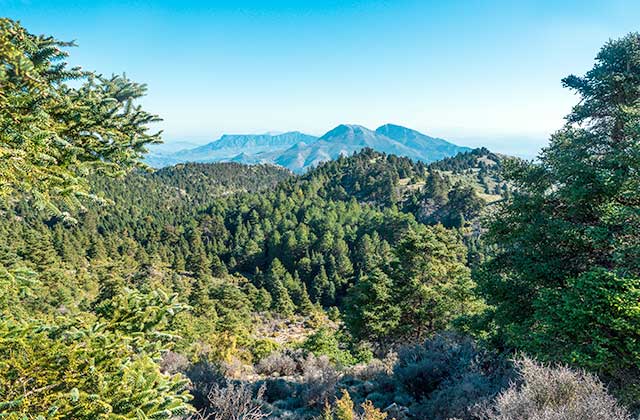 Spanish fir groves are one of the most beautiful forest formations on the Iberian Peninsula, and they are typically pure, dense, dark and moist forests, typical of northern regions, especially during the winter when a white blanket of snow covers them. Twisted old trees are often mixed with young pyramid-shaped ones, accompanied with characteristic undergrowth and a special fauna. All this can be found in the Sierra de las Nieves where you can also enjoy nature. Sign up for the landscape photography tours which are organised there. The chestnut tree is one of the most characteristic species in the Genal Valley. During autumn, it provides an unmatched view. You could say that this is the image of autumn par excellence in Málaga, full of colour and beauty.  It is nestled in the Serranía de Ronda along the River Genal valley, and is also ideal for collecting mushrooms. Remember, though, that you must be accompanied by an expert in mycology, as there are many species that can be fatal. In addition to the chestnut, the black pine, the oak and the Andalucian gall make up these thick forests which cover many villages all perfectly integrated with nature such as Genalguacil, Parauta or Igualeja. The Sierra de Mijas hides a beautiful Mediterranean pine forest from where you can spot the Costa del Sol. The journey is not easy due to its steep terrain but the experience is worth it. The flora consists of pine trees and abundant Mediterranean scrub, such as thyme, rosemary and palmetto. At lower latitudes, we find a large pine forest repopulated in the mid-twentieth century, together with carob and olive trees, an important food source for chickadees, robins, crossbills and tits, among other animals, which take refuge in these forests. Next to Granada is Darro Valley, a fabulous and wonderful ode to autumn surrounded by willows, nettle trees, elms, blackberry bushes and ancient poplars. To visit this area is to indulge in legends that over the centuries have formed the imaginary of Granada. Strolling along the path that passes below the slope of the Generalife while you gaze at the lichen covering the trunks of the old yellow leaf trees, without losing sight of the view of Sacromonte. 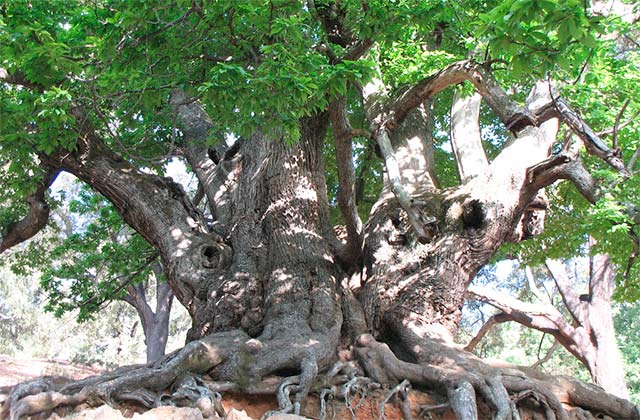 In the Malagan locality of Istán, more specifically at the site known as Hoyo del Bote, we can enjoy one of the prettiest chestnut trees in all of Málaga. While it must be said that it is small in size, it is also important to mention that it is home to some of the most amazing chestnut trees in the entire region, one example being the famous Holy Chestnut Tree, a tree worth seeing, since its trunk measures almost 46 feet in perimeter and 75 feet high. The adjective “holy” comes from the story that tells of King Ferdinand the Catholic holding a mass under this tree before crushing the Moorish revolt in Sierra Bermeja. 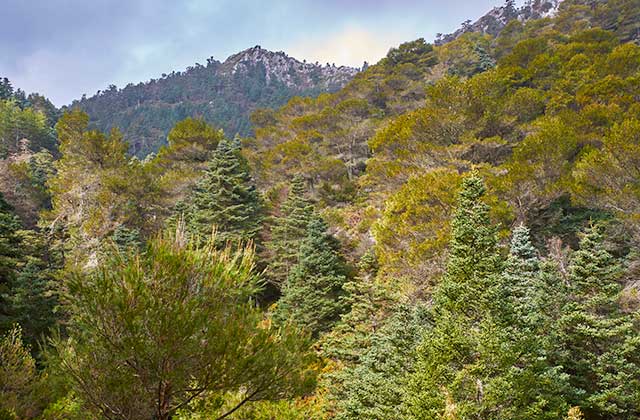 While there are no large forests in the town of Yunquera, chestnut trees have a large presence in its vicinity, and it is no surprise that they are for many tourists the main reason to visit this locality. We recommend visiting its Spanish fir tree forest, since as you ascend (visiting the viewpoints of Puerto del Saucillo and Luis Ceballos), you can enjoy colourful and amazing panoramic views of the different chestnut trees (especially after the second fortnight in November). The Dehesa del Camarote, also called Enchanted Forest, is one of the prettiest natural sites of Sierra Nevada. It is one of Granada’s most impressive forests thanks to its natural wealth, where we can see (wild cherry trees, hawthorn, ash trees, barberries, oak trees, chestnut trees, holm oaks, maple trees, wild roses … Though any season is good for strolling under its trees, it is in autumn when you will be overwhelmed by the different range of tones on display at this site. It is a magical place.

15. THE GALL OAK FOREST OF TOLOX The Gall Oak Forest of Tolox is unique in the world, since there is no other higher than 5,577 ft. This beautiful forest is made up of a very special gall oak, since it has a different genotype from the other varieties in the same family, which is why it has rounder and smaller leaves, and fewer oval leaves.

So, if you want to see something unique in the world, this forest is a must see.

Discover the beauty of Bosque de Cobre in Malaga

If you want to see the lushest forests in Andalucia, make sure you stay at the best hotels. The best option, of course, is Fuerte Hoteles. The chain has branches where you can enjoy the best of each area throughout Andalucia, in addition to its services. It boasts over 60 years of experience and gives you the time to discover these natural places. Marbella, Grazalema or Torrox are some sites where you can find these amazing hotels which are close to all these points we recommend.