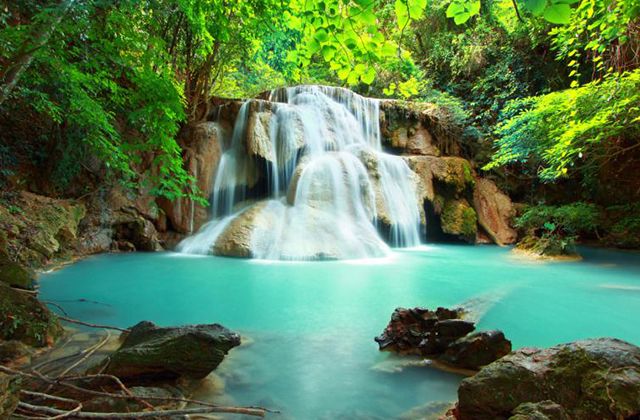 What are the best waterfalls in Andalucia? What are the most beautiful and fastest-flowing waterfalls in Andalucia? The impressive and beautiful view of tonnes of water flowing over the edge of a cliff and breaking against the rocks is one that cannot fail to move you. Andalusia offers much more than its historical and cultural heritage. In southern Spain, you can to enjoy culture, artistic heritage, leisure and the beauty of its natural treasure, so remember that a waterfall does not have to be the highest, widest or most voluminous to be worth seeing. If you travel to these lands, we suggest you put on your bathing suit and tour the 15 most impressive and beautiful waterfalls in our community.

If you want to visit this corner, what could be better than taking an unforgettable kayak trip? This is an ideal tour to take as a family, where even the littlest ones will enjoy the caves, rocks and passageways on the way to the Great Maro Waterfall. Once there, get out your water camera to take photos of this enormous cascade that falls from the Sierra de Almijara into crystal clear waters at a little visited spot in the Malagan municipality of Nerja. The Department of Tourism and Promotion of the Territory of the Government of Malaga has classified this area as a unique corner of the province.

The Cueva del Gato is one of the most visited parts of Grazalema. Many walkers venture to do different hikes until they reach this point located between Montejaque and Benaoján inside the Sierra de Grazalema Natural Park. It is a karstic zone of limestone rock where the water has produced an impressive underground world. Right at the cave´s entrance there is a waterfall where many visitors enjoy a refreshing dip in its waters. If you’re a nature lover, don’t miss this spot.

The Caños de Meca route is one of the wildest you will find in Andalusia. Its difficult access means that it preserves its characteristics from years gone by. Once you have passed the nudist beach, the first cliffs begin. After these, the large blocks of stone begin and through a narrow road you reach a cove surrounded by large rocks, where you will find the fresh waterfall and coves that give the place its name. 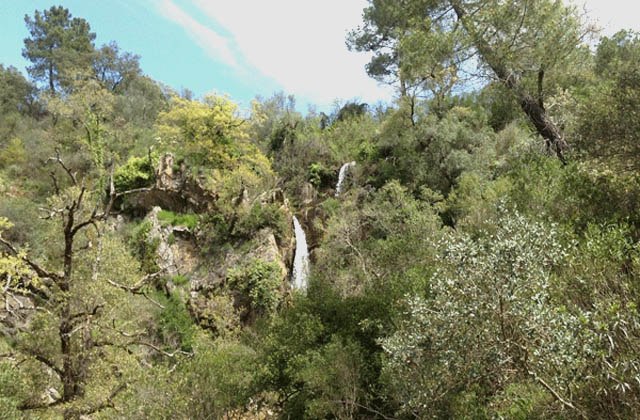 The highest waterfall in the Sierra de Aracena in Huelva is Los Chorros. This natural setting of singular beauty is another of the natural spots you must not miss, especially if you like nature. It is in the rainy season that this waterfall reaches over 49 feet high in all its splendour. The perfect way to enjoy nature and experience the peace and quiet that water offers.

At the Alcornocales Natural Park in Cádiz you will find another enormously beautiful waterfall to add to your tour. It is the Río de la Miel waterfall which, though only 16 feet high, unfurls at great force and a deafening noise. This is nature in its purest form that falls into a pool over 6.5 feet deep and from which some adventurous souls dare to jump.

The route along the River Chillar is one of the most acclaimed in Málaga province for its beauty and it is precisely at this time that it can best be done, since temperatures fall. The great prize at the end of this route is the waterfalls. So, grab your bathing suit to take a refreshing dip in the beneficial autumn waters. This is definitely an experience that is well worth the effort and that you won’t forget.

Coín is home to one of the most visited natural spots in Málaga province, the famous Barranco Blanco where, immersed in nature, you can take a dip in the pool where its magnificent waterfall ends; a pleasant swim in silence that is only broken by the glow of the water. Take a trip to Barranco Blanco and forget all about your mundane problems.

The Cascada de Cimbarra is formed in the River Guarrizas located just over one mile south of Aldeaqumada and almost 7 miles east of Despeñaperros, in the north of Jaén province. The Government of Andalusia has declared this huge waterfall a natural spot, which covers a surface area of 1,320 acres, primarily because of its geological and landscape values. This is an ideal and spacious place where you can rest and take the most spectacular photos of this natural wild landscape. Enjoy the water and the surrounding vegetation and fauna. 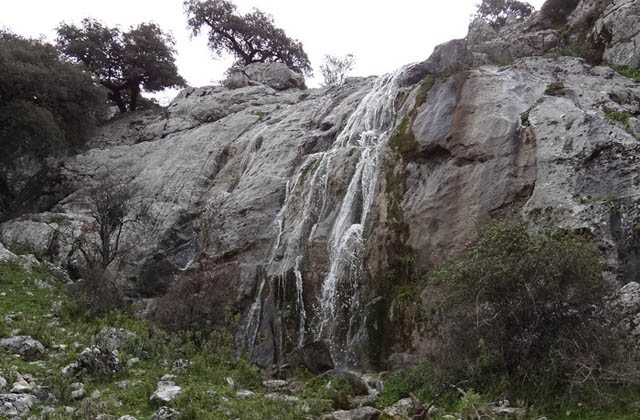 The Mitano Waterfall in Grazalema appears at the bottom of a beautiful small valley surrounded by vegetation. It is divided into two phases: one lower and more accessible; and the other larger in the upper part that can be seen from afar. We recommend you visit this area and pay special attention to its environmental value. At the same time, make sure to immerse yourself in the surroundings, not just in the water, but also in the experience of enjoying the wide variety of birds that inhabit this spot. 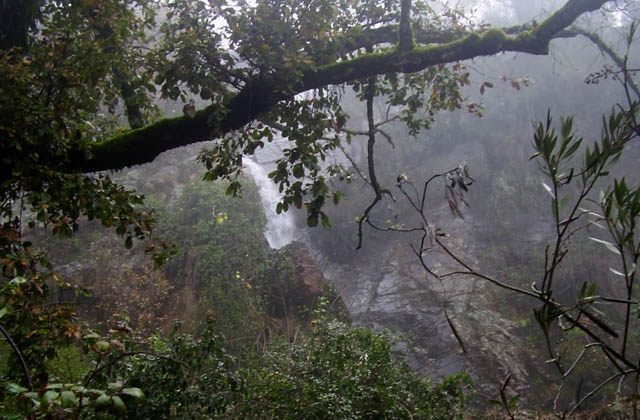 The Santa Ana la Real Waterfall lies amidst ancient chestnut trees in the Sierra de Aracena Natural Park and Picos de Aroche in Huelva. It reaches 164 feet and is made up of three small falls that drop into natural pools. A gift bestowed by nature that you can enjoy during your visit to the Huelva province. Make sure you experience this place while filling your lungs with fresh air. 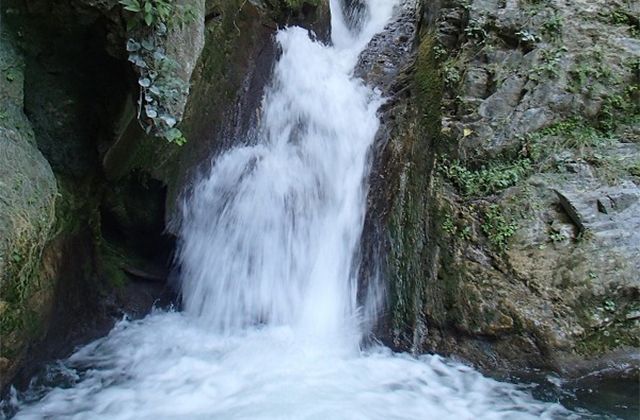 One of the most out-of-the-way waterfalls in the whole of Málaga was given the particular name of Sima del Diablo many years ago. This place today attracts many fans of canyoning, since, thanks to its particular location, it is perfect for starting this activity that gets the heart racing. This waterfall is a combination of falls that flow over a stream that provides the River Genal with a significant flow.

You can enjoy Rejía Waterfall over the River Caballos, which is considered the highest in Málaga. It is an impressive sight, though to reach it, you will have to pluck up the courage because, given its complicated location, you will have to canyon, which we advise you to do with an active tourism company. The way to get there starts at Balneario de Tolox and passes through Puerto de las Golondrinas, which is a beautiful sight, so you will get two for one: a hiking route and the impressive view of a beautiful waterfall. 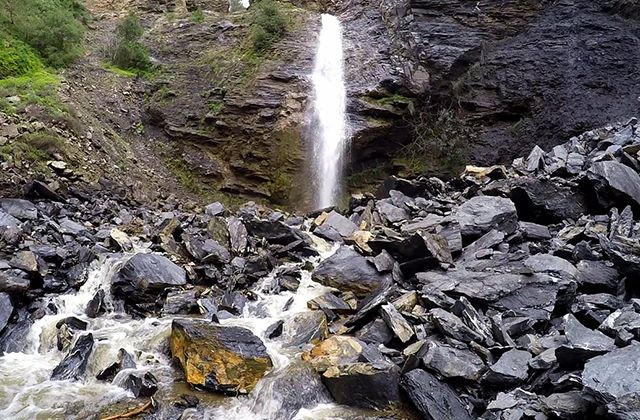 You can enjoy what is known as Cascada de Picapedreros a stone’s throw from the city of Málaga, especially after a few days of rain, since it is not visible year-round, though when it has water, it is spectacular due to its size. The route that takes us to this waterfall is easy to see and especially to follow, since after a little more than half an hour’s hiking you will be able to see the waterfalls of Montes de Málaga. 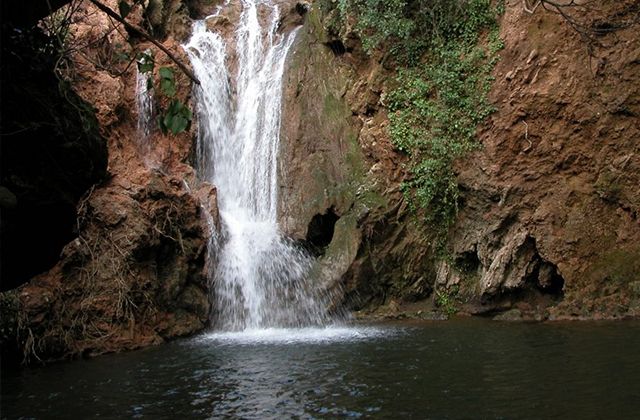 Also known as Cascada del Huéznar, this natural monument is located in a small area of the RiverRivera del Huéznar, in the Spanish municipality of San Nicolás del Puerto in Sierra Norte de Sevilla Natural Park. In reality, it is not the only waterfall, since it is a succession of waterfalls that come about when rain falls on particular limestone formations known as travertines.

Huesna Waterfall can be accessed via the Vía Verde de la Sierra Norte, an old railway route that passes through villages such as Constantina and Cazalla, and that has been conditioned to be used on foot or by bicycle.

The peculiarity of this cascade comes from the fact that in the past the loggers transported the trunks that cut through the course of the Verde River through the Natural Park of the Sierras de Tejeda, Almijara and Alhama, and some of them were trapped between the rocks falling through the waterfall and the rest, as they say, is history since the passage of time and especially the mineralization of the water has caused it to petrify giving rise to this spectacular and unique waterfall.

If you want to do something special and get away this autumn, make sure to visit Andalusia and take this waterfall tour. This time of year, with its gentle pleasant climate, is the most suitable for visiting. Book your trip now! 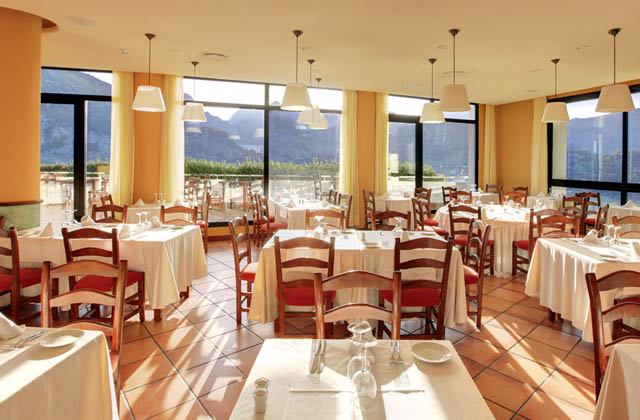 Explore Andalusia’s wild nature and stay in the best hotel chain in the region, which is also environmentally sustainable and respectful. Fuerte Hotels is undoubtedly the best option for your holiday. The chain has establishments where you can enjoy not only its services, but also the best of Andalusia’s geography. Its 60 plus years of experience serve as the best guarantee of service, allowing you to spend your time discovering these 10 magnificent waterfalls. Marbella, Conil, Grazalema, El Rompido, Estepona and Torrox are just some of the places where you can find these amazing hotels.