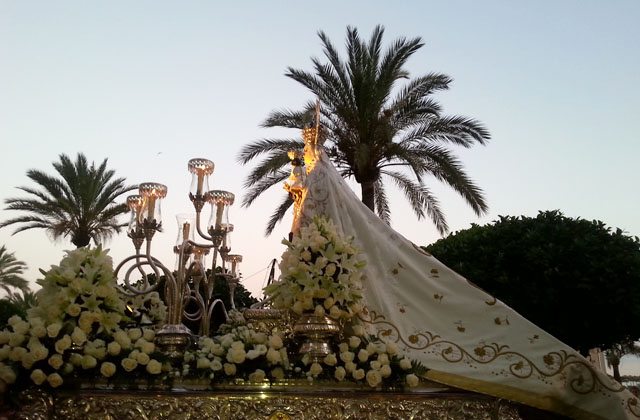 The belief was that the waters were not safe until the Virgin had blessed it, followed by her many devotees; a tradition that is seen as more of a simple curiosity today. You could say that 100 years ago, it was the Virgin that kicked off the swimsuit season, which then was accompanied by long swimsuits that covered much of the body and left much to the imagination.

In those days, local children went to the church for the parish priest to bless their sacramental for alms before the Virgin del Carmen. Their sacramental or scapulars were like two small, protected images of the virgin that hung around their necks, giving “supernatural” protection, or so they thought.

Before getting into the water, swimmers crossed themselves as rumours spread like wildfire that a man had drowned because he hadn’t worn his “protective scapulars”. These were different times.

How different customs were then! Today, the guiris (as foreigners are popularly known to foreigners) even find time to swim in the winter months and if they choose not to enter the waves, its not because they are not blessed, but because there are jellyfish nearby. The scapular was left behind in favour of a “topless” look and if some clueless swimmer gets frightened, its not for a lack of holy protection, but because of their excesses, or a jetski heading their way or rescuers sent to find them were arrving so fast, they could not see them.

Times do change, but the beautiful procession of the Virgen del Carmen of Marbella continues on as before and these traditions help remind us of who we are today.