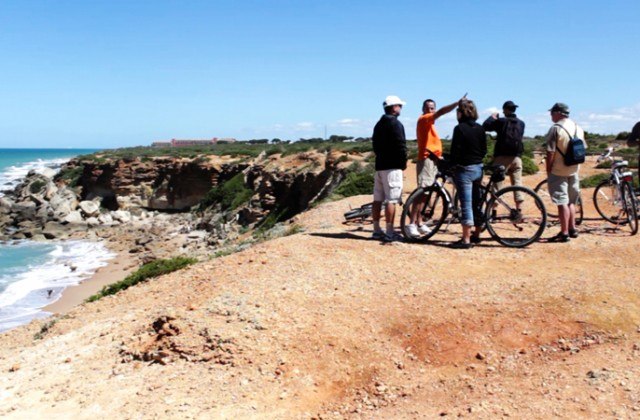 In our previous post, we told you about our bike ride from the Hotel Fuerte Conil – Costa Luz on our way to the Calas de Roche. We followed our guide Jesus along a path until a break at a lighthouse after almost two hours of peddling. And now back to the tour.

At 11.50, we finally arrived in Calas de Roche at last, where we were greeted by the site’s stunning height and unique geometric forms formed by the sea and winds over centuries. There we came upon intimate and occasionally inaccessible coves where some even find the privacy to practice nudisim. A true natural paradise. Beyond, we caught glimpse of the Sancti Petri Castle.

We came to the end of the road, where we prepared to turn our bikes around, but not before the enjoying the icing on the cake – a visit to the local fish market and auction. We parked our bikes and approached the harbor where the boats were docked just at the moment when the Southern European coast came alive and with it, the seafood sale.

Jesus explained that the port of Conil hosts between 70 and 80 boats and usually belong to families from the area. Many turn out between 1 and 7 am to spend much of the day chasing the day’s catch. As we arrived, we saw that the fishermen had enjoyed a lucky day.

Stipes, sole, cuttlefish, snapper, pandora, boquirrones, dogfish – the the top of the market, we could see it all, including how the auction worked. On a tape conveyor, a fish is presented across a small stage where fishmongers and restaurateurs from the area are free to choose the best of the merchandise available. It is the time to auction! 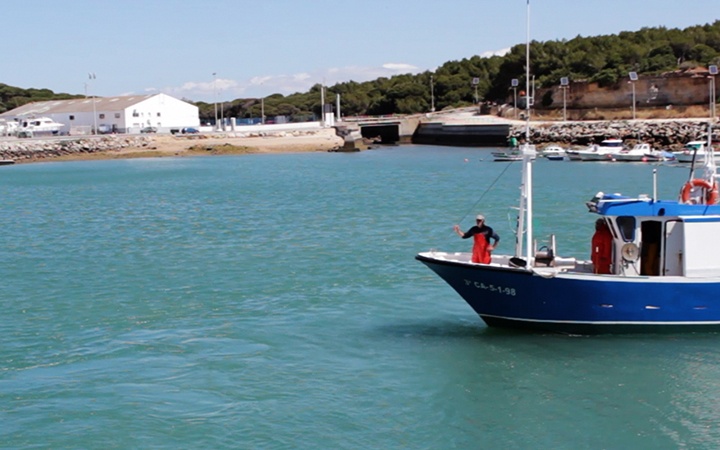 While we went to the fish auction to see fresh fish up close, once there we realized that the seafood of Conil is certified as being the product of “responsible fishing”, which ensures that the port in question follows a code of conduct base on respect for the marine environment and supports the sustainability of fishery resources.

At this last stop along the route, we take a chance to chat with our fellow travellers to get some idea of what they thought. “It was an unforgettable experience – I’m used to cycling in the mountains, but at sea level, it was a whole other feeling”, remarked one German guest.

Their companion chimed in said that “it’s been a great and its best to do a guided tour, because the truth is for us, it would have been difficult to do it without the help of Jesus who showed us the corners only locals know about.”

As we prepared to leave the market, we noticed our fellow travellers admiring a picture on a nearby wall. They asked the members of the auction about what appeared to be an image of the virgin. They responded that who else would grace the wall by the Virgin of Carmen, the mistress of the seas.

So, at the end of the route – at about 13.00 in the afternoon – we stopped in the market for a lunch of pescaíto or small, delicious fish to satisfy our well-deserved hunger.