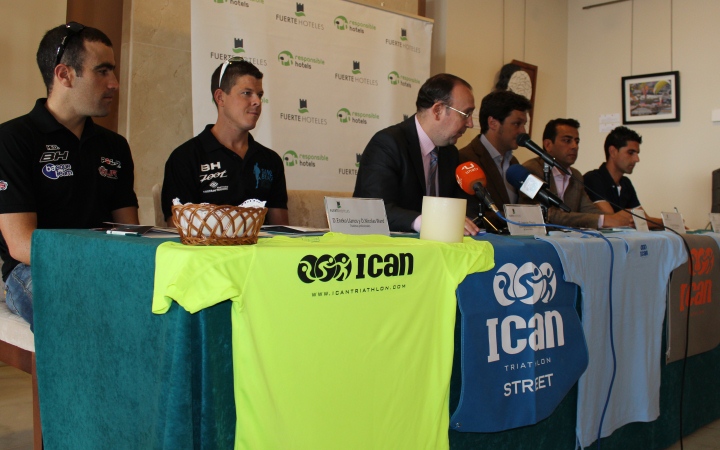 Marbella will hold the ICAN Triathlon 2012 on Sunday 15 April, with more than 1,400 athletes from Spain and abroad.

For the second year running, Marbella is holding the ICAN Triathlon, a top level event that attracts sportsmen and women from all over the world, who are also happy to be in the excellent climate of the Costa del Sol. This time, the event has two modalities: ‘Half Ican’, with 1.9 kilometres swimming, 90km cycling and 21km running; and the ‘Ican 62’, with 1.9km swimming, 50km cycling and 10km running. The event runs from 08.00 to 16.00, with the races starting from Avenida de las Naciones Unidas. Swimming is first, and sets off from the beach at Puerto Banús in the town, and consists of a lap of the triangular circuit, followed by the road cycling race to Ojén, and continues with running, starting from the Avenida de las Naciones Unidas and going along the Paseo Marítimo in Marbella.

This morning, the municipal delegate for sport at the Marbella City Council, Federico Vallés, presented the Triathlon, which will be held on Sunday 15 April, round a circuit made ready in the Puerto Banús area, and which will be attended by 1,400 athletes from Spain and other countries. Most of those taking part are Spanish tri-athletes, although there will also be sportsmen and women from Denmark, England,Brazil, the United States, Ireland, Germany, Belgium, Holland, Uruguay, Portugal, France and Canada, among other countries.

This is the second time that Marbella has been the host for events offered by ICAN this year, and which will also take place in Vallodlolid next July, and Mallorca in September. In tandem with the sports event, on Friday 13 April, a ‘Pasta Party’ will be held for participants at the Fuerte Marbella hotel, and from 12 to 14 April, the ICAN-Trishow fair will open its doors from 10.00 to 20.00 in Puerto Banús, with exhibitors and stands from several sports brands.

The presentation was also attended by the manager of ICAN Triathlon, Sunil Bhardwaj; the communications manager from Fuerte Hotels, Joaquín Pineda; and the chairman of the Andalusian Triathlon Federation, José María Merchán.

For Joaquín Pineda, the support from Fuerte Hotels for the ICAN Triathlon is “yet another action in support of responsible tourism , for healthy activities and, above all, in promoting Marbella as a destination that offers much more than sun and sea”. The sports delegate underlined that this event would not be possible without private enterprise, and so he had to thank Fuerte Hotels for taking part, because whenever the gauntlet is thrown down, the chain is always up to the challenge. Sunil Bhardwaj added that the participants had the opportunity of staying in the best hotel in Marbella.