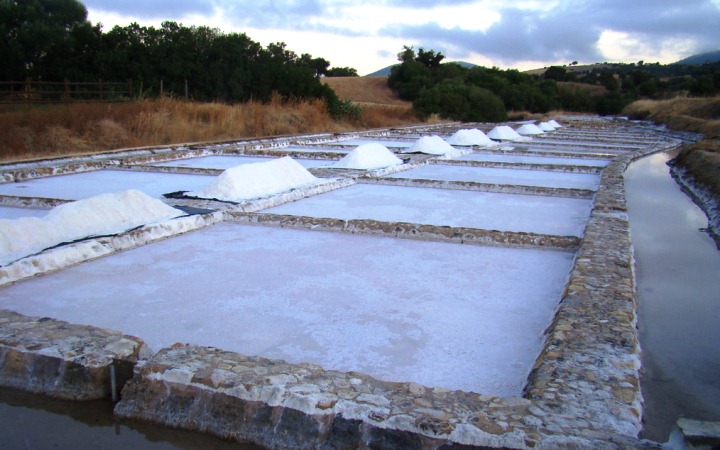 Roman salt pans, a historic gem with great qualities for your health in the heart of Grazalema

Posted by Fuerte Hoteles on Wednesday, April 25, 2012 · Leave a Comment

If some days ago we wrote you about how the leather handbags were produced in the traditional way, today we want to tell you about salt production, an ancient technique that it is transferred from generation to generation in Sierra de Grazalema, Cádiz, Andalucía.

If you had planned to make a charming cultural getaway trip, we have the best proposal to make you: a cultural and natural visit to the Roman Salt Pans in Hortales, situated in the foot of the popular Cabezo de Hortales hill in the local government area of Prado del Rey, only 20 minutes away from Grazalema, in the Route of the White Villages in Andalucía.

These salt pans, of Phoenician origin, exist thanks to the nearby springs. Water constantly comes out of them throughout the year at a temperature of 25 Celsius degrees with a saline content of 28 gram per litre. Watching the water coming out is a spectacle for it creates a white layer in the ground picturing a unique site that is definitely worthy of visiting. These salt pans operate in a fully traditional way, no industrial machinery is used to extract pure salt. The artisan workers that work today in the Iptuci salt ponds work with the same tools that were used in the old times: a rake to harvest the salt, a broom made of olive wood to sweep with, a hoe to ground the salt and a manual trolley to transport it. There is no catch!

At this stage, it is important to tell you about Iptuci town, who served as a refrigerator for the salted meat and fish that was preserved in the area. Besides, in Phoenician times, salt was used as money until the first coin was minted in bronze, with two sides, in one side it appeared a wheel with eight spokes and in the other side the king reigning in that time.

The brackish nature of the water coming out of these springs is explained by the fact fresh water goes through triassic materials of a clayey-loam nature that are rich in gypsum and soluble salts before it springs. In other routes in Spain other brackish water springs have been found (Paterna and Puerto Real).

One of the last salt pans operating in Andalucía

Hortales salt pans are one of the last salt pans that are still operating in Andalucía. Its activity is documented from the 14th century during the reign of Alfonso XI but its activity must have started much before that time as showed by Iptuci settlement dating from the Bronze Age which was maintained in Punic, Roman and Muslim periods. Water was then channeled in a small aqueduct that was made of wood and one of them is still preserved.

Salt harvesting process in complicated because salt crystallization process takes place in the water surface at dawn. Salt harvesting can only take place the days the wind does not blow in order to avoid that the grains of salt sink to the bottom and is done manually with a spade. This salt has an unmistakable flavour and unique qualities. This makes a marvelously light, grainy salt that keeps their intact qualities long after it has been harvested.

Water is transferred to some solar salt ponds that serve as salt deposits. It is then distributed to the crystallizers, where the sun and the wind do their work in the evaporation process. 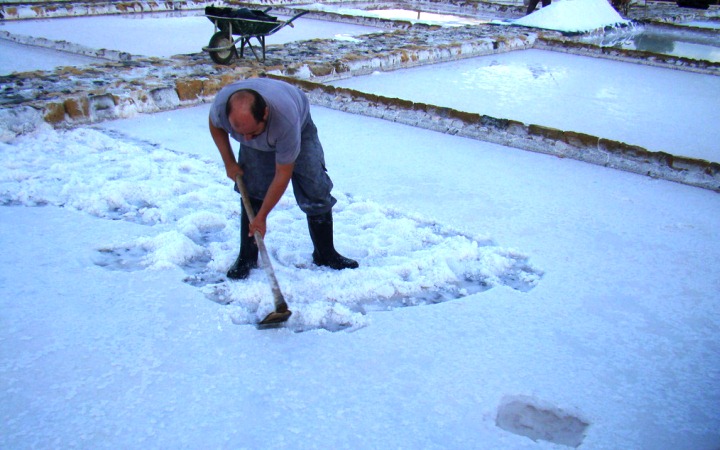 An artisan work that is transferred from generation to generation

José García Barzán knows this job perfectly. This craftsperson runs a family business engaged in salt production, an art that he learnt when he was a child, for the salt business in his family goes back to his grandfather. This traditional job known by very few people in Spain has been developed by four generations in José’s family. If you want to know more about it do not hesitate to come to the First Market of Crafts and Local Products that will take place in the Fuerte Grazalema hotel from 25th May to 1st July every weekend (from Friday to Sunday). José will participate in this fair with a stand where visitors could learn more about the secret of these salt pans and buy his artisanal salt.

Since Prehistory and before salt production by solar evaporation started, salt was obtained by means of working of quarries or chloride mines where rock salt is extracted; or through brackish water evaporation by fire heating until the chlorides are crystallized.

Salt was extremely important for Phoenicians, they were experienced sailors and great traders who started to give great value to salt as a basic product. Salted fish marketing throughout the Mediterranean Sea had its peak from the 4th/5th centuries BC then salt production was bound to be highly intensified. In this regard, numerous Phoenician settlements flourished such as Abdera, Sexi, Malaca and Gardir in the South coastline of the Iberian Peninsula.

It is quite conceivable that in this historical framework, the today so-called traditional salt pans appeared, because they were more productive and cost-effective than the previous ones. These salt pans made it possible the strong momentum that boosted salted fish production and marketing in ancient times. Therefore, the appearance of salt pans is directly linked to large-scale fish industries.

This type of salt brings a lot of healthy minerals to your body such as sodium. Do you want to know more about the benefits associated with salt daily consumption? This salt provides energy to your muscles, it reduces the acidity of your stomach, it stimulates your blood circulation, fluoride strengthen your bones and teeth, it has a strong bactericidal and antibiotic effect, magnesium helps to prevent heart diseases, it is antiallergenic and avoid colds.

We look forward to seeing you at the First Crafts and Local Products Market at Fuerte Grazalema.

Market of Crafts and Local Products in Fuerte Grazalema hotel.

Don’t forget your appointment at Fuerte Grazalema from 25th May to 1st July every weekend in the following opening hours: