Triathlon, a good way to get fit while enjoying your holidays 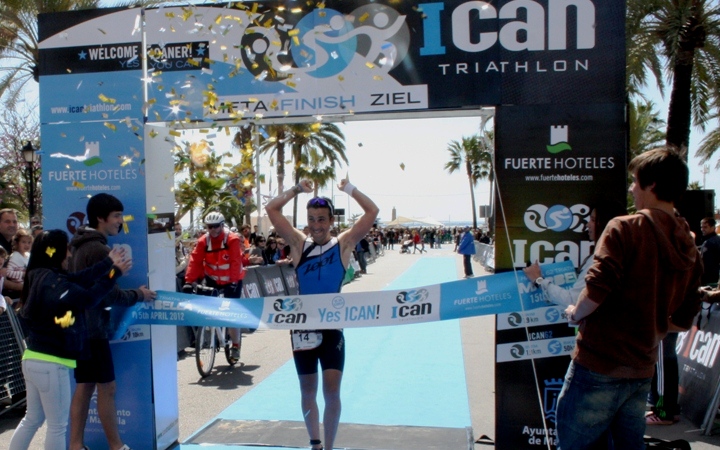 The winners of 2012 Half ICAN Triathlon, which took place in Marbella, are Pedro Gomes from Portugal and Katja Konschak from Germany.

Cycling, running and swimming are sports that are highly beneficial for your health, since every muscle in your body is used. These benefits can be combined with tourism, for after a long sport day there is always some time left to sunbathe on the beach, do cultural visits or sightseeing, relax with a massage in the spa center and taste the local gastronomy. More than 1300 athletes who have arrived to Marbella together with their families have decided to participate in the Marbella ICAN Triathlon that finished two days ago and will be resumed next year. Once again Fuerte Hoteles sponsors this competition always inspired by its philosophy of a responsible and healthy tourism.

As every year the town of Marbella immersed itself in the ICAN to cheer the participants that came from all corners of Spain, Europe and Canada, among other places of the world. The city promenade became the meeting point for tourists and local people who wanted to see the start of the race on foot, followed by the swimming section. The next stage was cycling, probably the most beautiful one which was held between Marbella and the Ojén mountain pass.

Pedro Gomes (Portugal) was the winner of the benchmark event of this year’s Half ICAN after swimming for 1.9 km, cycling for 90 km and foot racing for 21 km in 4 hours 17 minutes and 36 seconds. The Portuguese triathlete took advantage of the descent from the Alto de Ojén mountain, where he distanced himself from Joan Monguillot (Spain), who arrived in second place despite his fall from his bike during this pursuit in a time of 4h 18’ 52”. The third place was for Jon Unane with a time of 4h 20’ 05”.

Mother and sportswoman: a true winner!

In the women competition the German Katja Konschak won the Spanish Saleta Castro, who was suffering from stomach upsets on the last section of the foot race, and finally won the competition in a time of 4h 17’ 36”. This sportswoman gave birth to her second child only a few months ago. Castro from Galicia (Spain) arrived in second place in a time of 4h 18’ 52” while the Scottish Eleanor Haresing arrived in third place in 4h 55’ 39”.

More than 860 triathletes completed one of the two competitions (Half ICAN e ICAN 62) out of 900 sportspeople who finally participated in this high-level intense triathlon day in the streets of Marbella. Not even the wind, which blew strongly at some points or the threats of rains discouraged the hundreds triathletes and fans who filled the finish and transition areas in Puerto Banús, Marbella promenade and the climb to Ojén.