San Juan is the festival that marks the beginning of summer and is a festivity that is celebrated around the world, although in Andalucia it has a special importance in coastal areas. The festival of San Juan is for many people another event to enjoy with family and friends. For others, a magical moment in which the most important thing is to comply with all the traditional rituals of the party. There are also those that combine fun with superstition. On the night of San Juan it begins again; it’s a party of changes and restarts. Those who live the night of San Juan in Andalusia having fun and performing the rituals that promise a series of good omens.

Saint John’s Eve: a pagan holiday turned into a Christian one

The origins of Saint John’s Eve come from a pagan holiday that celebrated the beginning of the summer in the Northern hemisphere. The symbolic purpose of the main ritual, the bonfires, was to give strength to the Sun. From the summer solstice on, the king of the sky starts to “weaken”; the days seem to be increasingly shorter.

As a Christian holiday, Saint John’s Eve serves to celebrate the nativity of Saint John. Thus, the purpose of the bonfires is to announce Saint John’s birth.

Nowadays, Saint John’s Eve is a holiday to celebrate the start of the summer, the warm weather and the vacations. 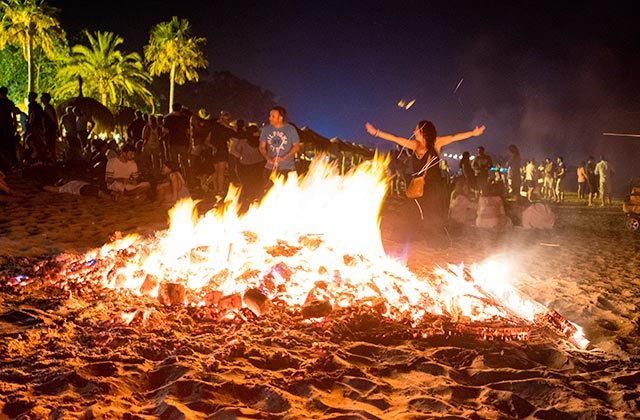 Fire and water are the basic elements of Saint John’s Festival. These elements are the basis of a series of rituals the purpose of which is to break curses and bring good luck, health, beauty and fertility, among other things.

Fire from the bonfires are the key elements of Saint John’s Eve. It gives strength to the Sun, announces the birth of a saint, and it symbolizes purification.

With fire, we get rid of bad luck; by burning old furniture and everything we want to leave behind. Leaping across the bonfires or burning in them papers in which we have written the things we want to eliminate from our lives is another od the rituals of the festival. According to the legend, the ashes from the bonfires have the power to cure diseases. In the Christian version of this celebration, purification by fire could be related to forgiveness of the original sin through the Sacrament of Baptism established by Saint John.

Purification of sins is also related to another typical ritual of the celebration of Saint John’s Eve in Andalusia. In this case, the purifying element is the water; element that Saint John uses in Baptism.

In the pagan version of Saint John’s Eve, water purifies and rids people of bad things and helps good wishes come true. The popular believe is that after midnight water becomes miraculous, cures diseases and it is source of beauty, happiness, and fertility. These believes give place to the rituals of face washing or showering after midnight.

In some cities and towns of Spain, herbs are another element of Saint John’s Eve. It is believed that thyme, rosemary, and St John’s wort, among others, during Saint John’s Eve, have a better healing power. Therefore, it is customary in some places to go picking these herbs after midnight, in the countryside. There is also the tradition of hanging those herbs in the windows of the houses, to receive Saint John’s blessing.

WHERE TO CELEBRATE IT San Juan is the shortest night of the year and how could it be otherwise, the best way to start the summer in Malaga is going to either La Misericordia or La Malagueta. In San Juan, on these beaches, it is typical to prepare a “moraga” with sardines, write a wish on a piece of paper and throw it into the fire to make it come true. In the same way it is very typical in this area the burning of the Júas that the way to scare the evil. In addition, in the Malagueta perform a spectacular pyrotechnic representation that you should not miss.

On the beaches of Torremolinos, especially in Carihuela and Bajondillo, families and friends gather to jump over the moragas and bathe at midnight in the sea. It is also traditional to leave water “al fresco” full of flowers and wash your face in the morning to preserve the eternal beauty. In addition, in this town you can enjoy concerts and different performances to liven up the party. 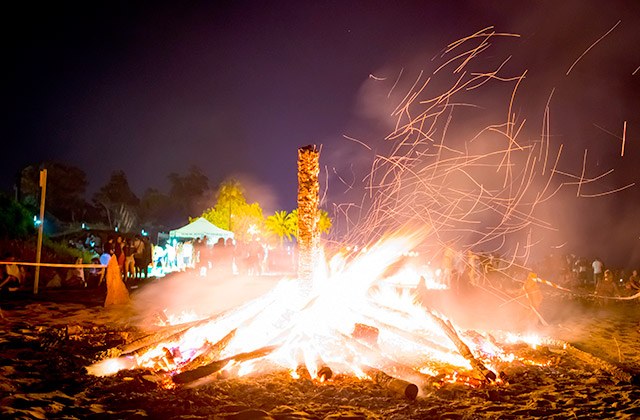 In La Barrosa Beach, a multitude of visitors set the scene of bonfires. Here, as in other parts of Andalusia, it is traditional for neighbours and associations to make dolls that represent the most particular events and then be burned.

Camping on the beach the night of San Juan is allowed if you go to Almuñécar to celebrate around the bonfires. The most special moment is at twelve o’clock at night, a magical moment to bathe in the light of the fire allowing you to reconcile with the evil spirits or to simply celebrate with friends to put an end to all the evils of the year. As every year, from June 23rd to 24th, the whole coast celebrates the night of San Juan. In Huelva, most of the towns bathed by the sea prepare hundreds of bonfires on their beaches to welcome the summer. Some municipalities will have up to 6 of these controlled fires, as in the case of Punta Umbría, whose beach areas of Altair, La Bota, Puntamar, Cazorla chiringuito, Albergue and the snack bar Los Negritos de El Portil will have their corresponding fires.

If you want to experience a different San Juan, what you should do is go to the Baza River and ask for one of the oldest legends of Andalusia, the Legend of the Enchanted. This legend tells that at some point in this magical night a beautiful woman with long hair will approach you with a comb and a weapon and ask you, “the dagger, the comb or the lady?” You must choose your answer!!! In some places of Andalusia, Saint John’s Eve celebration has its own peculiarities; little or big details that give this celebration its unique characteristics. In the municipality of Almuñécar, on the Costa Tropical, the city council gives out, amongst the attendants to the bonfires, traditional bollos de aceite con huevos cocidos (oil buns with hard-boiled eggs) and sky lanterns to make wishes. In this Andalusian municipality, as in many others, people continue with the ritual of face washing or showering after midnight. In the municipality of Lanjarón, Granada, the Water Run (Carrera del Agua) is the singularity of this celebration. Locals and visitors of the municipality run the streets of the town between 12 and 1 a.m.; getting wet by water buckets, hoses, water balloons, water guns, etc. The unique element of Saint John’s Eve in lots of municipalities in Cádiz is to burn in the bonfire the so-called “Juanillos”. These are rag dolls, or dolls of other materials, made for the occasion. In some municipalities, there are contests to choose the best doll and the best bonfire.

In Malaga, these dolls are called “Júas”. Sometimes, these dolls represent a public figure famous for his/her participation in an especially relevant event during the year. The festivals you can’t miss in Andalucia If you wish to discover this unusual  side of Andalucía, don’t hesitate to stay at the best hotels. Without a doubt, the best option is Fuerte Hoteles. The chain has facilities where, apart from the regular services, you can enjoy the best of each spot in the Andalusian geography. Its over 60 years’ experience is the best warranty so you can devote your time to discovering these unusual corners. Marbella, Conil, Grazalema, El Rompido or Torrox are some of the places where you can find amazing accommodation facilities near the spots we have recommended for you.