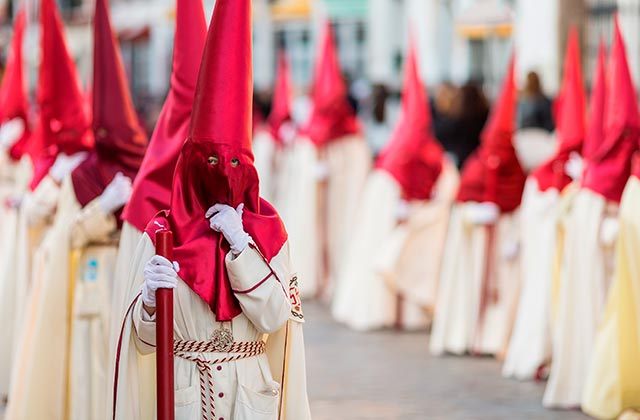 Posted by Fuerte Hoteles on Wednesday, April 10, 2019 · Leave a Comment

Easter Week in Andalucia is one of the most deeply rooted traditions in Spain and each year attracts thousands of faithful who come to fervently experience the most popular religion. All the elements combine to create the Easter week aroma that impregnates the villages and cities of the south; that perfect, divine mix of incense and orange blossom. Easter Week is the time to experience the thrill of the profound and sharp toná flamenco musical form of a beautiful saeta religious song or the absolute silence of a respectful crowd before the carved pieces that are carried through the streets in a state of penitence. Everything surrounding this tradition so full of art and beauty.

Andalucia is the most outstanding part of Spain because of its particular vision of this celebration, executed in such an intense manner. Each procession has its own particular feature. So, here are some moments that, for their singular emotional charge and beauty, we recommend you do not miss. 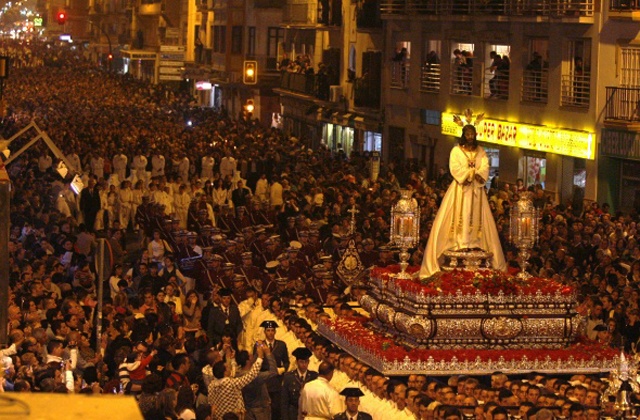 Nuestro Padre Jesús Cautivo de Málaga (Our Lord Jesus, the Captive of Malaga) is the most revered image in the province. This work by sculptor José Gabriel Martín Simón gathers over a million people every year in the streets of the capital of the Costa del Sol. During the procession, the Lord of Málaga’s characteristic white tunic moves in such a way that it looks like it is really walking.  If you come to the province, make sure you’re here on Easter Monday so you can contemplate the beauty of this sculpture and all the devotion that surrounds it. 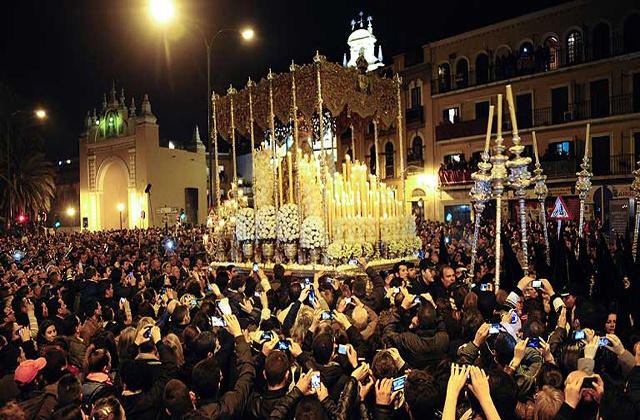 The “Dawn” of Seville takes place overnight from Holy Thursday to Good Friday and is the most special time during Holy Week. Two extreme devotion Virgins come out onto the street: one is the Esperanza Macarena (Our Lady of Hope Macarena), the other the Esperanza de Triana (Our Lady of Hope, Triana). The faithful wait all night, especially for these two images. Another unmissable procession is that of the Great Power, called the “Lord of Seville”, which draws the looks and prayers of all Seville in its path.

3. The Legionaries of Málaga 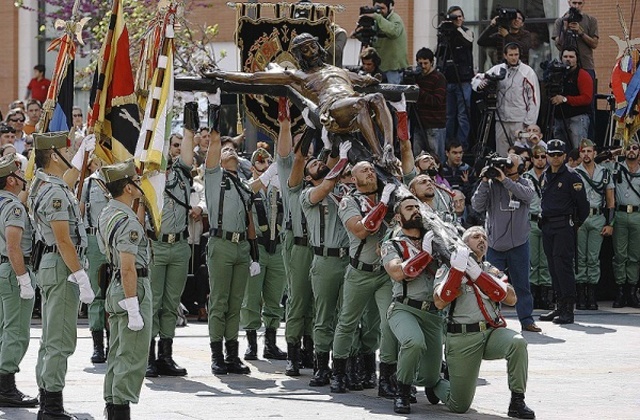 This procession is the most colourful and well-known in the province. It takes place on Holy Thursday and, in the morning, the 3rd Legion Tercio Don Juan de Austria of the Spanish Legion lands. After lighting the Christ of Mena and once night has fallen, legionaries accompany this procession to the sound of military anthems. This is a must- visit spot if you are in Málaga during Holy Week.

4. The Silence of Granada

This procession is one of the most beautiful in Andalucia, not only for the quality of the image of the crucified Christ, but also by the unique setting of the city of Granada. At the foot of the Alhambra, on the slope of the Darro, can be seen this solemn float. One of the most outstanding features is the silence kept by both the penitent and the faithful in its path, only broken by the sound of the drum. Both the public and private lighting on its way is switched off so the image illuminated only by candlelight. 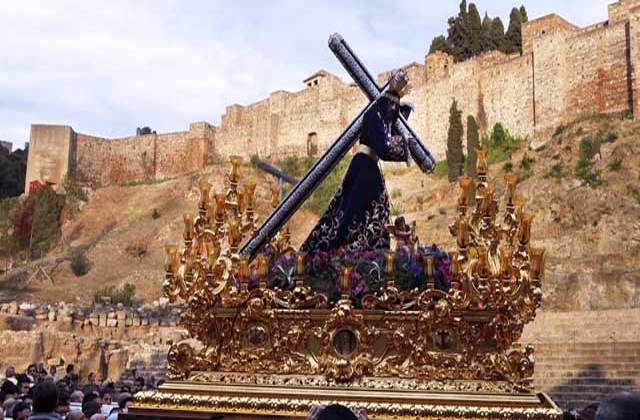 Holy Wednesday is a very special day in the capital of the Costa del Sol. At night “El Rico”, a Nazarene work by sculptor José Navas Parejo, goes out in a procession. Legend has it that, during the reign of Charles III of Spain, a great plague struck the city, leaving the float without men to carry it. Some prisoners were released from prison to carry it and were then taken back to their cells. For this reason, every year, a man is released from prison by the image during Holy Week and blesses all people in Málaga thanks to an articulated arm. Don’t miss this procession if you are on the Costa del Sol during Holy Week. 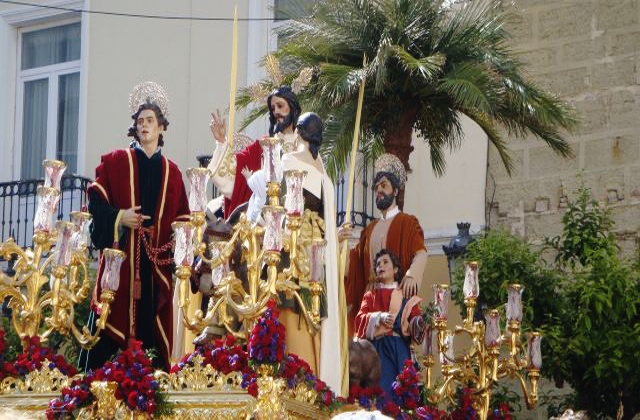 Palm Sunday is a special day of Holy Week, especially for children. In Cádiz, there is a procession for “la Borriquita” which was the first confraternity to leave from a church in the city. Children get together with olive branches and palms and accompany the float symbolising the entry of Jesus into Nazareth. Don’t miss this beautiful procession if you spend a few days on the coast of Cádiz. 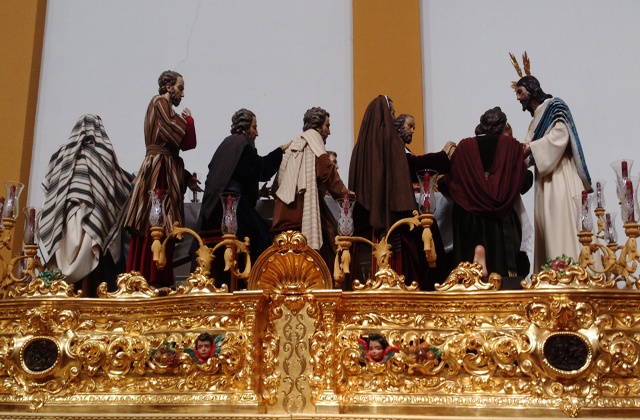 The most brotherly and fervent area in Huelva is El Polvorín, from where the Huelva Holy Supper procession leaves. Palm Sunday is the day on which the capital of the province represents that significant New Testament scene. Founded in 1948 by a group of town hall officials, this step brings together a large number of the faithful every year to come and watch it leave. If you’re in Huelva during Holy Week, don’t miss one of its most significant events.

8. The Christ of the Gypsies in Granada 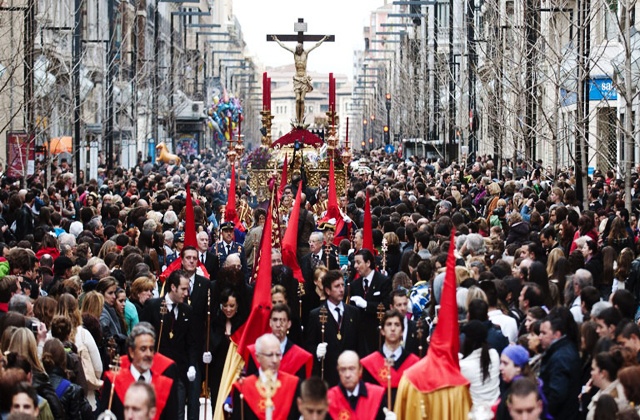 The Christ of the Gypsies in Granada is one of the more striking images in the area in which the procession passes and because of the tradition which surrounds it. Sacromonte is a beautiful and unique area of the city, and at the foot of it is the Alhambra. As they pass, gypsies light fires and sing flamenco to the image of their most fervent devotion. A procession definitely worth seeing if you pass through Granada during Holy Week. 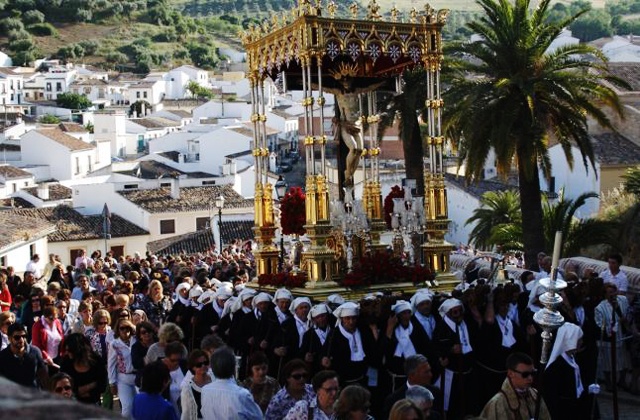 Antequera is one of the Andalusian cities with the most religious tradition. The town has 33 religious buildings, including monasteries, churches and chapels, assets which mix well with the beauty of its surroundings. To all this we must add that Antequera is home to Andalusian goldsmiths who have participated in the work of countless floats throughout the region. If you are in the province of Málaga for Holy Week, come to Antequera. The solemnity of these floats and the size of their images will give you fond memories of this Spanish tradition.

10. The Virgin of Zamarrilla in Málaga 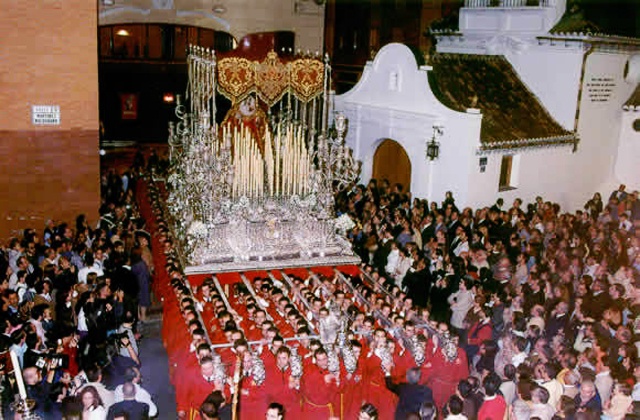 The Virgin of Zamarrilla is one of the best-known and most widely-followed images in the city, especially due to its legend. It is said that a bandit entered the church fleeing the Civil Guard and hid under the skirts of the Mother of God. When the Guard left, the villain, in gratitude, drove a white flower with a dagger into the chest of the Virgin, turning it red. If you are in Málaga for Holy Week, don’t miss this procession on Holy Thursday where you can see all the iconography that surrounds this legend for yourself. 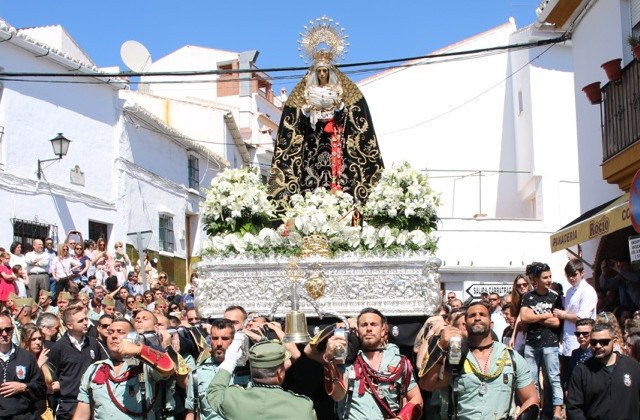 One of the most spectacular moments and that attracts more visitors happens at noon during Holy Friday, when “La Despedida” takes part.  In this act the bearers of throne of Jesus Nazarene and Dolores Coronada, with only 8 tormentors, face to face, knee down three times in a way of farewell in front of the astonished look of the attendees. It stands out that each throne is carried by approximately 60 persons, but like we have pointed out, the act is carried out with 4 in the front and 4 in the back. 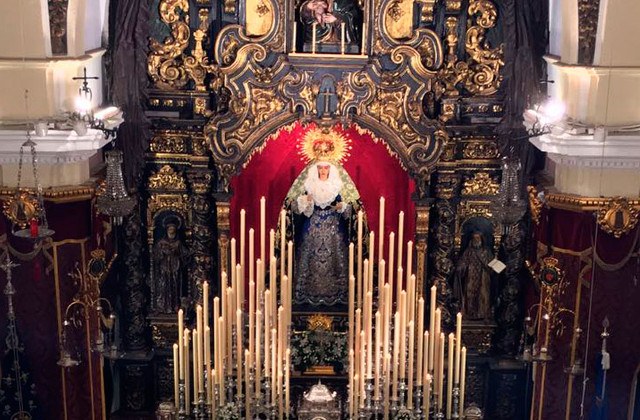 During Holy Wednesday in Sevilla you’ll be able to enjoy of the Holy Christ of Mercy Brotherhood and our Lady of Pity and Holy Mary of Charity in her Solitude, the most “torera” (bullfighter) association in the Andalucía’s capital.  Its history is closely linked to the bullfighting art in Sevilla and its artistic heritage is full of symbology, presenting its house of Brotherhood with multiple and beautiful details related to the bulls festivity.

13. Jesus on the Pillar and Holy Mary of O in Málaga 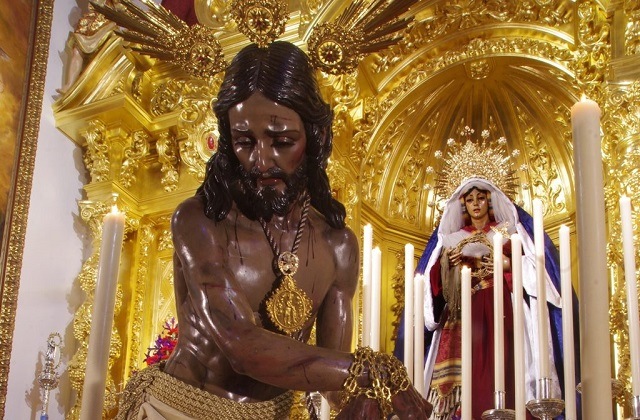 During Holy Monday’s night in Málaga there’s an image of Christ carrying on his back the idiosyncrasy of a race.  The Jesus on the Pillar and Holy Mary of O Brotherhood, the association of “Los Gitanos”(gypsies), comes out with its happy escort and somewhat unorthodox from Frailes street.  As a curiosity, since 1996 the brotherhood has a Lignum Crucis relic, that each Holy Monday is carried on a monstrance on Holy Mary of O’s right hand. 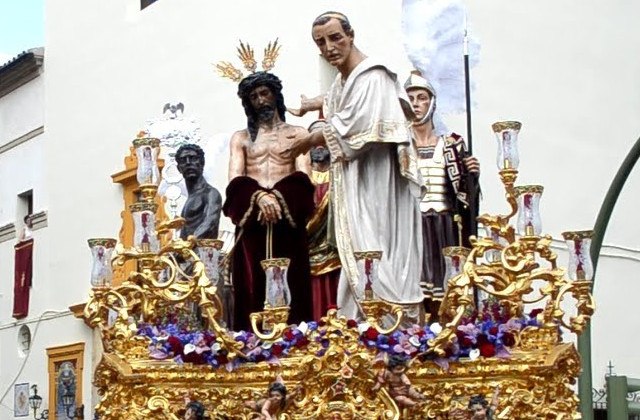 This brotherhood is one of the associations that take out three steps to the street.  The biggest of them, the mistery of the Sacred Presentation of Jesus to the Town stands out by its characteristic walks of the the Trianian steps, mark they maintain from their origins.

The Virgin of Incarnation also preserves its old connection with the Sevillan neighborhood, given that it’s called “Easter Week processions in Andalucia – La Palomita de Triana” since back then this symbol stood on its silver mantle. 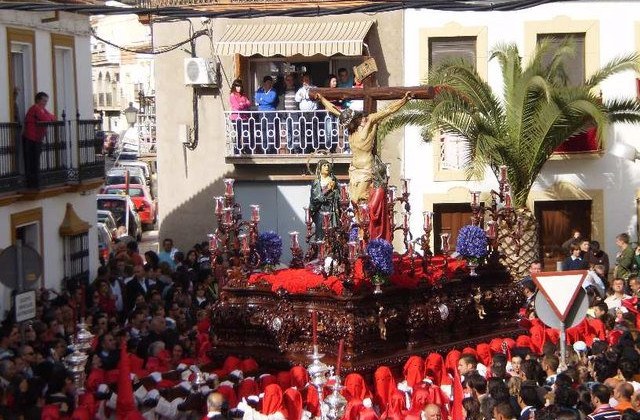 During resurrection Sunday in Alcalá del Valle San Juan’s Run is celebrated, a sacramental car, in which San Juan sees Christ resurrected and runs to tell the Virgin.  This representation gathers up a numerous amount of public on Nueva street, with all the kids carrying hornazo pastries from Alcalá.  For all these values, Alcalá’s Holy Week has been recently declared as National Festivity of Tourist Interest of Andalucía.

16. Great Procession of the Holy Burial

Holy Friday in San Roque is a very pointed out day given that it the critical point of the San Roque Holy Week is celebrated.  The Great Procession is one of the most notable samples of passion of the Cádiz province, which serves as a meeting point for many people of San Roque that live outside the city.  This is the day when all the brotherhoods get together carrying images that were already worshipped on the Peñon before the fall of Gibraltar.

If you’re wondering where to go for Holy Week this year, Andalucia is an excellent choice. Its tradition and passion will captivate you from the first in one of the most important times of the year for the Spanish people.

Processions and Saetas. here are 10 things you should know about Holy Week in Andalucia 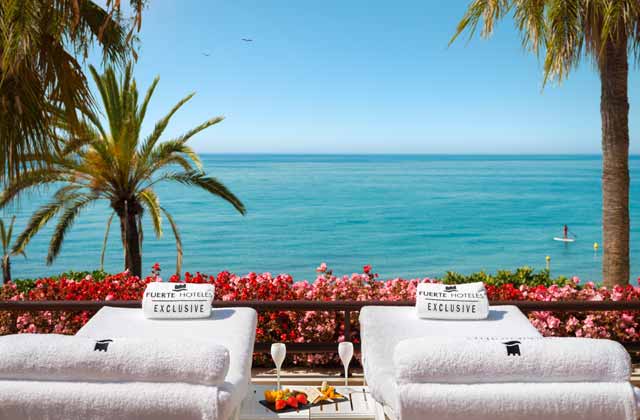 If you’re thinking of going to Andalucia for Holy Week, we recommend Fuerte Hoteles. Hotels and apartments with excellent service and quality according to Tripadvisor, and supported by over 50 years of experience, they are the best choice for a getaway to unwind and experience this Passion Week. Marbella, Conil, Grazalema, El Rompido or Torrox are some areas where you can find great accommodation.