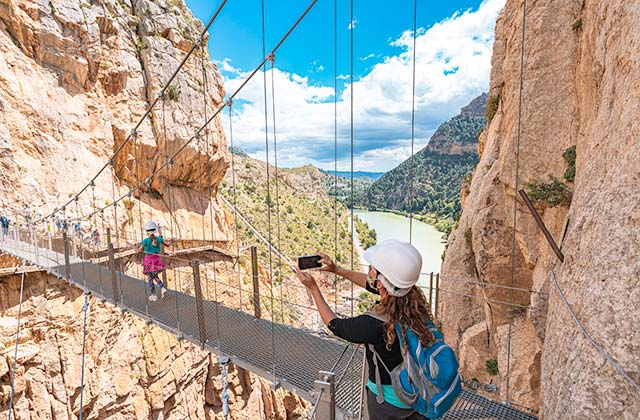 Caminito del Rey, the beauty of a vertiginous route through El Chorro

Adventures, amazing natural landscapes and much history form the perfect cocktail to enjoy an unforgettable experience in this corner of Málaga province. The path, which a few years ago was regarded as the most dangerous in the world, was renovated and opened to the world in 2015 so that it can be walked without risk and the setting enjoyed.

Ever since, this curious 4.3 mile route has seen hundreds of trekkers file along its vertiginous walkways attached to the rock and suspended at a great height. These are some of the aspects needed to venture along the Caminito del Rey or King’s Path, one of the great tourist attractions in Málaga. Heart attack-inducing views, a vertigo challenge, adrenaline-fuelled ascent and unique experience are just some of the descriptions of this reality that is coming to Málaga very soon. But before it does, we want you to learn first-hand about all the secrets of this project.

Make a note of each detail and, above all, clear a space in your diary for an unforgettable getaway.

How to get here 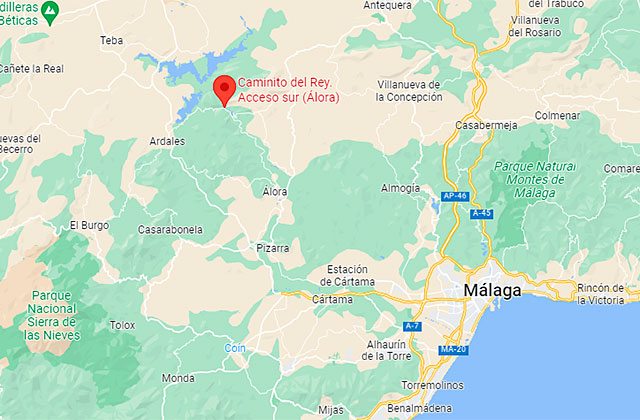 If you are thinking about visiting the Caminito del Rey, read on to find out how to get there. The first thing you should know is that if you are coming from Málaga, you’ll need to take the A-357 to the MA-5403 for around 37 miles. We have to say that the roads are good sand there are even motorway sections.

Once you have arrived, you have two parking options. The first is to park at El Chorro (Álora) in the south zone access and take the bus to the El Conde de Gudalhorce Reservoir. From there to the start of the path there is a route that is approximately half an hour.

The second option is to park directly in the El Conde de Guadalhorce Reservoir (Ardales) zone and after completing the walk in El Chorro, use the shuttle that takes you back to the start.

Here it is important to say that the shuttle costs €1.50 (cards are not accepted) and it passes every 30 minutes. You can also arrive by train, since there is a stop in El Chorro.

What is the Caminito del Rey? 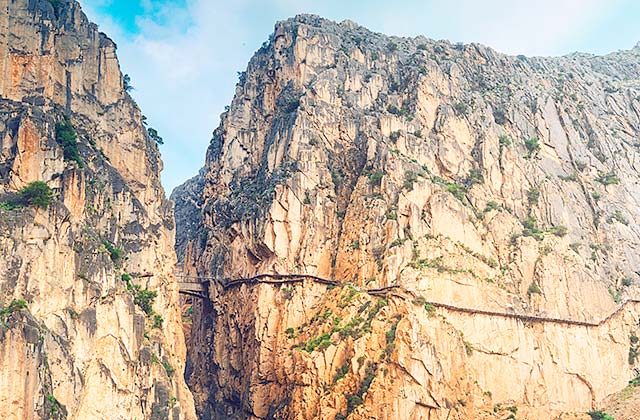 The Caminito del Rey is located in El Chorro Natural Site in Álora (Málaga). It is a hanging walkway that is almost two miles long, barely 3.3 feet wide and suspended 328 feet above the river on the almost vertical walls of the Los Gaitanes Gorge.

Before its renovation, it was known internationally as the most dangerous “caminito” in the world and, as such, aroused the interest of the most intrepid. Despite it being prohibited, many came to this zone to do this small journey high up, risking their lives.

Nonetheless, since 2015, its renovation has provided the infrastructure with one wooden walkway surrounded by a handrail that makes the passage more comfortable and safe. It is a spectacular work that that leaves everyone who comes open mouthed. 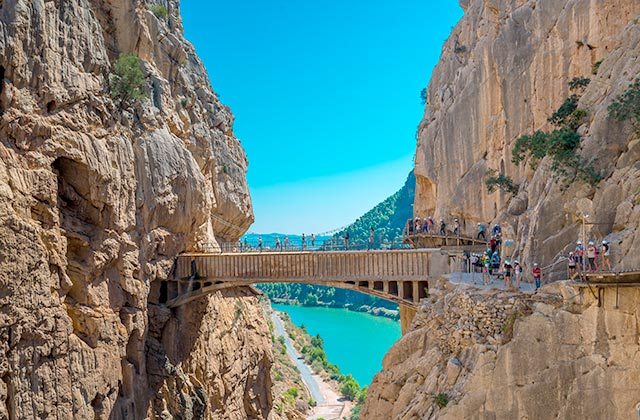 The opening hours of the Caminito vary depending on the season, plus you should pay attention to your social media, since its opening or even at any time closure also depends on the weather situation (rain, wind, etc.). If you buy a ticket on its website, a regular entrance costs €10 and a guided entrance €18.
Bear in mind that there are not too many tickets and they usually go fast even though there are always some that can be sold directly at the entrance. But you need to go extremely early and we can’t guarantee you will be able to get one (this should be a last resort).

Some rules and tips for doing the walkway 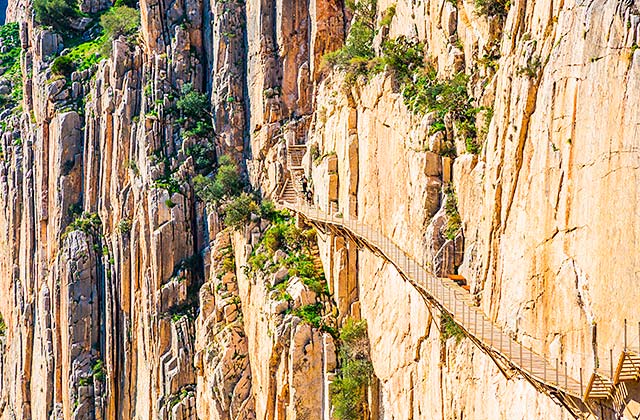 The first thing you have to bear in mind is that you are in a protected natural zone, so you must also remember the followings:

• Helmet. It is a piece of compulsory safety gear during the walk and you must wear it at all times. Furthermore, it is very important that you obey the instructions of the information panels that you will find along the walkway.
• Do not litter. It is a natural space and it is our responsibility to keep it in perfect condition.
• Wear comfortable trainers. While it is a relatively easy route, heels and flip flops are prohibited, especially because it is dangerous for the person wearing them. Remember that it is a trekking route that has high walkways.
• The route is unfortunately not yet fully accessible to all, so it is currently not accessible if you are in a wheelchair or mobility scooter.
• In the case of light rain (if there is moderate rain, the route is always closed), only cagoules can be worn and umbrellas are not permitted.
• Drinking alcohol and smoking are totally prohibited.
• Drones are not permitted to fly in this space. 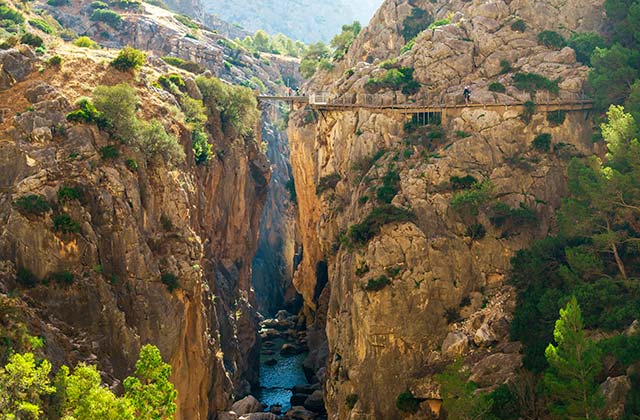 The guided tour is a very good option, especially because in addition to being in several languages, the Caminito del Rey and the actual Los Gaitanes Gorge have a lot of history to tell, so it is a good option if you want to know all about the surroundings of this spectacular place.
Conversely, the self-guided tour is similar to taking a trekking route through the countryside, albeit of course with the advantage of being able to enjoy the walkways and hanging bridges. The drawback of this option is that you miss out on learning about the site’s history and curiosities. 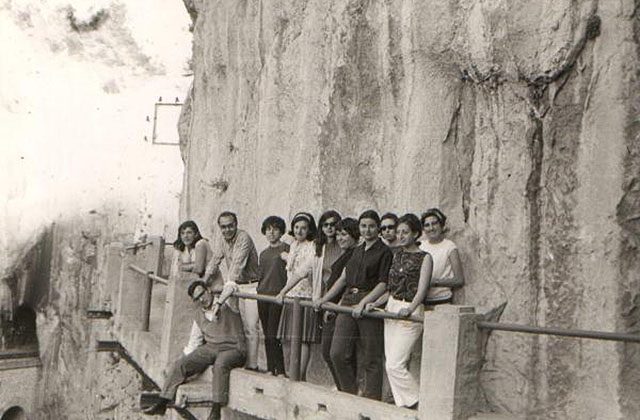 The Caminito del Rey was born as an access between Salto del Gaitanejo and Salto del Chorro. Both belonged to the Chorro Hydroelectric Society which was commissioned to carry out works to facilitate the movement of operators working for the company. So this structure was started in 1901 and finished being built in 1905.

If you are interested in history, this path, in addition to its natural value, is invaluable for the study the twentieth century in Málaga. The trail starts next to the railway tracks and runs through the Desfiladero de los Gaitanes. In time, it became a vital step for the locals where women would travel to buy goods from other villages, children would go to school and for other locals too.

We recommend that you come to this area which will surprise as much as it did Alfonso XIII, the King of Spain at the time in 1921. It was due to this king’s astonishment during his special visit that the trail is known as the Caminito del Rey (The King’s Path). In the late 19th century and early 20 century, industry began using electricity instead of coal or gas. It was at that time that El Chorro Hydroelectric Company created what would then be called “El Caminito del Rey.” The purpose of this pathway was to maintain and monitor the Gaitanejo and El Chorro reservoirs, although this route logically improved the daily life of the inhabitants, since trade increased and children got to school more quickly.

In 1851, the Córdoba-Málaga railway line was completed with the intention of uniting the territories and coal reserves of Belmez and Espiel. The train covered 119 miles and crossed 18 bridges, 8 viaducts and 17 tunnels (most of the tunnels and bridges were located at Desfiladero de los Gaitanes). It should be noted that since this was built up to the arrival of the AVE, or high speed train, this railway route was the only access to Málaga from inland Andalusia. El Caminito del Rey is called thus because in 1921 the then Spanish monarch Alfonso XIII inaugurated the Conde de Guadalhorce Reservoir and took this route, and was so fascinated by it that he gave it this name. It has to be said that this site is home to what is called “Sillón del rey.” We won’t say anymore so that you go and read its inscription. 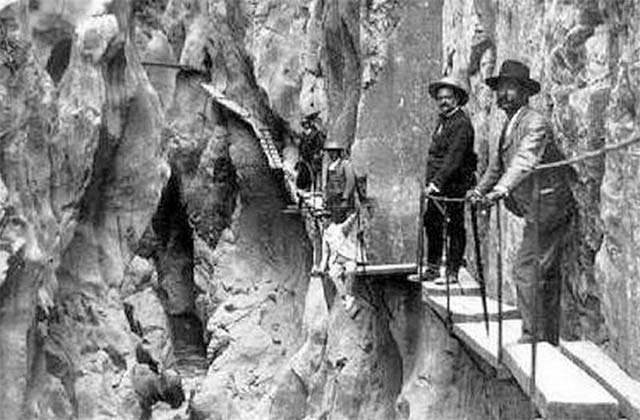 Neither its construction in the late 19th century nor its renovation in 2015 was easy, since there are zones in which the pathway is only a few feet wide and 2,300 feet deep and you have to take into account that 500 tonnes of steel and wood were transported in helicopters.

The death of four hikers

El Caminito del Rey, after years of abandonment, became “the most dangerous pathway in the world” when the fourth of the hikers who risked crossing this historic, creaky pathway died. After its closure, El Caminito del Rey stood gathering dust for over 20 years. 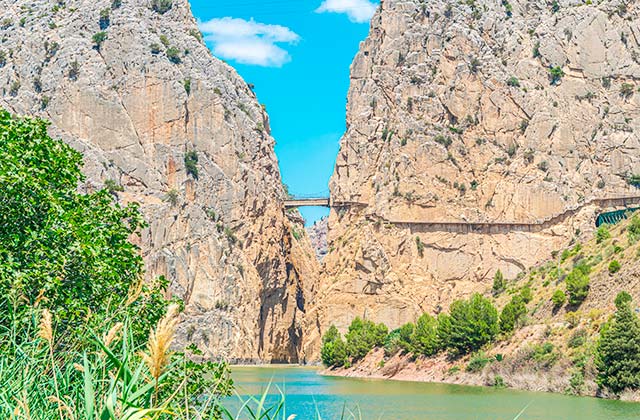 If El Chorro is to stand out for anything in Málaga, it is for its environmental value which permits outdoor sports. We recommend that you walk the trail with comfortable clothes and shoes, and in the first quarter of the year, wrap up warm because the temperatures will change significantly from those of the Costa del Sol.

Another element you cannot forget is the camera to immortalise the experience. The photos others have taken already are amazing, leaving us with some vertigo-inducing views and the beauty of the natural environment. One of the routes being considered for this route will take approximately an hour and a half and cover six kilometres (including the walkway). 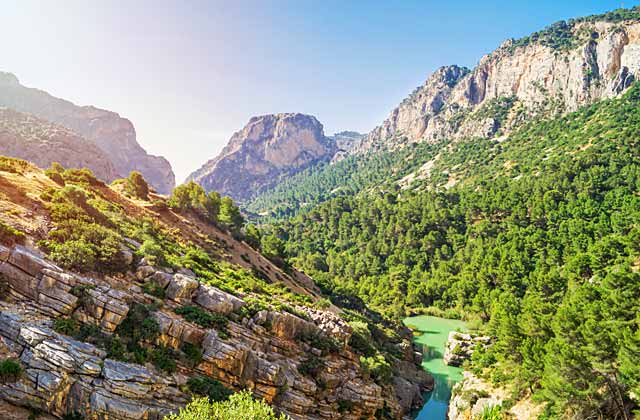 If you are into extreme sports and are passionate about the idea of ​​walking the Caminito del Rey, we recommend you look at the possibility of paragliding, since this approach is widespread in the area and fans of this sport come to Andalucia regularly to do it in El Chorro.

If, on the other hand, you prefer something quieter, consult for other hiking trails in the area. The Caminito del Rey commands the respect of many people who choose not to cross it and, therefore, they are going to put up a trail to observe the gateway from the top of the Desfiladero de los Gaitanes without having to cross it.

The best option for staying in Málaga and sampling the adventure of crossing the Caminito del Rey is undoubtedly Fuerte Hoteles. The chain has establishments where, in addition to their amenities, you can enjoy the best of each part of the province. Its 60 plus years’ experience are the best guarantee. Marbella and Torrox are just some of the enclaves where you can find this amazing accommodation.