Posted by Fuerte Hoteles on Tuesday, September 4, 2012 · Leave a Comment On the westerm edge of Andalucia, in the country just outside the ancient Atalantic city of Cadiz, a forest surrounds the village of El Bosque

Each Autumn, in late September and early October, a rare event occures beneath the trees as dusk falls, turing the sky a deep red above the tranquil Parque de Los Alcornocales. As small groups enter the natural park, enjoying the rare silence and beauty of the Mediterranean forest, something truly special breaks the calm. Through the oaks and cork trees that surround them, visitors catch an exceptional glimpse of the region’s unique wonder as a powerful bellow echos through the land only to be met with what seems like an equally thunderous response. From mountainside to mountainside, these calls go on, signalling not anger or frustration but a calling for company.

This wild and varied Southern Spanish corner is home to a wide range of vegetation and animals. However, this dry and dramatic call belongs to the elusive Rutting Dear. With this call, the male dear spends the autumn evenings in seacrch of a mate, hoping that their bellow will appeal to the right female and keep competing males at bay. These days of late September and October are the deer’s ideal time for seductive courtship and claiming territory, timed precisely to allow eight months before a fawn can be born into the abundence of food and good weather in the Spring.

Showing their antlers, the deer move through the area in heat, with males seeking out as many mates as possible to ensure the long health and strength of their linage. But competition is fierce and they will have to do battle with those males who do not cower from their roar. Fights may ensue, to show strength and determination, though the deer’s antlers rarely allow real pain or injury.

After the fight, the victorious deer continues on with their mate, joining together to birth a baby the following May. This offspring will then stay with its mother until the next mating season arrives.

The deer are responsible for breeding and the forming of herds of females. More than 35,000 such deer lives in the hills of the Parque de Los Alcornocales in the Southern Spanish region of Cadiz and each fall the bellowing sounds flood through the park, making this beautiful ritual of life a natural spectacle for the hundreds of visitors that arrive each year. Will you be one to join this magnificent display this year?

A Stunning Outdoor Experience for Only 12 Euros 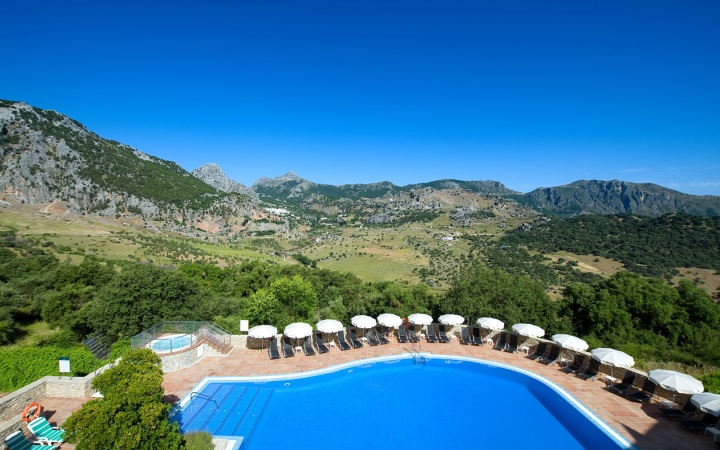 The rutting deer allows for a truly impressive sight that visitors won’t soon forget. To catch a truly spectacular glimpse of this event, small, controlled outposts can be organized on Saturdays through September and October through the Forest Visitor Center, located about 20 minutes from Grazalema.

Each group will be limited to just 10 people, which allows for the silence necessary to hear the bellowing without disturbing the animals and their actions. Each participant will pay 12 euros.

If you decide to join this rare event this year, we recommend staying at the Hotel Fuerte Grazalema, a fantastic four-star hotel immersed in an amazing forest of oaks. It is an ideal natural paradise for a few days of peace and tranquility just a short drive from the Grazalema Forest. It features rooms with spectacular views over the valley, a fabulous pool from which people can see the stunning surroundings, an outdoor Jacuzzi, children’s entertainment and tours of their own organic garden and farm.

For five decades, Fuerte Hotels has worked to support responsible tourism, which lets us coexist with the local environment, culture and socio-economic surroundings in harmony.