Day Trip to Granada: tour the city of the Alhambra in one day

The ideal holiday is a plan which mixes relaxation with cultural excursions. The Costa del Sol is therefore an ideal place where you can enjoy the beach and visit the major cities of Andalucia, one of which is certainly Granada. That’s why we arrange this day trip by car for you drive to the city of Alhambra, where you can enjoy the sea and one of the jewels of southern heritage on the same day.

The best thing is to get up early for a calm breakfast in the hotel overlooking the beach and then get in the car full of energy. A good time to arrive at your destination is 10 a.m. When you arrive, pay attention and devote yourself to enjoying the charm of every nook and cranny, and to sightseeing in Granada. 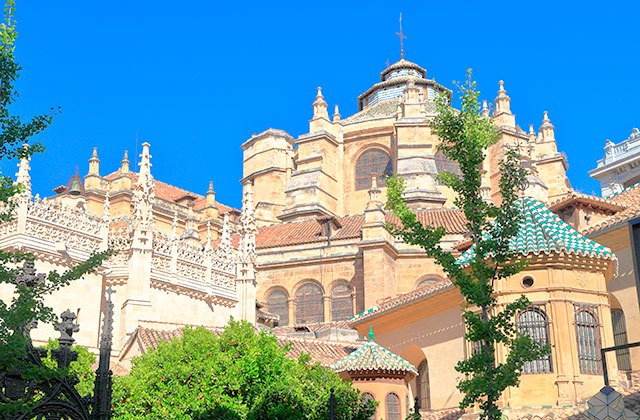 When you arrive in the city, there’s nothing better than touring the historic city centre. You can leave the car parked in the central car park as you can see all the sights in the city on foot. If you prefer, there is a very good bus network. The first must-see location is the Cathedral, one of the stand-out Renaissance works. Inside the Royal Chapel lie the mortal remains of the Catholic Monarchs, Joanna the Mad, and her husband Philip the Fair.

With the reign of Charles I of Spain, many buildings were constructed in the city of Granada, the intention of the monarch being to turn it into a model 16th century city. As a result, the construction of the Cathedral of Granada would be contemporary with the Christian palace of the Alhambra and the chancery.

Once you’ve enjoyed the beauty of the Cathedral, the Alcaicería of Granada (old souk or Arab market) is next. Nowadays, it is dedicated to souvenir shops for tourists which sell local arts and crafts: the popular Fajalauza earthenware goods, embedding or inlaying of wood, and coloured glass lamps. This is the ideal place to buy gifts. Continuing with this Moorish atmosphere, walk towards the Madraza, a 14th century Arab university that features the Muslim Oratory room and, upstairs, the Sala de los Caballeros XXIV which retains an impressive 16th century Mudéjar frame in the room that served as a meeting place for the rulers of the city after the Reconquista.

To end this first stage through the beautiful streets of Granada, there is nothing better to capture the moment than a photo in the Royal Chancery of the city, a building which housed judicial functions in the Christian era. It is currently used as the headquarters of the High Court of Andalucia and of the Senior Prosecutor of Andalucia. 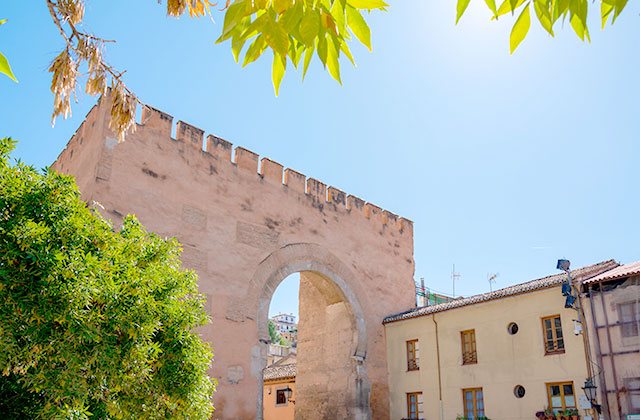 At one p.m., it is time to seek out one of the activities that have made Granada famous in Spain: tapas. In this city, tapas are served free with each drink. We recommend that you try out the (street) calle Elvira for several reasons. Firstly, it is near the historic centre and can be reached on foot. Another reason why you can not miss this place for its Moorish atmosphere and the number of tapas bars you can choose from. You can even keep trying tapas from each different establishment. Garlic chicken, shrimp with garlic, scrambled eggs with broad beans and Olivier salad are some of the unmissable dishes. There are many choices of bars but one must is Bodegas Castañeda (on the street Almireceros), one of the hottest places in Granada, and a good starting point for trying tapas.

The charm of this street will lead you to other Moorish flavours when it comes to the dessert. The sweet morsels of ancient Al-Andalus have a strong presence in this beautiful unique spot. You can try them with a tea to get your second wind for the “main course” of your visit. This is none other than the most important monument in Spain: the Alhambra. 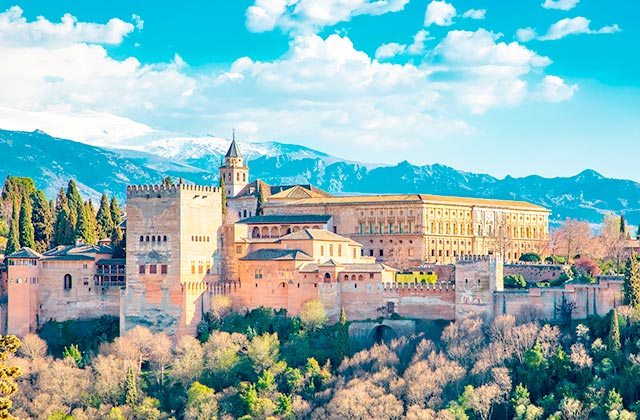 From the street Elvira and after lunch, it’s time to head to the Alhambra. If you go walking, take into account that there is a slope to reach the Arabian palace. Even so, the road is nice and it takes approximately 15 minutes to arrive. Once there, get ready for a unique experience for your senses, especially your sight.

Granada was the last Muslim territory remaining in Spain until 1492, when the Moorish King Boabdil surrendered the Islamic jewel to Christianity. The Alhambra is an Andalucian palace city which is currently one of the most visited and best preserved monuments in the world. Dive between its Andalucian style columns and arches with quotations from the Koran, enjoy the Patio de los Leones with decorated wooden domes which are supported by Mocárabe pendentives and, above all, stroll through its incomparable gardens. Imagine this architectural complex in the Middle Ages and people dressed in oriental fabrics wandering the streets. 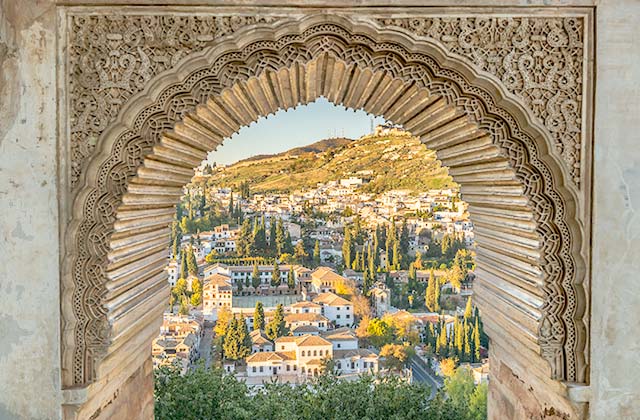 Once you finish your tour of the Alhambra, head towards the Albaicín. We suggest that you take the bus down to the Carrera del Darro and then go up towards that Granada neighbourhood as this path is of the most beautiful sights in Spain. The Albaicín is considered World Heritage. Its narrow streets allow glimpses of its Moorish roots and its cármenes (typical local houses) retain the essence of Arab architecture. The gardens are another of the Albaicín’s Moorish legacies. In the Albaicin, you will find the Mirador de San Nicolás (Viewpoint) which offers the best views of the Alhambra. This is unmissable if you visit southern Spain, and you can also enjoy a drink to the sound of the street performers’ Spanish guitars who gather together every evening to delight visitors with the liveliest flamenco. Even the former president of the United States, Bill Clinton, said he had never seen a more beautiful sunset in his life. After so much walking around and seeing one of the most beautiful sunsets in the world, you will certainly be hungry, so there is nothing better to round off your trip with tapas before returning along the road to Málaga. Albaicin is an ideal area for this where we find, among others, the Aliatar bar (in the plaza Aliatar), also known as the snail bar. When the sun sets, take a bus back to the car park. Take your car and return to Málaga having enjoyed this unique excursion.

A story tale experience: the most charming towns in Granada The best place to stay on the Costa del Sol, enjoy the Mediterranean Sea and take a trip to Granada is undoubtedly Fuerte Hoteles. The chain has hotels where you can, in addition to their services, enjoy the best of each area in the region. The chain’s more than 60 years’ experience are the best guarantee. Marbella and Torrox are some sites where you can find these amazing hotels, exceptional starting points for your unique excursion into Granada.