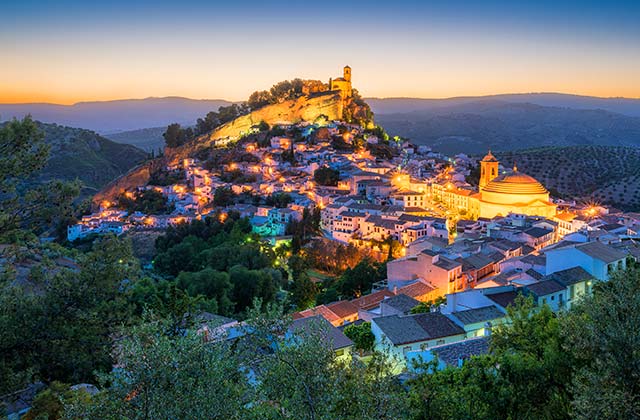 A story tale experience: the 10 most charming towns in Granada

There are many Granada villages that over the centuries have managed to preserve their charm, and this Andalucian province is one of the richest in the Peninsula in landscape diversity and climate. Granada hides valuable treasures to discover, example of this is the Sierra Nevada National Park where the highest peaks of Spain are erected, or the Costa Tropical where you can enjoy rich Vegas full of lush fruit trees. To visit these lands is to find a variety of contrasts that offer besides monuments, history, culture and vestiges of the existence of man for thousands of years, it also offers gastronomy, parties, crafts and above all the hospitality of its people. Discover and visit the most beautiful villages of Granada.

From the spectacular beaches of Salobreña to the practice of skiing and snow sports in the Sierra Nevada through the wonderful villages of the Alpujarra, all of them are a very good option to enjoy a fantastic holiday in order to get to know one of the Andalucian provinces most beautiful in our country.

Enjoy the most beautiful Granada villages 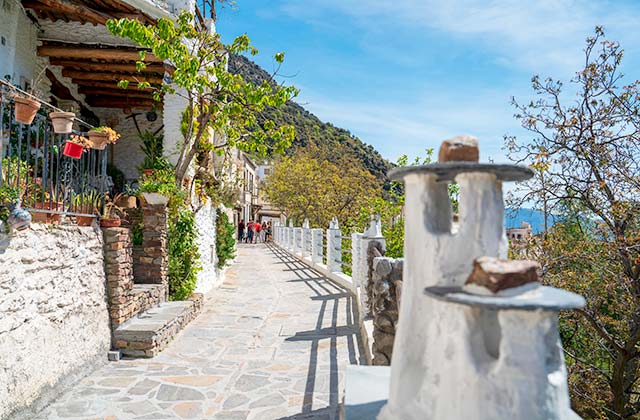 Pampaneira is one of the three towns that is part of what is called the Barranco de Poqueira. This town is famous for its beautiful architectural organization, which has managed to preserve its Alpujarran tradition of whitewashed houses with flat roofs and a hat-top fireplace. It is also especially recognized for the great variety and quality of its craftsmanship ranging from ceramics, to fabrics such as jarapas (thick and coloured fabric used to make carpets, blankets, bedspreads or curtains).

In Pampaneira are also very famous sources since some of them have mineral-medicinal water, and others, such as Chumpaneira is traditionally said to have matchmaking powers because it is said that anyone who drinks from its waters with intent to marry instantly He has a partner, we leave that to the collective image maker. 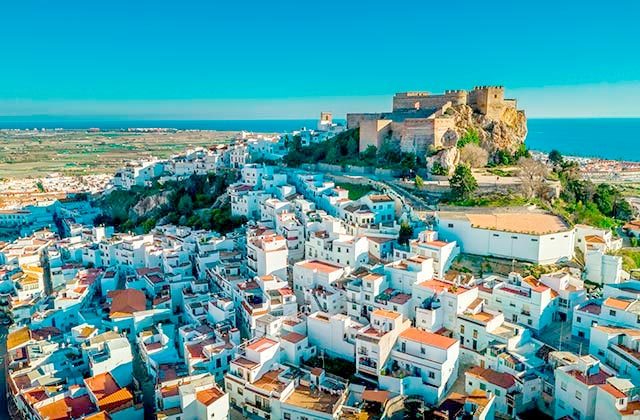 Salobreña is much more than sun and beaches, this town of the Costa Tropical is also walks through its historic streets with white houses that serve as pillars to the Arab Castle, the main legacy of the Nasrids from Granada on the Costa Tropical and where one of the most beautiful bathrooms of this era. In addition, this fortification is linked to the urban area through the Paseo de las Flores a spectacular place that circles the rock with the sea as a background.

But this town offers us much more, because only here you can enjoy places as amazing and suggestive as the Fountain, Barrio de la Loma, the Albaicín or the Brocal. Nívar is located in the Sierra de Huétor, about 1000 meters above sea level. From your Mirador de Granada you can enjoy a magnificent view of both the city itself and the Sierra Nevada In this town you can practice paragliding, hiking or cycling, as well as being a fabulous point for fans of natural photography. You can also enjoy the rock of San Bartolo an important archaeological site dating from the 7thcentury. 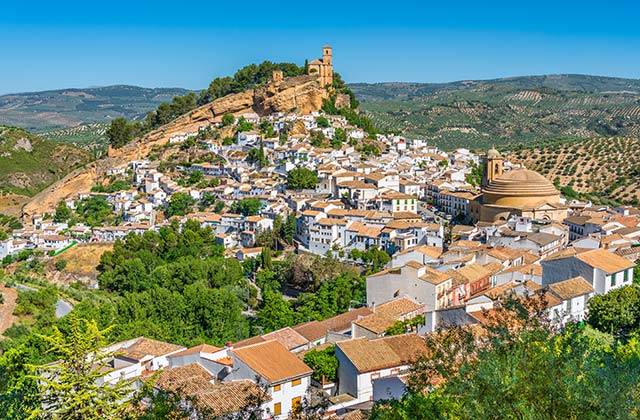 Montefrío is a place that seduces everyone who visits it. In this Granada town you can enjoy the impressive monumental complex that is formed by the Arab fortress and the Church of the Villa. Also worthy of seeing both the Rock of the Gypsies, a beautiful natural area which is accessed from the road leading to Íllora, as well as the various archaeological remains dating from the Middle Neolithic. 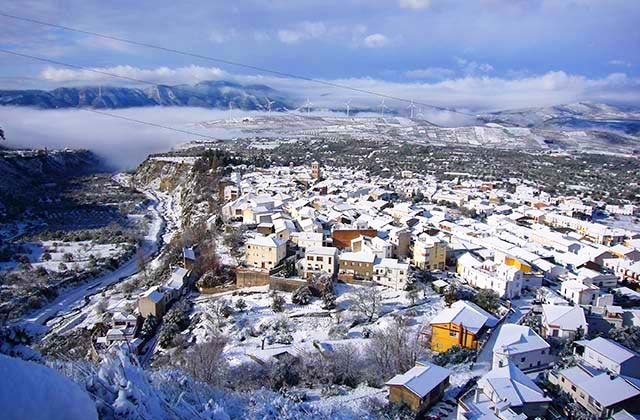 This locality is located between Granada and Costa Tropical and is the highest locality the Valle de Lecrín, at 931 meters of altitude. Its location is a wonderful viewpoint, from where you can see the whole region. Nigüelas preserves in its urban centre the oldest mill of Spain, now converted into a museum, also from here you can see the romantic garden of the Town Hall and the town hall itself, former palace of the Zayas. 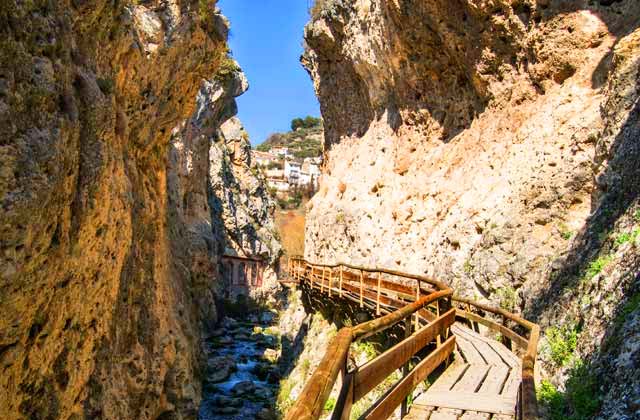 Castril de la Peña is located at the foot of a rocky rock, north of the province of Granada, bordering the province of Jaén and the Natural Park of Cazorla, Segura and Las Villas. Its urban centre recalls its Arab past, this is why this town is characterized by its steep lanes and the uniformity of its single-storey houses, with closed and whitewashed facades. Among its attractions include the Peña del Sagrado Corazón and the El Cantón viewpoint.

A curiosity about this town is that since 1997, Castril has a very special link with the Nobel Prize for Literature José Saramago, because he has a great friendship with the Pilar del Río. Alhama is located in the Sierras de Tejeda, Almijara and Alhama Natural Park. It has a world-renowned thermal spa dating from Roman times, and today offers innovative treatments against various ailments. Its historic heritage is rich and its old quarter is declared a Historic-Artistic Site, among which the Hospital de la Reina, the Iglesia Mayor de la Encarnación, the fountain locally called Caño Wamba and the House of the Inquisition stand out. In addition, this town is the perfect destination for lovers of hiking because its imposing ravines have been catalogued as a natural monument of Andalucian geological nature.

Alhama has two annexes such as the Sales of Zafarraya and Buenavista. 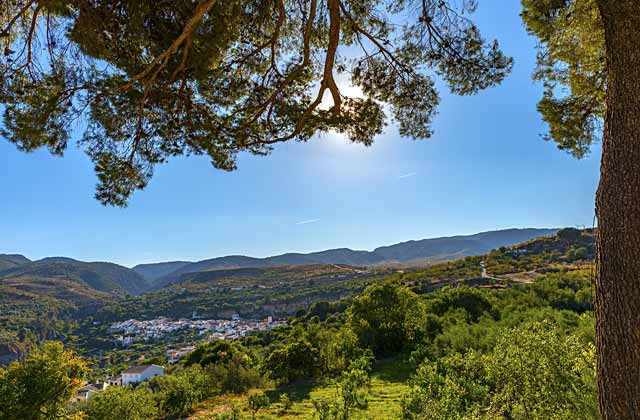 The town is located at the Sierra de Almijara, and thanks to its altitude you can enjoy spectacular views of olive trees and pines, dotted with incredible pits. Albuñuelas is the clear representative of the traditional picture of Andalucian urbanism with narrow streets of whitewashed houses. In its mountains you can enjoy activities as fun as paragliding, canyoning, caving or mountaineering, so there is no excuse to enjoy this enchanting enclave. You will be able to find Trevélez in the skirt of the Mulhacén, reason why its municipal term is located in the heart of the Natural Park of Sierra Nevada. A very particular fact of this town is that its urban centre, considered one of the highest in the Iberian Peninsula, preserves the traditional architecture of the Alpujarra villages, steep streets, small houses anchored with flat roof, and chimneys with their corresponding hat.

Although it must be said that the true uniqueness of this town lies in its natural and scenic treasure, because here you can find slopes such as Pico del Rey, Siete Lagunas, Cerro Pelao, Vacares, La Alcazaba and even Mulhacén itself. It is one of the oldest human settlements in Spain, so we make our own the words of Jean Sermet: “Guadix is a city that should not be described; it must be seen.” And it is that this locality is all monuments since it conserves a wide catalogue of patrimonial elements of historical-artistic character.

Its urban centre has three large well-differentiated areas, the first is the high district that is occupied by the so-called cave houses, the second is the medieval, Renaissance and Baroque era, which highlights the Arab Alcazaba and finally we can find the new Guadix, the result of modern urban development.

Special mention has the wide variety of active leisure activities that can be done here as it goes from fishing, canoeing, hiking or MTB.

The Charm Of The Malaga Interior: The 22 Prettiest Towns In The Province

To enjoy the most beautiful villages of the province of Granada nothing better than trusting Fuerte Hoteles. The Olée Holiday Rentals Apartments are located in a perfect enclave on the eastern Costa del Sol, between Torrox and Nerja, typical Andalucian villages with the best climate in all of Europe. This accommodation offers you tranquillity while leaving at your disposal a large number of activities and places to visit. The complex has air conditioning, a spacious living area with satellite TV and a modern kitchen equipped with an oven, dishwasher, washing machine and dryer. Some have a terrace and wonderful views of the Mediterranean Sea.