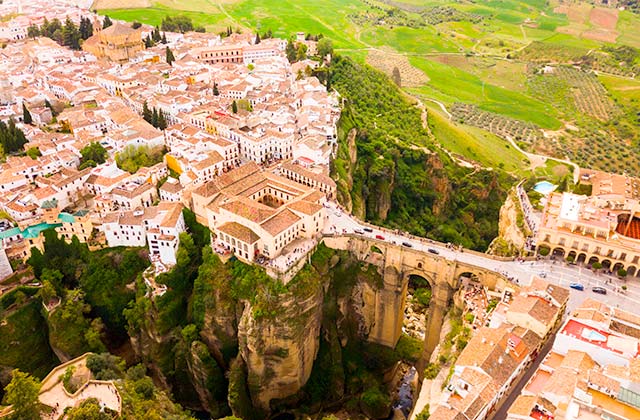 It took 42 years to build one of the most famous bridges in Spain, the bridge of Tajo de Ronda, which joined forever the new city and the old, the Moorish and baroque. The so-called New Bridge has become an emblem of the dreamy city of Ronda bandolera dance and its romantic charm. These things and more have placed the city in the ranking of cities to visit at least once in your life-magazines and national and international guides such as Lonely Planet or Condé Nast Traveler.

This is how poet and Nobel Prize for Literature, Juan Ramón Jiménez described the city:

“Where that fascination, that craving desire for a typical Andalusian city, for better people, that safety for after, that time that has stopped ?. This is it, here is Ronda Serrania de Ronda. Ronda high and deep, emphatic, deep, round and high … ”

The malagueña city has inspired poets, artists, writers, painters and travellers throughout its history thanks to a unique monumental artistic heritage and a unique enclave. Ronda has a huge variety of possibilities, for days, for weeks if we combine our visit to the environment of Serranía de Ronda and Sierra de Grazalema Natural Park. Therefore in this article, we will try to compress the essential things that you need to see and do in this city if you only have a day to visit it. We will take the spectacular Hotel Fuerte Grazalema as the starting point (just a 25 minutes’ drive from Ronda). 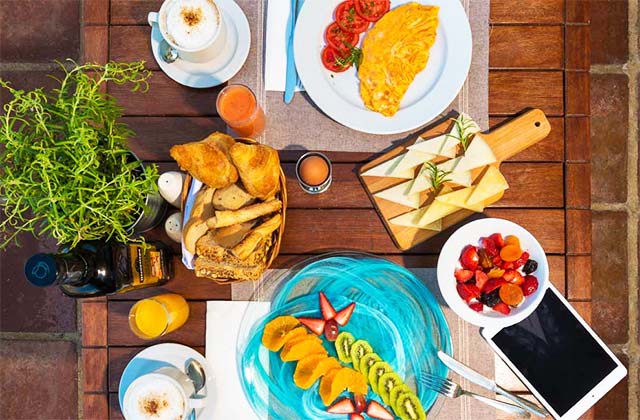 We have breakfast in the hotel’s buffet while contemplating the town of Grazalema: juice, coffee and sweets, bread, and oil with Iberian pork. We leave towards Ronda, specifically towards the New Bridge, our starting point on foot, which only takes 25 minutes to reach. We leave the car in any of the parking lots that are adjacent to this point. A good place might be the Parking del Socorro in the square with the same name. Continue walking down the Calle de los Remedios, turn right down Rosario street and there you will see this majestic monument, the Puente Nuevo (New Bridge). 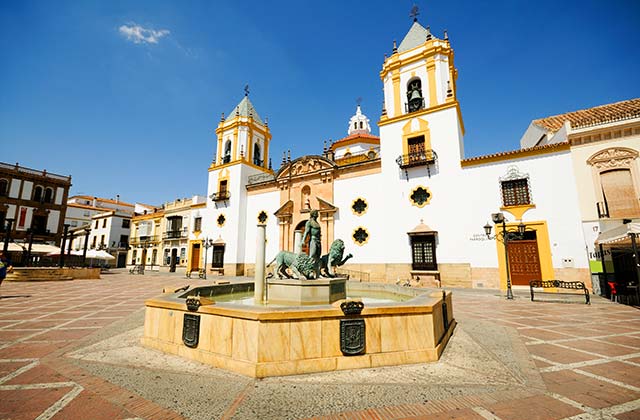 As we said, the New Bridge is a unique viewpoint over the gorge where the Guadalevín River crosses its depths, which separates the old medina quarters, or Arab city of the new district, the Mercadillo or Little Market, where we will find ourselves now. The Arab city in turn borders the neighbourhood of San Francisco, still separated by the walls protecting the medina quarters.

The New Bridge is the symbol of the city since it was built in the eighteenth century; to one side, the lookout, to the other side, the other houses perched on the rock, whitewashed, facing the precipice with respect but challenging it. The building is 98 meters high and was built with stones from the back of the throat, decorated with different balconies which host an Interpretation Centre inside. 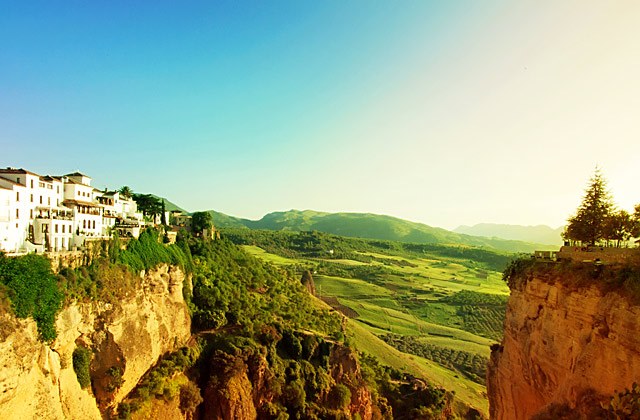 The other gem of the Dreamy City is located nearby, the Bullring of the Royal Cavalry of Ronda and Bullfighting Museum, which lead us to the green Alameda del Tajo.  This is one of the oldest and biggest arenas in the world. In fact Ronda is considered one of the cradles of modern bullfighting, which emerged in the eighteenth century. Its stone structure, double floor with arches and columns topped by a gabled roof of Moorish tiles are well worth the visit. It was here in 1954 when the world famous Goya bullfight was created, where the attire transports us to the era of the painter Goya. 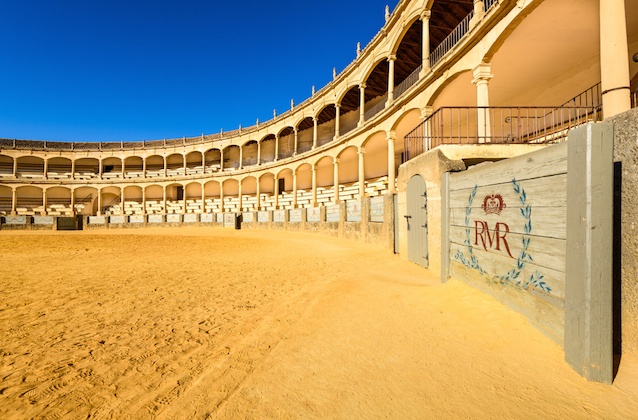 Ronda invites you to stroll quietly and appreciate every detail of the town centre, declared historical artistic site in 1966. If we continue our tour we find the Church Santa Maria La Mayor, one of the most important monuments of Ronda, where the largest mosque in the Medina used to be. The Catholic Monarchs undertook the task of building the current church with Gothic style, with Renaissance reminiscences in 1945. 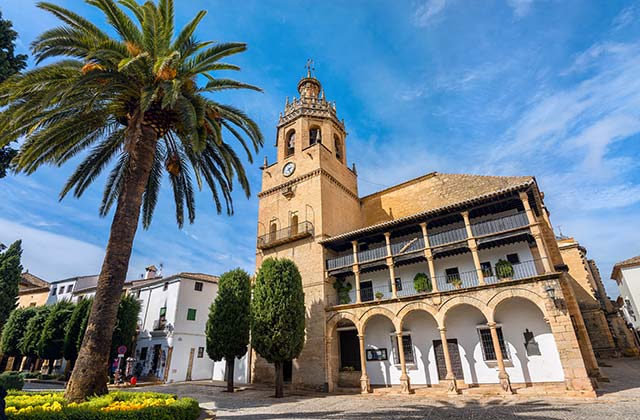 The Church Espírito Santo awaits on our way, built during the same year. Its Renaissance style resembles that of a fortress. The Main Altar with its almost rococo style is worth our time. Ronda has a virtually infinite number of monuments, but today we cannot see them all, so we leave the visit to the palaces of Mondragón and Salvatierra (XVIII century) and Casa del Rey Moro at your choice. You can access the Casa del Rey Moro at the bottom of the steep cliff from the stairs of Mina.

Of course, it is essential to visit the Plaza de la Duquesa de Parcent, a stately area of the old town, where Real Colegiata de Santa María de la Encarnación la Mayor stands out, as well as the City Hall (1743), with its wonderful double archway façade. The square is closed by the Convent of Santa Isabel de los Angeles. 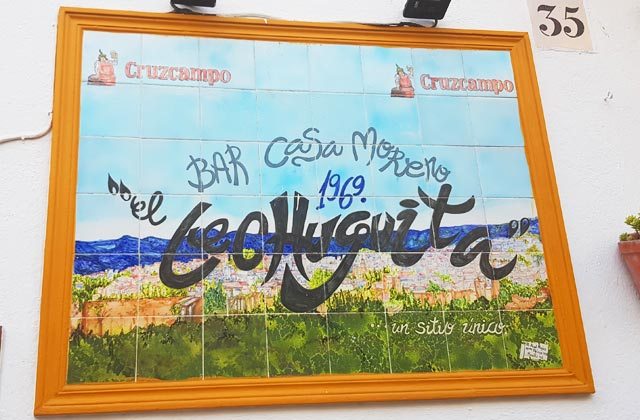 Certainly after the walk and the visit to the stairway we feel hungry, but Ronda is an excellent place to feel hungry. The city has a huge gastronomic tradition especially concerning the meat, especially the bull. Apart from the restaurants located in Calle Nueva, if there is a landmark that is the famous Lechuguita, one of the busiest and most popular places in the area where the trademark of the house is lettuce and special dressing. Other good options include the bar Quinto Tramo, De Locos Tapas or Carmen la de Ronda.

At any of them, do not forget to ask for the Ronda wines, which are becoming more important in the Spanish market due to their good quality. Try the ‘masita’ sausage or the oxtail tapas at any of the bars, you won’t regret it! And for dessert? The most typical of the municipality is the Yema del Tajo, a sweet that has been examined by the new chefs and even has an ice-cream version. Its creators, confectionery Las Campanas, produce 10,000 boxes a year. To try it as ice cream, the ice-cream shop II Sobrino offer this and many other flavours. 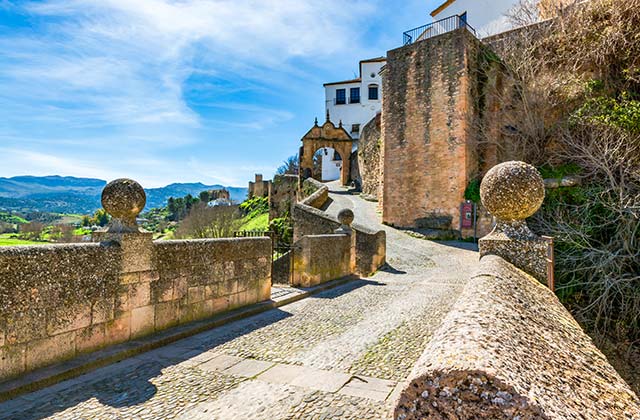 With a full stomach now we can continue with Casa del Gigante, La Casa de San Juan Bosco, the Arco de Felipe V and the Puerta del Almocábar, one of the most important spots of the Wall of Ronda (XIII century), built during Muslim occupation and the gateway to Alcazaba.

The afternoon can be reduced to four key spots next to the town centre. The first is the Arab baths, this hammam from the Muslim era is the best preserved in the Iberian peninsula (s.XIII-XIV AD). It could continue to operate thanks to its good state of preservation. 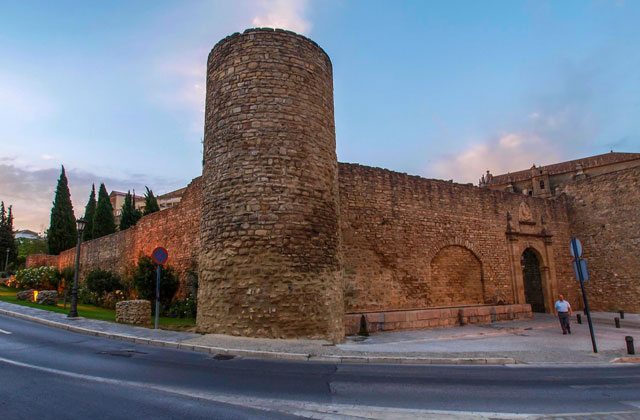 Another interesting site is the Convento de San Francisco, in the district with the same name we mentioned before. It has a distinctive local style called ‘Plateresque’. In the same street is the Fuente de los Ocho Caños (Fountain of the Eight Pipes), built by Felipe V, the oldest in Ronda which still continues supplying water to tourists and locals, drinking directly from the jet as a rondeño! 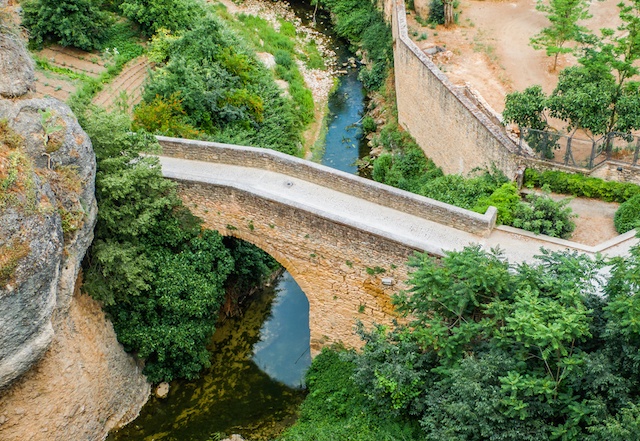 The third of the stops could be the Convento de la Merced, which preserves the Church and the garden of the building dating from 1585.. It houses a reliquary of gilded silver with precious stones containing the incorrupt hand of St. Teresa of Jesus, from the seventeenth century.

If we have been fast walking and we have not stopped a lot in each spot, we may just have time to visit the Museo del Bandolero Ronda. This place houses part of the history of the Highlands in the XIX, with special attention to banditry of the time, their customs and way of life and their cultural legacy.

Outside Ronda we will find other activities for people who wanted more. The surroundings offers hiking, cycling, car racing in the Ascari circuit, visits to the spectacular site of Acinipo (from the Roman period); and one of the most popular options, tastings and visits to some of the many wineries in the Sierra de las Nieves (such as Bodega Cortijo Los Aguilares, famous among other things for having invented the red wine chocolates).

A great way to finish the day is to watch the sunset on the Tajo de Ronda from a balcony. The bar Maruja Limon offers cocktails, tapas and … maybe a nice dinner by candlelight.

Another option to finish the day in Ronda is to stay at Hotel Fuerte Grazalema and admire the beautiful sunsets facing Sierra de Grazalema Natural Park from its pool and jacuzzi. This hotel, one of the most recommended places in the area for its quality, tradition and service, has become a place to stay in at least once in your lifetime. It also has a small farm, spacious rooms, a restaurant with a unique view and a cuisine based on local products. Pets are also allowed.