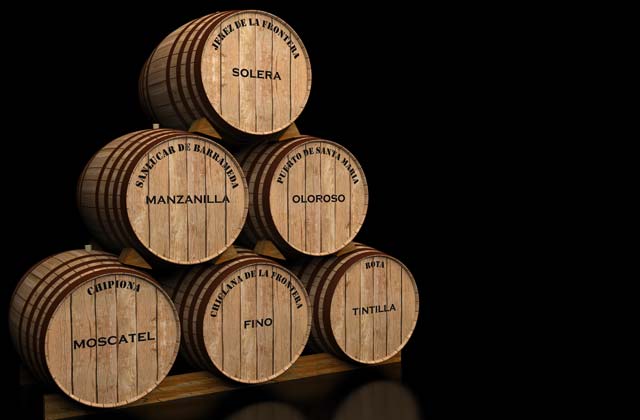 We travel Andalucia, wine to wine, through their various denominations of origin: the 12 best Andalucian wines

Posted by Fuerte Hoteles on Wednesday, June 27, 2018 · Leave a Comment

The wines from Spain have an excellent international reputation, which those made in Andalucia increasingly carry more weight, where half a million hectoliters is produced per season. 75% of these Andalucian wines are backed by one of the six Denominations of Origin that exist: Huelva County, Jerez-Xeres-Sherry, Manzanilla de Sanlucar, Malaga, Sierras de Málaga and Montilla-Moriles.

The Mediterranean climate and mild average temperatures (around 16ºC) make this land an ideal place for growing grapes and making wines of great fame. A popularity that has increased in recent years with the arrival of international awards, which Andalucian wineries have taken advantage of facing the wine tourism (Guided tours, tastings and shows).

Before an extensive supply, what are the best Andalucian wines? Malaga wine or Sherry wine? Red, white, sweet or dry? In this post we suggest 12 of the best wines of Andalucia through their Denominations of Origin. Prepare your palate and be seduced:

The Denominations of Origin Jerez-Xérès-Sherry has the oldest regulatory Council of Spain; perhaps they are the most recognized wines worldwide. Its production is spread throughout the province of Cadiz and Seville. They use the Palomino grape Pedro Ximénez and Moscatel to develop Generous Wines (Fino, Amontillado, Oloroso and Palo Cortado), Generous Liquor (Pale Cream, Medium and Cream) and Sweet Natural (Pedro Ximenez and Moscatel).

The winery Tradición is the only one of the D.O. Jerez dedicated exclusively to older wines, which are classified as V.O.S. (Very Old Sherry, over 20 years old) and V.O.R.S. (Very Old Rare Sherry, over 30 years old). A hearth that the Spanish Association of Wine Writers and Journalists have come to appreciate placing it as the 3rd most voted wines in the Best Wines and Spirits Awards Spain 2014. This Palo Cortado is an exclusive, unique generous aged for more than 32 years, combining the finesse of the Amontillado and the body of the Oloroso, perfect with blue cheeses and foies. 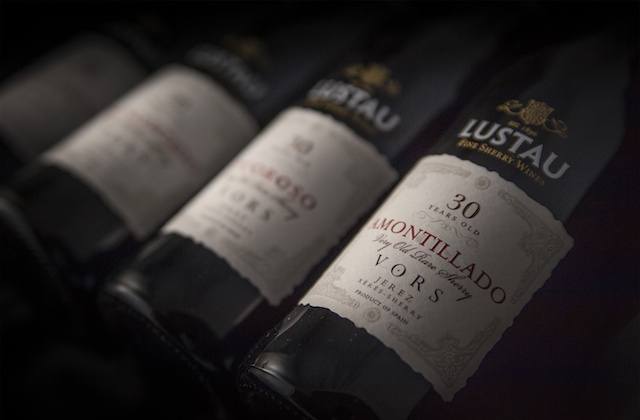 Lustau is one of the most prestigious wineries worldwide and thus was recognized by the 45th Edition of the International Wine & Spirits Competition, where it received the Sherry Producer Award 2014. A recognition that their wines share, that were awarded by the Decanter World Wine Awards 2014, where the Lustau VORS 30 YO Amontillado received the gold medal. Its dark amber color, the scent of noble woods, with pronounced saline touches and its immensely long finish make it ideal for combining with cured cheeses and game dishes.

The aging of this wine is limited to the town of Sanlucar de Barrameda, also in Cadiz, due to its special microclimatic conditions along the Atlantic. The wines with Denominations of Origin Manzanilla de Sanlucar are produced by aging in boots under a cap of yeast, a process in which culture film-forming yeasts typical of this area rises above the surface of the wine. Thus, a “cap of yeast” that transforms this chamomile is created. 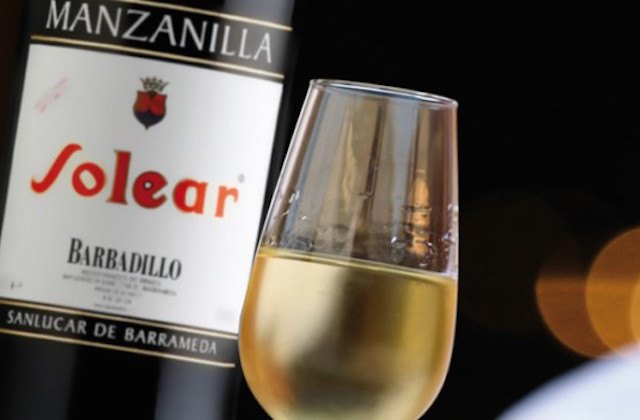 The Wine Spectator included the Manzanilla Solear, of the Barbadillo Wineries, in the Top 100 of the best wines of 2014, highlighting it as one of the most breeding chamomile of the market. According to this ranking “its years under the cap will provide incredible nuances”. It is a chamomile with character, full of elegance and finesse, pale yellow in color with beautiful reflections, very bright and intense, dry on the palate but soft and harmonious aftertaste, saline, with a very persistent taste, which combines perfectly with prawns and ham.

Another chamomile most awarded of the market is the Manzanilla San León from the Herederos de Argüeso Wineries. To its credit, it has the Gold Medal from the Brussels World Contest or the Grand Prize of the Iberwine Wine Competition. In the palate it is dry, wide, with a long and delicate taste. As good Chamomile it can be taken with ham and cheese, but the best combination will always be with native Sanlucar prawns.

The countryside south of Cordoba, the climate and the Pedro Ximénez grapes result in the wines Denominations of Origin Montilla – Moriles, which like chamomile are subjected to processes of aging under the cap. In this case it gives rise to Generous Wines (Fino, Amontillado, Oloroso, Palo Cortado), Generous Liquor (Pale Dry, Pale Cream, Cream and Medium) and Sweet Natural (Pedro Ximénez and Moscatel).

The Amontillado 1890 Viejísimo from Herederos Torres Burgos emerged as one of the four best wines from Spain in one of the most important events in the world of Spanish wine, Bacchus International Wine Competition 2015. This wine won the jury with its amber color, countersunk sharp aroma, complex sensations of good wood, with memories of a long biological aging. In the palate it is extremely attractive, large and powerful with a very persistent, sharp and elegant retronasal passage.

The wine Pedro Ximénez 1830 is considered one of the legendary jewels of Alvear Wineries, the oldest winery in Andalucia. This is one of the highest rated wines in Spain, a very old sweet wine from the hearth of Pedro Ximénez oldest winery, started in the boots dating from 1830. It is made from raisined grapes in the sun, very elegant, with a wonderful palate and a perfect eternal end to finish a meal and quietly enjoy its taste. It has 98 points in the Penin Guide 2015.

This Generous Liquor is an original wine from Sauci de Bollullos Par del Condado Wineries. This is one of the first wineries that saw in the orange an ideal complement to bring new sensations to the traditional Andalucian wines. It is aged for more than 10 years in American oak casks, to which the orange peel dried in the sun is added, which brings a distinctive mild flavor, citric smell and amber color, which counteracts with its sweetness. It provides a perfect pairing with chocolates and desserts.

This is another unique wine, elegant that will delight the most discerning palates. MIORO Gran Selección is one of the great white wines of Andalucia recognized with awards such as the Bronze Tendril or the Bronze Medal at the International Exhibition of Marbella. It has a pale yellow color with green tones and an aroma reminiscent of flowers such as orange blossom or jasmine. Dry, very structured, pleasing to the palate, perfect for grilled fish, shellfish and seafood.

Sweet wines with Denominations of Origin Malaga have a long tradition dating back centuries. They use the Moscatel and Pedro Ximénez grapes to produce liqueur wines (natural sweet wines, Masters and Tender) and naturally sweet wines.

This natural sweet wine of Muscat of Alexandria and from the Malagan Axarquia has been awarded the Gold Taste 90+ Wine Up Club in the Guide Wine Up or the Grand Mosque Gold 2010. It offers a bright pale color, clean and very alive in a glass. In the nose, it has a high olfactive intensity, with aromas of roasted pineapple, papaya, dried figs and balsamic finish. It is a complex and seductive wine, in the mouth it has great quality in its nuances and fit acidity, suggestive from start to finish. Its consumption is recommended with ice cream, sorbets, cakes, and very strong cheeses.

The Jorge Ordóñez winery does not have a long tradition in Malaga but soon has established itself as one of the most prominent. Their wine Victoria Nº2 has acquired international popularity as it is the only Spanish wine that has been present at the banquet celebrating the Nobel Prizes (2012). But this is not the only milestone, as it was also served on the 88th birthday of the Queen of England, Elizabeth II. This sweet white is bright, fresh and intense yellow, with mixed sensations of freshly peeled apple, orange peel, pollen and aromatic herbs.

But not only sweet wines are the ones that stand out in Andalucia, thus it is shown in the Denominations of Origin Sierras de Malaga. This is the only Andalucian designation that protects red and rose wines of the Romé, Cabernet Sauvignon, Merlot, Syrah and Tempranillo varieties and whites of Chardonnay, Macabeo and Sauvignon Blanc varieties.

Ronda wines are gaining more weight in the whole of Spain. This red wine aged for more than twelve months in French oak barrels has intense aromas of ripe black fruit and liqueur that combine other with cedar and spices. It has a soft and fine entry that has conquered the most demanding palates. In fact this wine from the Doña Felisa-Chinchilla Wineries was tasted by the Kings of Spain during their visit to Ciudad del Tajo in 2014, year in which it received the Gold Medal at the Concours International des Cabernets 2014 held in Paris.

The Sedella Red wines, come from the Malagan Axarquia, it is aged between 16 and 20 months in new French oak barrels. With a deep blue color, it has a high intensity and aromas reminiscent of the environment with iodine notes, saline, of the Mediterranean woods, fresh and fruity. It is very complex and elegant. The sensations in the mouth are soft, round but fresh and pleasant taste. It has qualities that have earned him the title of “red most highly valued of Andalucia” by ‘wine guru’, Robert Parker, in his magazine ‘The Wine Advocate”.

From Fuerte Hoteles you can enjoy, in addition to its services, the best of each point of Andalucia. More than 60 years of experience are the best guarantee for taking the time to discover these marine impressions. Marbella, Conil, El Rompido or Torrox are some sites where you can find these amazing accommodations, close to all these wine tourism points we recommend.