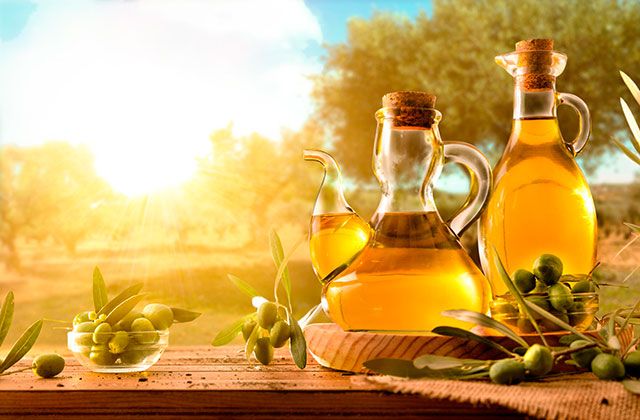 7 oil sites in Axarquia. Enjoy the oil route and the mountains

Posted by Fuerte Hoteles on Tuesday, October 27, 2020 · Leave a Comment

Oil is the main protagonist of this route, along with a singular geography, a witness of the countless changes that the feared but admired bandits brought along. The villages that make up this Oil and Mountain route are: Riogordo, Colmenar, Alfarnate, Alfarnatejo, Periana, Alcaucín and Viñuela. Mountain scenery where the green of olive trees and pastures are predominant features of this route leading into Andalusia.

This route owes its name to the large teeth and huge crocks that were found, bearing witness to the antiquity of the olive oil production in this area, the protagonist of the traditional Mediterranean cuisine. 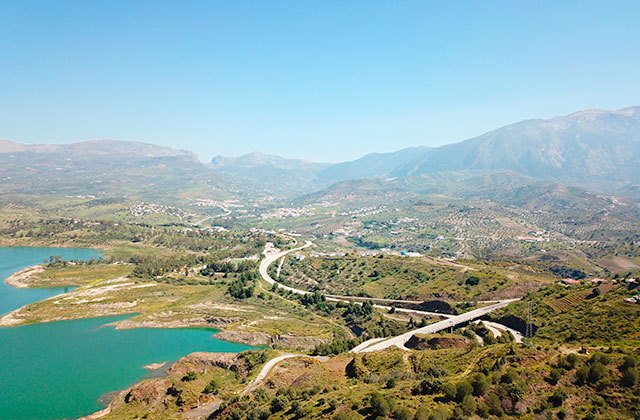 We start the route by La Viñuela, the most modern town in Axarquía. Here we will find the parish church of San Miguel, built in the sixteenth century, and next to it, the old inn that gave rise to the village and which is beautifully preserved . On the same street, a the road that followed the carriers, and in front of the church, we find the City.

A short distance away is the Viñuela dam, a recently built reservoir whose waters have been a beneficial change in agriculture for Axarquía. Dominating the dam 465 metres high, we find the neighborhood of Los Romanes, an excellent vantage point to admire a landscape of great beauty.

At the foot of Sierra Tejada, in the north of Axarquia, we find Alcaucín. Looking like whitewashed crossroads, surrounded by pine trees and hills filled with olive groves, vineyards and small orchards. And among the natural stronghold of Axarquía mountains, we see the Periana corridor and the gorge of Boquete de Zafarraya, which stretches towards Granada.

The town has an urban layout of Arab origin, with narrow, steep streets that converge in the main square where the town hall and the church are located. The church was erected in 1732 and dedicated to Nuestra Señora del Rosario. The chapel of Jesus en el Calvario, built in the mid seventeenth century, and the stone bridge with three arches over the river Zalia is in Puente Don Manuel, the culinary centre of Axarquía where you can taste baked goat with garlic. 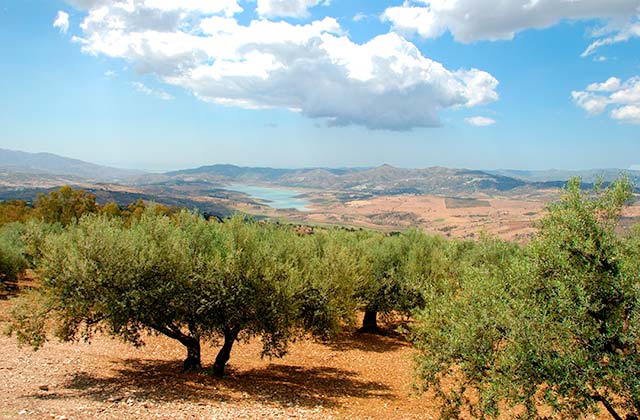 In the region of High-Axarquia, about 50 kilometres from Malaga city, we find the city of Periana, as a large viewpoint overlooking the beautiful scenery surrounding it. Its privileged location allows you to enjoy a coastal climate although it is in the interior of the province.

Periana is famous for its oil and peaches, which some consider the best in Spain. It is a town with relatively modern urban layout and buildings, since the old Periana was practically destroyed by the famous earthquake that took place on Christmas Eve 1884 . However, it has monuments such as the Church of San Isidro Labrador, of neomudejar style, and the squares of Lomilleja and de la Fuente. Another must-see visit is the Ambique tavern, where you can taste a very special spirit, produced in an old distillery using traditional methods. 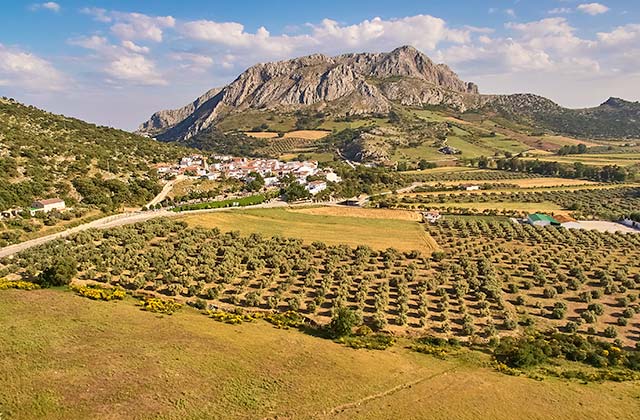 The next town is Alfarnatejo, a municipality linked to Alfarnate until the eighteenth century. We can imagine how the bandits took refuge in the rugged territory. And if we want to revive ancient times, visit the Arab ruins of Sabar Castle, on top of Alto del Fraile, near the village. In the highest part of the town centre, the most important building from an architectural point of view is the Church of Santo Cristo de Cabrilla, built in the eighteenth century. 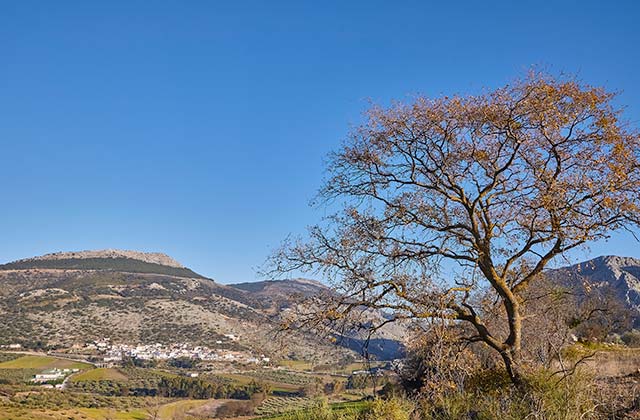 Alfarnate is loved by the visitor for the beauty of its buildings, one floor houses and whitewashed walls with balconies full of flowers, which gives the city streets an unusual majesty. Due to its location, this was the residence of bandits who attacked the caravans coming from Granada to Malaga. La Venta de Alfarnate, now a museum and restaurant, was a faithful witness of the passage of some of these famous characters like Luis Candelas and Jose Maria the Tempranillo. 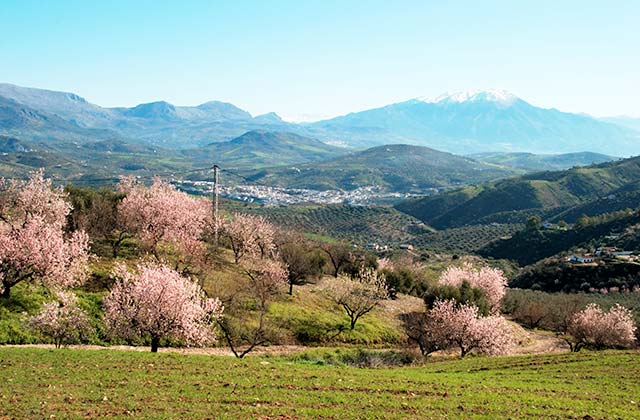 After Alfarnate the road takes us to Colmenar, a village where we enjoy walking the streets of its old town, which retains its old Moorish-style layout. As mandatory stops we have the Parish Church of the Assumption and the Chapel of Our Lady of Candelaria, the two most representative buildings of the town. We may also take the opportunity to buy local wine produced by hand and various esparto objects such as baskets, carpets or mats. 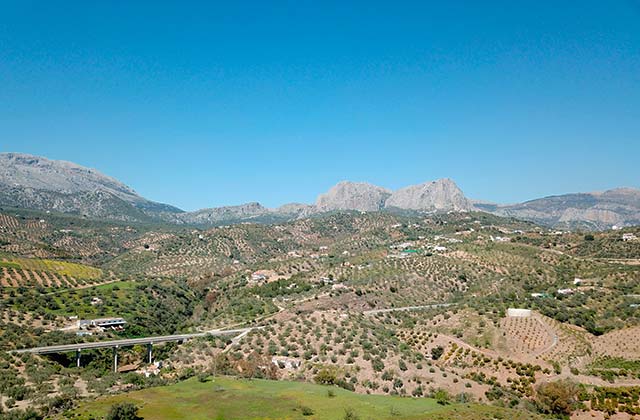 The municipality of Riogordo is especially known for the Representacion del Paso, a celebration declared of National Tourist Interest since 1996 and whose origins date back to 1951. The show takes place during Holy Friday and Saturday in a natural outdoor setting and it is the representation of some passages of Jesus public life, among which are his passion and death.

A walk through this rugged town will show us its traditional homes with niches chapels at the top, on the front door lintels, many of the houses dating from the eighteenth and nineteenth centuries. We can also visit other prominent buildings like the Chapel of Jesus Nazareno, which keeps interesting works of art inside, and the Church of Nuestra señore de Gracia, dating from the XVI century.

In order to enjoy the Axarquia in Malaga, there is nothing better than going to Fuerte Hoteles. The Flats in Olée Holiday Rentals are located in the perfect spot in eastern Costa del Sol, between Torrox and Nerja, typical Andalusian towns with the best weather in Europe. This type of accommodation offers relaxing moments and a great number of activities and places to visit. The resort has air conditioning, a large room with satellite TV and a modern kitchen equipped with oven, dishwasher, washing machine and dryer. Some features a terrace and beautiful views of the Mediterranean Sea.