Viewpoints that will leave you speechless: the best views in Andalucia

Posted by Fuerte Hoteles on Monday, November 18, 2019 · Leave a Comment

Watch the world from a good viewpoint. When you visit somewhere, one of the pictures you always keep is the panorama, the photo from a vantage point to enjoy that place, urban or natural, which won you over. Andalucia holds, in addition to beautiful cities and landscapes, a number of viewpoints that will give you a different view of the destination you want to see. Pay attention and see these ten Andalusian viewpoints as they will offer you the best souvenir you can take the lands of southern Spain.

1. The Balcony of Europe, Nerja (Malaga) 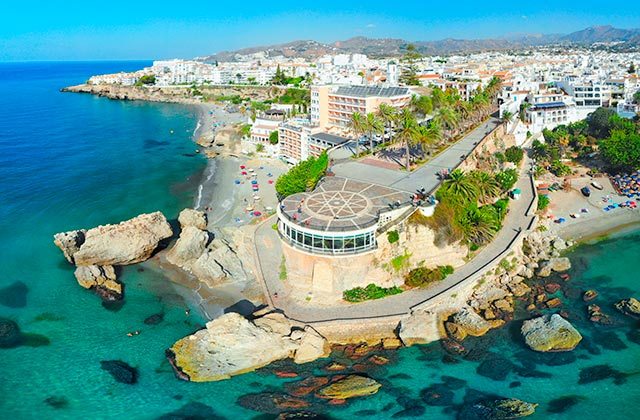 Nerja is a city in Malaga which is steeped in history, especially that of our distant ancestors. The town has a cave where men lived an estimated 42,000 years ago, so their cave paintings are some of the oldest in the world. But there is a special place that overlooks the Mediterranean Sea where the feeling of freedom washes over you. It’s called the Balcony of Europe and is named after King Alfonso XII who visited the area in 1885 after a disastrous earthquake and was captivated by that stage. He was the monarch who came to this place to check the damage caused by the earthquake and gave it the name it has today because when you were there, it seemed to be followed by Africa, hence the name “Balcony”. A spectacular viewpoint from where you can glimpse the immensity of the sea. 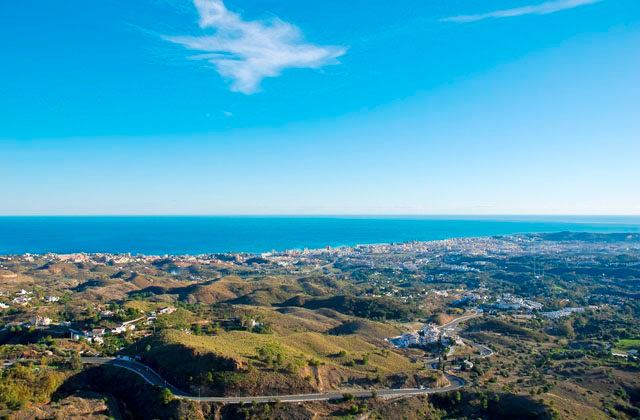 In the white picturesque town of Mijas, its neighbours know its most famous viewpoints as the Wall. This infrastructure was born dates from the Moorish era when foreign peoples that sailed the Mediterranean threatened the peace of the Arab village. The walk through this viewpoint puts the Costa del Sol at your feet and the views are priceless. Walking down this path full of gardens and gullies where waters descend as springs is an exercise in tranquillity which is priceless. 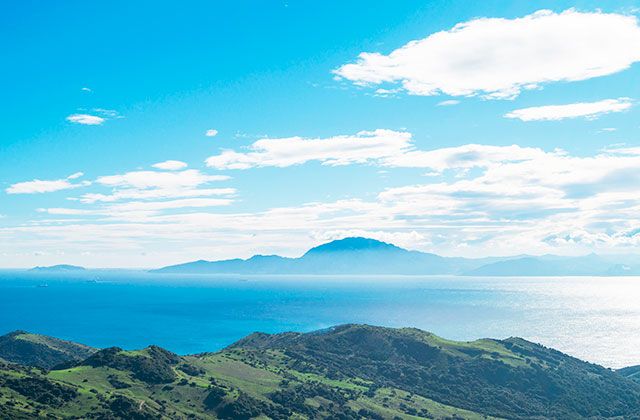 Where Europe ends and Africa begins. You can almost reach out and touch the other continent from the mirador del Estrecho in Tarifa. A unique feeling comes over you when you look over the sea and see two different worlds so close together. Do not miss this beautiful image if you visit the province of Cádiz, a memory that will stay with you forever. Only 15 miles separate the coasts and on days when the sky is perfectly clear, you can see from Ceuta to Tangier. 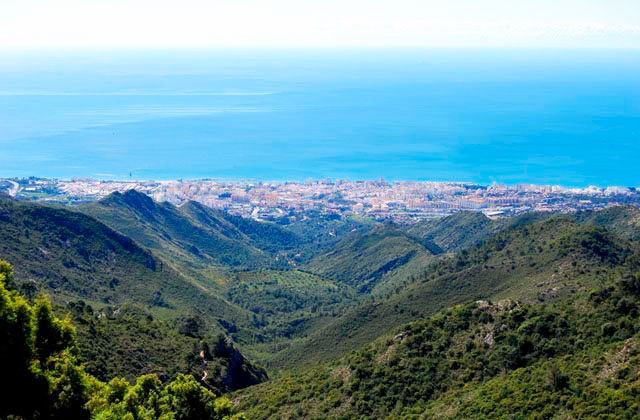 With spectacular views over the city of Marbella this viewpoint is 900 m high, putting the majestic Mediterranean Sea at our feet.  On the mountain to our left, known as the Port of Marbella, we can see a monument to the ibex which is very abundant in this area. For this reason, it is also known as the Mirador of the Ibex. From here, a winding road begins that descends to the spring of Puerto Rico. To our right, the Cruz del Juanar is located and we can access its summit by ascending the winding path from near the viewpoint. An unforgettable outdoor experience with exceptional views. 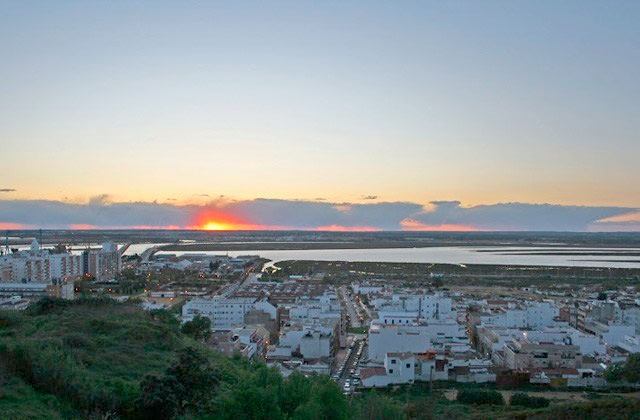 Panoramic view of the city of Huelva and the Natural Park of Marismas del Odiel is the place to get the best taste of the capital of Huelva. El Conquero is one of the most emblematic areas in Huelva, not only due to the presence of numerous hillocks that form its peculiar physiognomy, but also for the wonderful views from a walk around this place. Bring home a unique picture of this Columbian space and experience the wonders offered by this unique view. 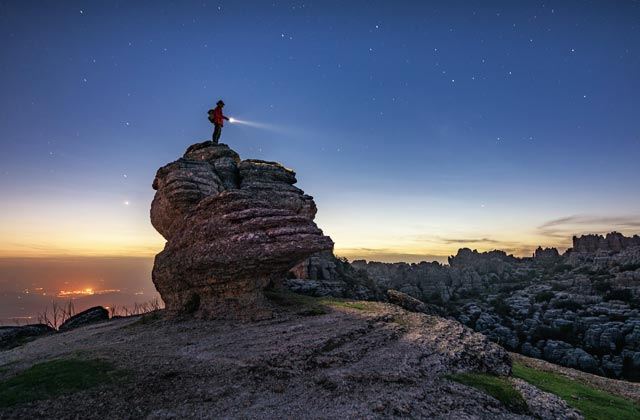 El Torcal de Antequera has two viewpoints: las Ventanillas and Diego Monea. At both of them, you can enjoy a superb karst landscape that makes up this beautiful Natural Park. Its limestone creates “mushroom” figures on the horizon and its protected vegetation makes this place one of the key spots to visit in the province of Malaga. Furthermore, during the astronomical activities organised, you can see a sky which is full of stars open before you. Feel free to get away to El Torcal and immortalise this exceptional spot. Located on the campus of the Malaga Alcazaba, surrounded by pine trees on Mount Gibralfaro, is this viewpoint that offers stunning views of the city of Malaga. From here you can make out the Malagueta bullring, the Tres Gracias (Three Graces) fountain in the Plaza del General Torrijos, the port, the city hall, the cathedral, the Alcazaba and an unrivalled view. Also in the area are some catering establishments where you can enjoy a coffee while admiring the sea and the town. If you go to the Costa del Sol, this viewpoint will leave you with a different picture of what the city is like. The Salina Dolores viewpoint is a magnificent window to the Bay of Cádiz and is a true reflection of the peculiarities of this beautiful natural park, where the sea and the wind play a leading role. The colours of the white sandy beach and the blue sea contrast with the grey of the muddy areas where typical molluscs inhabit the area, such as sea snails, clams or razor shells. It is a privileged place to spot flamingos, spoonbills and countless birds typical of intertidal areas, and also to enjoy the mosaic of shades of green, grey and orange of the flora in the area. Sunsets and sunrises are the best times to contemplate the beauty of the place. 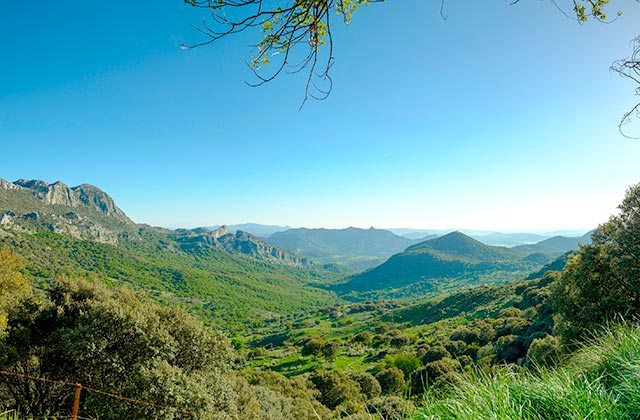 Possibly the most important viewpoint in the province of Cádiz. Located in the privileged Sierra de Grazalema, the bird’s-eye views of this natural environment will fill your lungs with clean air.  To the right is the Sierra del Pinar where the forest of pines is found, tree species extinct in most parts of the world which survives in these mountains because it is the most important rainy point of the peninsula. To the left, the sierra del Endrinal with its classic Mediterranean vegetation.

The Puente Nuevo de Ronda can be seen in one of the most famous pictures of Spain: a stone arch which appears hold Ronda, divided into two halves by the Guadalevin River, together. However, this is not necessarily why every time people see this monument, their jaws drop with admiration. The first way to appreciate the Puente Nuevo de Ronda in all its splendour is to look from the viewpoints in the Plaza de España or Ernest Hemingway Street, in the new part of town, right at the entrance of the bridge. You need to fight the vertigo you get at the Tajo de Ronda with its fall of almost a hundred metres to the bed of the Guadalevin. A unique sight that you can see if you visit one of the most beautiful cities in Malaga with its rich heritage. This watchtower is the ideal place to enjoy Cádiz’s best views. It is the highest point of the old town rising 45 meters above sea level and housing a dark chamber from which to watch, in real time, the activities of the streets of Cádiz. Its structure is part of the House-Palace of the Marquises of Recaño from the eighteenth century, and its purpose was, same as all of the city’s watchtowers, being and advantage point from which to watch over the waters, which were vital for the commercial activities of the time. The Salto del Cabrero (Goat Herder’s Jump) is a classic route of the Sierra de Grazalema. From the overlook, one can appreciate the beautiful structure of a fault formed by 80-meter high vertical walls separated by a 50-meter wide canyon. It is important to mention the magnificent panoramic views that can be seen from the cliff, as well as the numerous bird species that are typical of the area, such as the griffon vulture. There is a legend that says that a goat herder jumped across it carrying a pitcher of milk for his sick son without spilling a single drop. 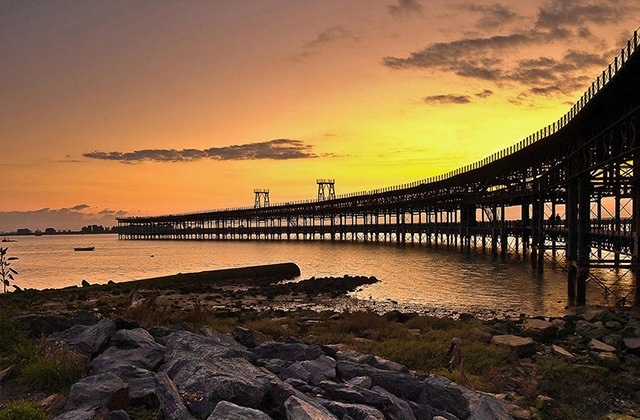 The Tinto River Pier is one of the most emblematic places of Huelva, a symbol of the history of the province. It is the favorite place of Huelva’s residents for enjoying the sunset, from a balcony overlooking the estuary. With 1,165 meters in length, it was built after the purchase of the mining developments by the English Company and served for unloading materials coming from the Rio Tinto Company Limited (RTC). In the Sierra de Aracena y Picos de Aroche Park, rises the Arias Montano’s Rock, in Alájar. It is a very emblematic place due to its landscapes and its natural environment, in addition to the Our Lady of the Angels cult, whose hermitage is located at this overlook.

Named after sixteenth-century humanist and theologian Arias Montano, who chose the place as his retirement place, it has been the location for several movies and is located in the highest portion of the province of Huelva, the port that separates Alájar from Castaño de Robledo. The rock or “peña” rises above a cave complex and offers unparalleled views of this area and the Sierra. From this overlook, you can enjoy truly amazing views. You can see the entire valley of the Guadalhorce River, the Sierra de Jobo, the Sierra de Camarolos and the Sierra de las Pedrizas, in the municipality of Antequera.

Villanueva del Trabuco sits at the feet of Sierras Gorda and Sierra de San Jorge, in the central limestone arch of the province of Malaga. On the skirts of the Sierra de San Jorge, there is the Fountain of the 101 Spouts, which is a must-visit place because it is the most famous spring. 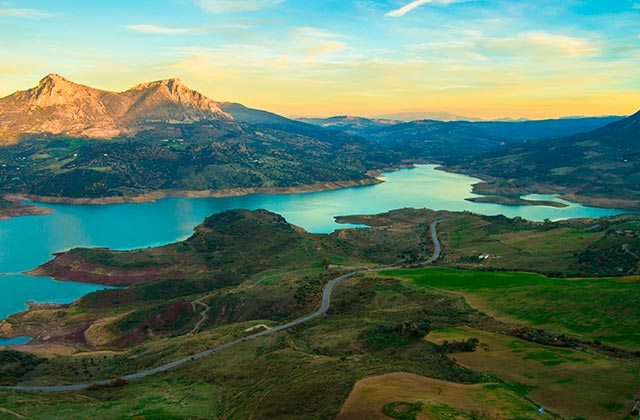 From the Zahara de la Sierra Overlook, you can enjoy the view of the Sierra de Líja. This Sierra is an enormous lime mass crowned by a large flatland. Although located outside of the limits of the Natural Park, it is nothing more than an extension of the conditions of the park.

The Friar’s Overlook is located in the Algeciras – Ronda road, a few minutes away from the town of Atajate. From this place, one can enjoy magnificent views of the Valley of the Genal River and its surroundings.

The mountain gets its name from an ancient legend. It says that during dark and stormy nights, a hooded friar carrying a torch used to intercept those who ventured there. The religious man, using a scary voice, asked for a donation on God’s name and then disappeared without saying any more words. One day, a curious passerby wanted to find out what was under the religious man’s habit. Hence, showing his courage, he removed the friar’s hood, only to find out that what was under it was a skull. From this overlook, you will enjoy the most spectacular sunsets of the coast of Huelva. It is located in the A-5052 road, halfway between El Rompido and Cartaya. There, you can witness some exceptional views of the mouth of the estuary of the Piedras River and of the famous El Rompido Spit, a sand strip that separates the Atlantic from the estuary and forms an idyllic beach, which can be reached by boat.

The surroundings include a natural landscape formed by sand dunes, brooms, savins and numerous aquatic birds.

Feel free to look from other perspectives at the cities you visit and come to these ten viewpoints that we recommend. All of them will leave you with a good taste in your mouth of the Andalusian panorama. Sierra and sea at their peak in spectacular destinations at your fingertips.

Near each of these enchanting viewpoints, you will find a hotel from the chain Fuerte Hoteles. They feature excellent service, are leaders in quality according to Tripadvisor, and are supported by over 60 years’ worth of experience, so they are the best choice for your holidays. Marbella, Conil, Grazalema, El Rompido, Estepona or Torrox are some areas where you can find great accommodation.