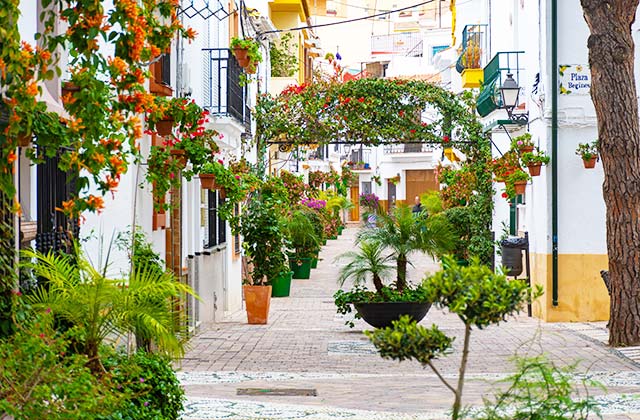 ESTEPONA MONUMENTS AND OTHER PLACES OF INTEREST

Posted by Fuerte Hoteles on Thursday, September 2, 2021 · Leave a Comment

We invite you to discover Estepona monuments and other places of interest. A tour of the most outstanding of its historical-artistic heritage. A trip through the streets and corners of this coastal city that they call the Garden of the Costa del Sol. 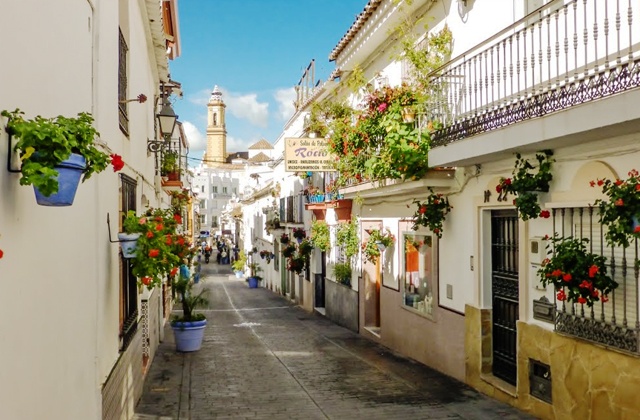 The flowers and plants are one of the characteristic elements in the decoration of the streets of its old town. Also, the content of its interesting Botanical Garden and Orchid Farm of Estepona. Building of tourist interest for the variety of plants it houses and for its architectural features.

Visit Estepona’s museums. Dive in the history, culture, traditions and customs of this town on the Costa del Sol.

Several of the museums of Estepona are in the complex of its characteristic bullring. The world’s first with asymmetrical shape.

Enter into the life and work of the main characters of its history. Know the cultural Estepona. 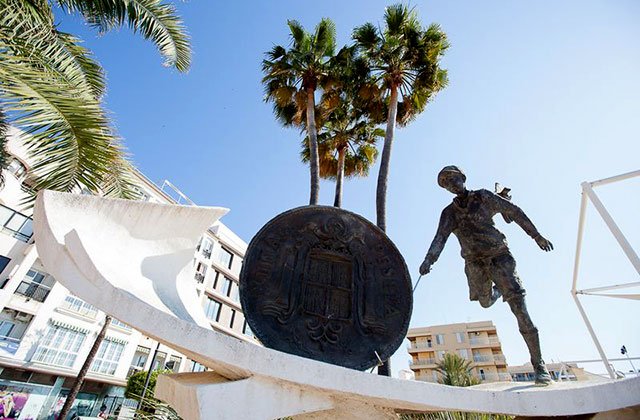 Stroll through Estepona and contemplate the numerous artistic statues spread over its plazas and streets. You will also be astonished to observe the artistic murals that decorate the walls of numerous buildings. 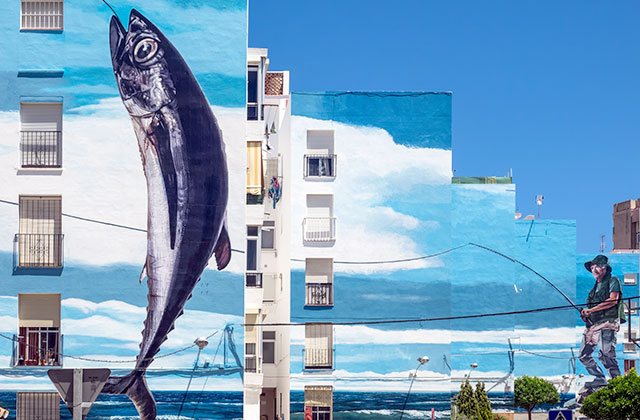 Enjoy the sun, beaches, history, culture, past and present of Estepona.

Estepona monuments and other places of tourist interest

What to see in Estepona? Civil, religious and military buildings are part of the set of outstanding monuments of Estepona. Its squares, its promenade and other corners are also places of tourist interest of this town. 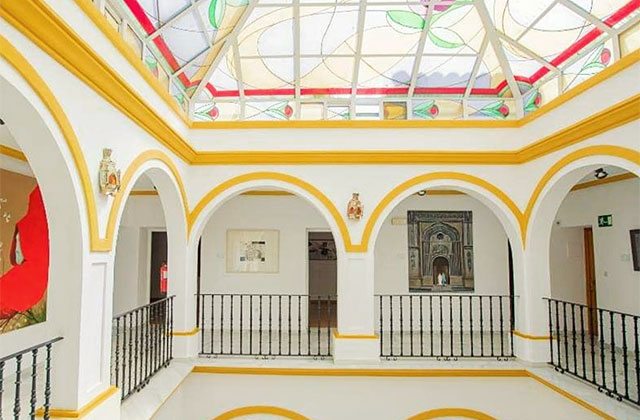 Manor house located in the emblematic Plaza de las Flores. The exact date of its construction is unknown, although everything points to the 18th century. We highlight its facade and its central patio. Its name comes from the surname of its owners, the sisters Carmen and Francisca Tejerina. 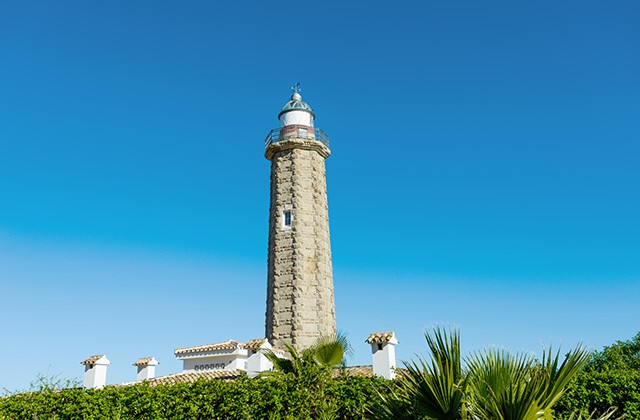 Tower of octagonal base and carved stone raised in the 20th century. It replaces the old one of the 19th century, that had a circular base and was smaller. 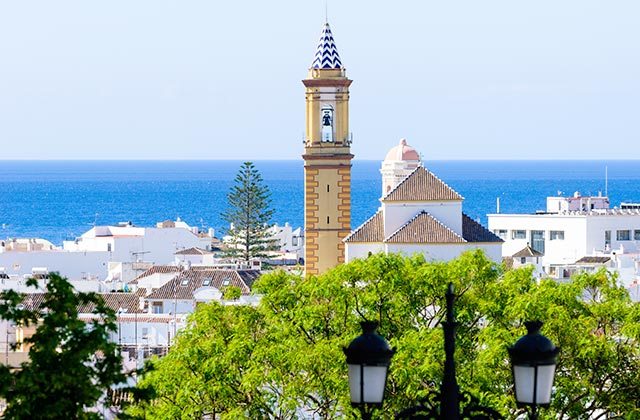 Temple of the 18th century, raised by the Franciscans on an old chapel of the Veracruz. The popular Fray Diego José de Cádiz attended its inauguration. It became the Parish Church of Los Remedios in the 19th century. We highlight its facade with marine, Franciscan and pre-Columbian iconographic elements. 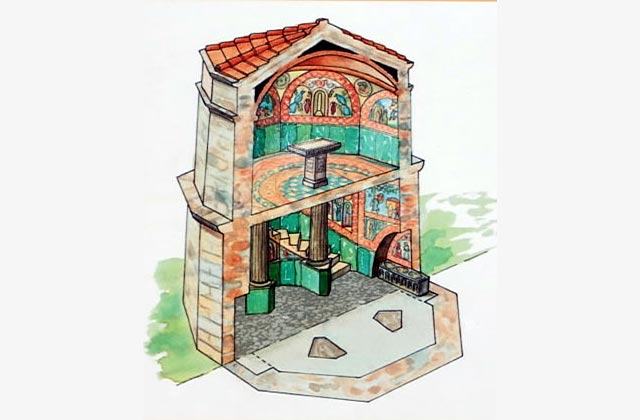 Archaeological site of the typical funerary monument that we can see throughout the Roman empire, associated with the expansion of Christianity. Some of the remains found in this site can be seen in the Archaeological Museum of Estepona. 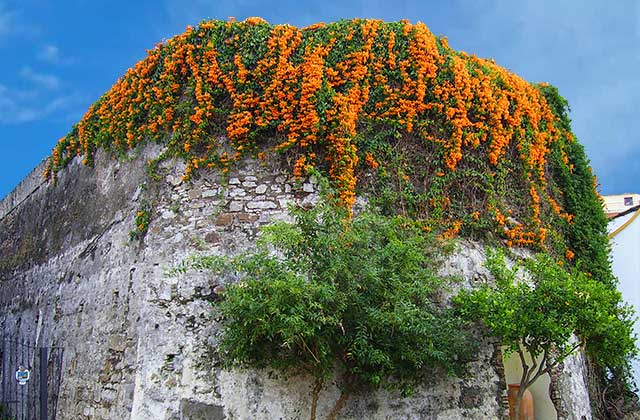 Remains of a fortress built in the 16th century, by order of the Catholic Monarchs. It was raised over the old one of Arab origin called Estebbuna. Estepona comes from this name. 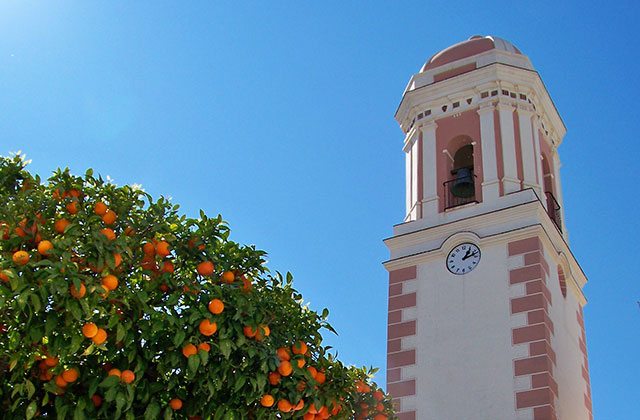 This tower dates from the 16th century. Originally it was part of the Church of Los Remedios, that was demolished after the earthquake of 1755. Back then the clock of this tower was a sundial. Now are the bells of a modern mechanical clock that set the time in the streets of the center of Estepona. 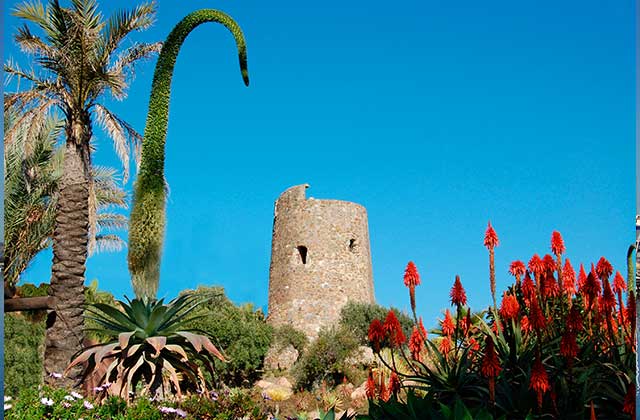 Towers of Muslim and Castilian origin raised for the defense of the Andalusian coasts. In Estepona 7 of these towers are preserved, also called watchtowers or lookout towers. One of them is the Torre de Guadalmansa. 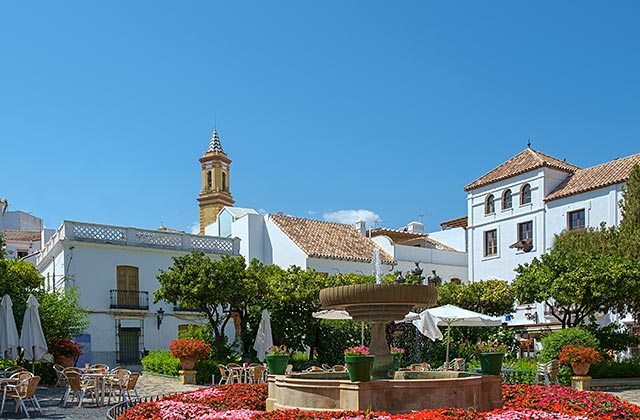 Great pedestrian square, center of Estepona’s life. It is home to some of the most outstanding houses of the 19th century, as well as a central fountain and a garden full of flowers. 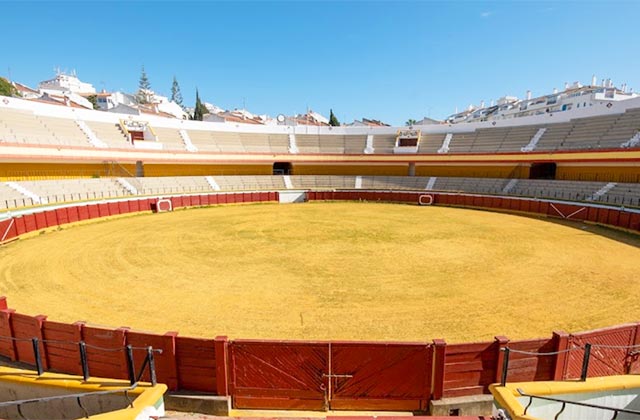 It is the world’s first asymmetrical bullring. It was inaugurated in 1972. Its architect, Juan Mora Urbano, designed it to ensure maximum shade and comfort for the spectators. Several of the museums of Estepona are located in its facilities. 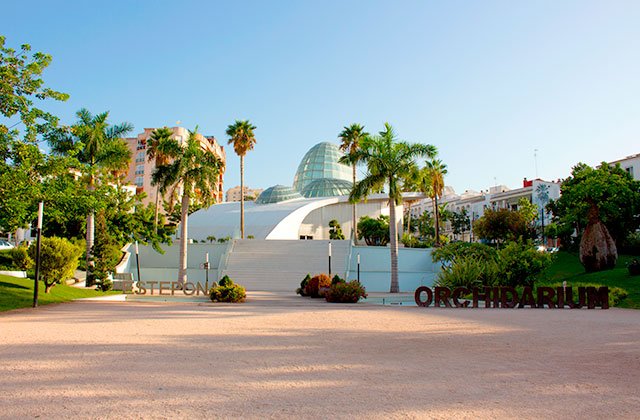 A unique building with lake, waterfalls at different levels and three large glass domes. It houses the largest European collection of orchids. More than 5,000 plants and 1,300 species from around the world. It also has a beautiful bamboo forest and other interesting botanical species. Created with the aspiration to become an international reference for lovers of plants and architecture. 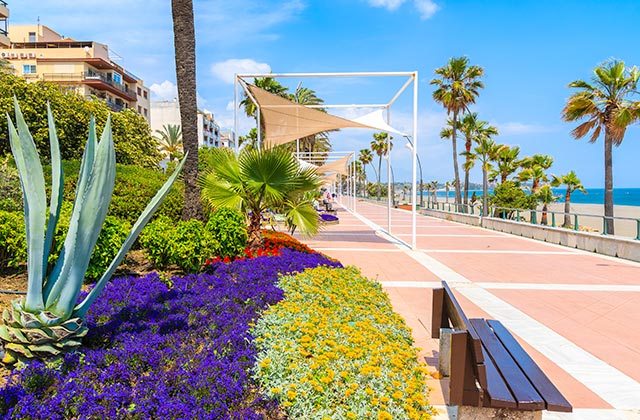 Estepona’s seafront promenade stretches for 3 kilometers. It includes the extensive Playa de la Rada and reaches the Fishing Port. It is the meeting point of locals and tourists. Ideal for long walks and spectacular sunrises.

Estepona museums allow you to know the history, culture and traditions of this town on the Costa del Sol in a simple and pleasant way. 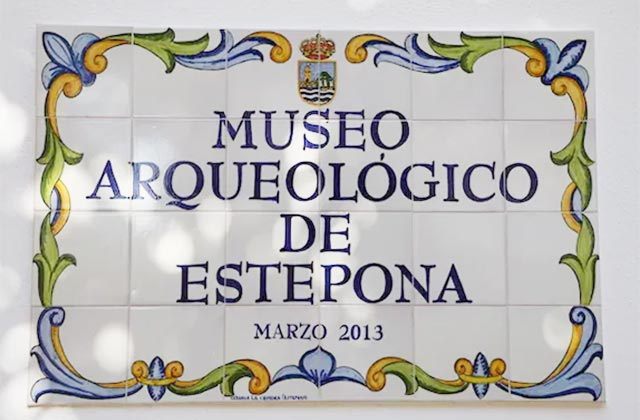 Museum with four rooms dedicated to different periods of the history of Estepona. It preserves and shows archaeological remains found in the different excavations carried out in its territory. Among the most outstanding is the Venus of Estepona. Statuette with more than 5,000 years old. Other remains belong to the Phoenician, Punic, Roman, Christian and Muslim eras. 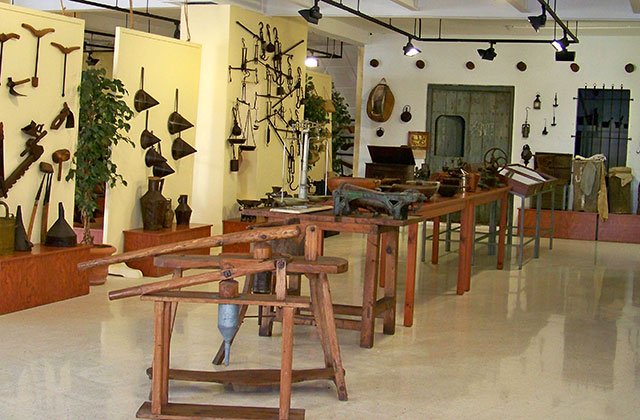 An easy and entertaining way of showing the traditional way of life, customs and trades of the inhabitants of Estepona. Through different rooms, the museum shows the utensils used by locals in their daily lives at home, in the field and at sea. Tillage tools, fishing gear, different types of boats… 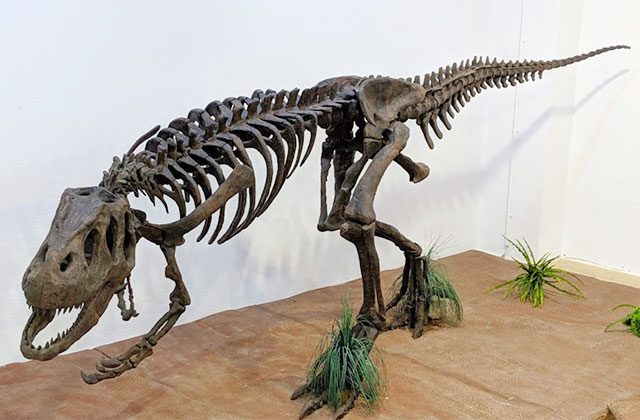 A unique museum in the province of Malaga, on Natural History. A scientific reference in Europe for preserving and showing the collection of marine mollusks from the Pliocene of the basins of Malaga, Velez and Estepona.

The exhibition has 800 species of mollusks. It displays the only siren fossil (marine cow) registered in Andalusia for the Pliocene. It also has a collection of echinoderms (sea urchins) from the Guadalquivir basin, and a paleo botany collection of more than 300 ferns, conifers and vascular plants from the Lower Permian of the Sierra Norte de Seville. 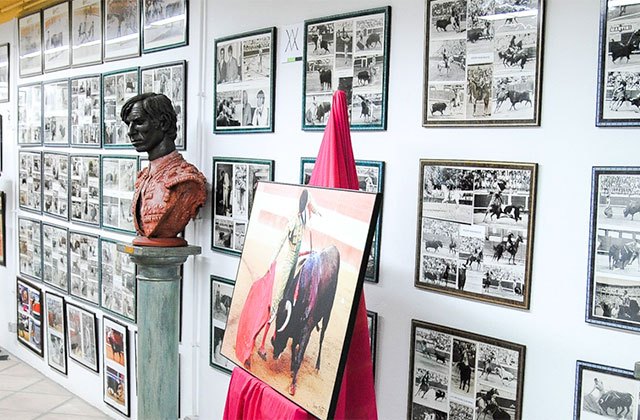 The museum is dedicated to the great bullfighter Antonio Ordóñez. It shows numerous objects related to bullfighting. Photos of important bullfighters and memorable scenes in the bullring; Bulls, irons and insignias of Spanish and Portuguese herdsmen, an interesting collection of bullfighting posters and bullfighter costumes donated by the best Spanish bullfighters. 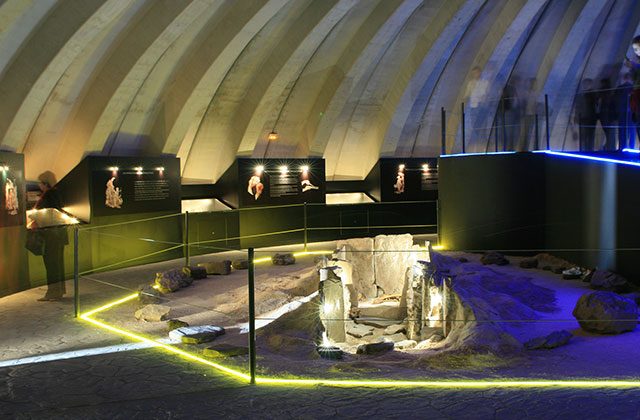 Spectacular and unique megalithic necropolis discovered on the Costa del Sol. It consists of five very well-preserved tombs and several bell-shaped graves. It is preserved in a building designed for that purpose, located in the Parque de los Pedregales. Underground buildings under a tomb, which recreates the megalithic funerary architecture, as a center of interpretation of these archaeological remains. 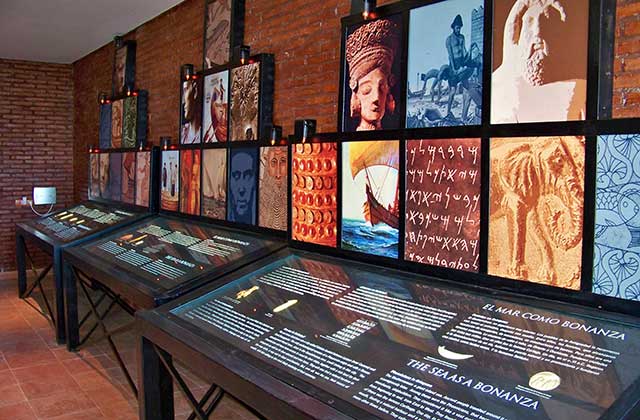 Archaeological remains of a Roman villa from the 1st century AD, found next to the tower of Guadalmansa. The interpretation center of this old villa is located inside a large green area, next to the beacon tower. The exposed remains, audiovisual projections, models and photographic panels help to understand and to know what life was like in that Roman villa.

28 things you cannot miss in Estepona

What to do in Estepona: route through the historic quarter and marina

Route of Artistic Murals: paintings to turn Estepona into a museum city 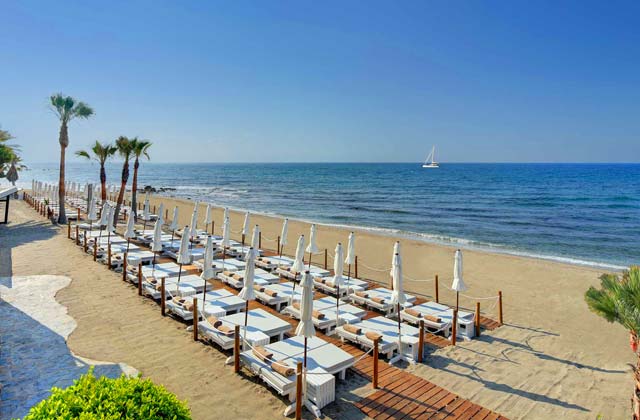 Without a doubt, the best place to stay in Marbella and Estepona is Fuerte Hoteles. This chain has over 60 years of experience as a leading chain. Holidays in couple, family or friends, either way you choose to travel seamlessly adapts these hotels where you can practice many outdoor activities in these destinations and you will find facilities for you to enjoy your favourite sports. And for little ones, the hotels have fun and entertaining animation programmes for children. Do not hesitate to stay at Fuerte Marbella (Marbella) if you travel to these two cities on the Costa del Sol.