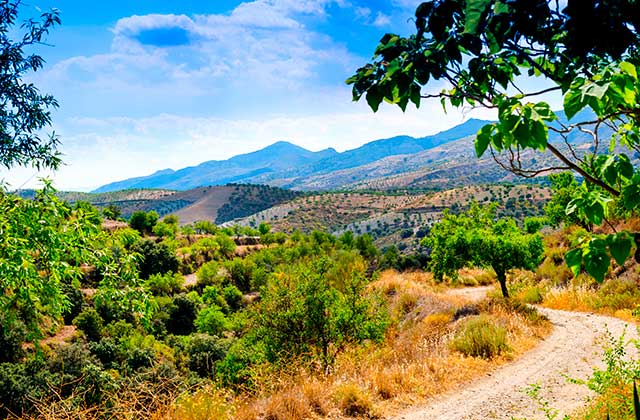 The Alpujarras is a mountainous region between the provinces of Granada and Almeria, important mainly for its series of valleys and ravines that descend from the heights of the Sierra Nevada in the north. In addition to exploring the area on your own and do hiking and climbing, La Alpujarra has a large protected area. It is worth visiting the Sierra Nevada National Park and the Natural Park within it, for its variety of flora and fauna. Some of these species are protected, such as the ibex, badgers and wild cats, and can be seen in the park. There are also historical sites such as the Historical Site of the Alpujarra that is well worth visiting for its mines and protected heritage. 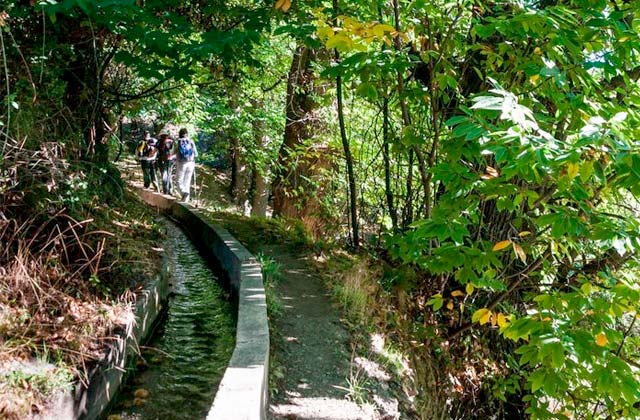 This trail is a true reflection of the lifestyle of the Moors with water always present. It starts at the top of the village in the district of the old square and through the “rim” of the “balsa del Castillo” towards “Castanias” through “the Plains”, the ravines, etc. Walking along the edge of the ditches contemplating crystal clear water ravines, we find bitter births, protagonists of countless stories about their medicinal waters.

Walking along these trails we can see leafy masses that provide us with freshness while walking, we will also find wild fruit and chestnut trees, which besides giving us the chance to try their fruits, will let us see the “cinarrerde” with its cone-shaped mud nest , the European golfinch choosing poplars and quilting nest using the flower this tree grows in spring, the wood pigeon, the warblers, sparrows, cuckoos, magpies and wagtails, along with many other species that are part of large group of birds that inhabit these mountains.

THE PATH THE OAKS

Walking on the Roman bridge along the Camino Real (Royal Path) of the Hoyas and among ancient oaks, we will arive to Mecina Bombarón and Yegen. Mecina preserves intact its old bridge from the old “Camino Real” that connected Almeria with Granada. Some attribute Roman origin to this architectural relic, considered a truly local landmark in the village. It is located below the current bridge, contrasting with it because of its uniqueness and style. It is of a high architectural value and has a great antiquity, besides being the only one in the region that still survives in time. The route crosses the landscape of the Sierra for 5 km. along which you can see many types of vegetation and animal species such as the ibex and the wild boar. 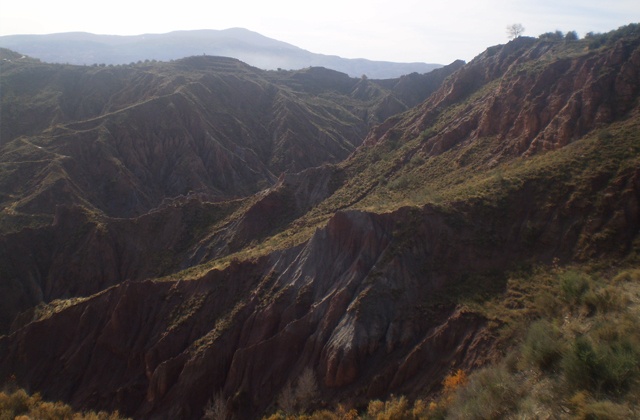 Yegen is universally known by the English Spanish scholar Gerald Brenan who lived in this town for several years, retelling in his wonderful work “South from Granada” the customs, traditions and life of its inhabitants, who have honoured the author’s name giving it to a known route which passes through the lower part of town. The tour starts at the former home of the Englishman and advances through the town until we reach the Camellona source. This source begins on one of the busiest and remembered roads by the English writer, who liked taking long walks and enjoying the great value of the local ecoculture.

Following this path, the signals that identify it descend to the so-called Peñón del Fuerte (Rock the Fort), a XI century fortress where the last Moorish of Yegen took refuge. Gerald Brenan refers to the Stone Fort in several passages of his book, with its foundation presumably dating from before the Muslim period: “the Piedra el Fuerte, an isolated rock which once held a Moorish castle that currently houses a family of wild cats. (…) It is a huge rock, flat-topped, with anextension of about five hundred square meters with vertical sides that rise to about fifteen meters above the valley.

You will be amazed at the diversity of landscapes in spite of its short distance, crossing through the wastelands to climb down under the shade of ancient chestnut trees. In the beginning of the trail we walk through a colourful path where we see different farmhouses, some ancient and more recent, but all blending into the Sierra. In the past, farmhouses served as a place of rest for the weary pastors of the Sierra that had free entry into them. Although they were not their property, it was a room with one or two bedrooms and a fireplace but with no running water or electricity. Currently the farms are authentic houses that both neighbours, foreigners and locals build only to enjoy the environment and landscape of the Sierra. Following the route we will find a large raft known as “La Señal”, where many villagers came to bathe. In Granada, the route crossing La Alpujarra from east to west, was completed a few years ago, and continues along Malaga and Cadiz, ending in Tarifa. It is expected that the GR-7 Road continues through Africa, becoming the first major intercontinental travel path.

This route starts from Greece and is known in Europe by the denomination E-4. On the way through the Alpujarras, we can divide the trail in seven days, travelling the Eastern Alpujarra, between ditches and crops, towards the Alpujarra Profunda, near the peaks of Sierra Nevada, up to the Western Alpujarra, between ravines and tahas . On the GR-7 route, we will discover the pure Alpujarra, white villages, its architecture, its Arab influence, traditional cuisine, mineral waters… 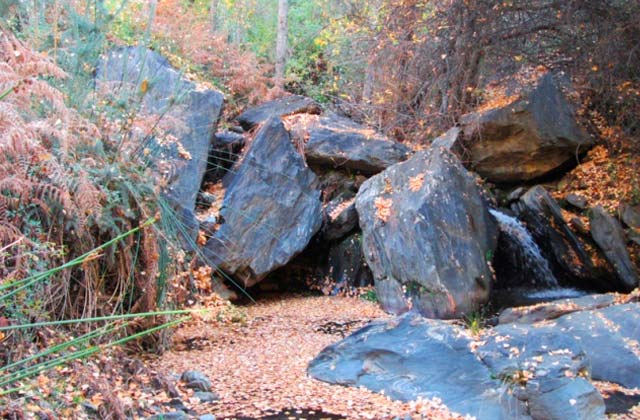 This section of the European GR-7 route passing through Las Alpujarras begins in the village of Laroles, where we find old water mills and beautiful landscapes of poplars, chestnuts, oaks and fruit trees. We will pass through the small town of Júbar where we can drink unchlorinated water from one of its natural sources. When we get to Mairena, we can admire spectacular views from the balcony next to the church. The next village, Nechite, retains its original urban structure and is a beautiful garden of orchards and gardens. We finish this first section of path of the GR-7 path when we arrive to Válor. We start the Válor section of the path following the old Camino Real that linked Almeria with Granada until we reach Yegen, known by the writer Gerald Brenan. Walking among orchards and olive groves, we will find natural sources of ferruginous waters, and will end up reaching the farmstead of Montenegro, which is surrounded by olive trees; after crossing the Mmecina river, we will have to climb 150 meters to reach Golco. Continuing along the sidewalk overflowing with vegetation and cooled by a ditch, we will end this section of the route in Mecina Bombarón, famous for its crops of beans and delicious winter apples. The third day starts at Mecina Bombarón, a series of neighbourhoods, orchards and gardens. We can see the Mediterranean Sea in some parts of the route that elapses from the foothills of the Sierra Nevada peaks. Reaching Bérchules, we can find numerous sources and fountains, as well as its sixteenth century church, built on an ancient mosque. Next to this area is Alcútar, from where we descend 300 vertical meters during 3 km. In the town of Narila we find a refurbished mill, and the final stop of the day is Cádiar, one of the most commercial towns in the area. We start the fourth part of the journey in Cádiar, where we can see the water mill or its crop of raspberries and kiwis. Walking through Lóbras, the name of its streets serving as guides, a Acequia (the Ditch), la iglesia (the church), la Era (the field), las Flores (the flowers), el Jardín (the garden)… The small village of Tímar, with only 22 inhabitants, is famous for its tradition looms. Juviles had great importance in the Arab period because of the marketing of silk. The landscape framed by mountains leads to Trevélez, where we can see the spectacular views that correspond to the highest village of the Peninsula. This fifth day begins in trevélez, located at the foot of Mulhacén, and known for its ham industry. In loma del Chorrillo we can see the source of the Chico river. In leafy Barranco de la Bina, we can see how oaks live together with pines. Then we will find the Cortijo del Viso, where there is a spectacular view of the gorge of Trevelez. After crossing several ravines, we can find reddish dark stones, almost black, indicating the remains of the María Cristina Mines. After going down a steep slope we can reach Busquístar. We start the penultimate phase in Busquístar, where we can see the ruins of an ancient Arab town before reaching the famous Pórtugos Fuente Agria. In this town there is a waterfall and a water source inside a cave. After crossing the barranco de los Castaños, we get to the village of Atalbeitar. We go into the Bermejo ravine, to cross a river full of vegetation until we reach Pitres, capital of Tahá de Ferreirola. After climbing a vertical drop of 100 meters we find Capilerilla, and continue the route through barranco de la Sangre till we get to the village of Bubión. 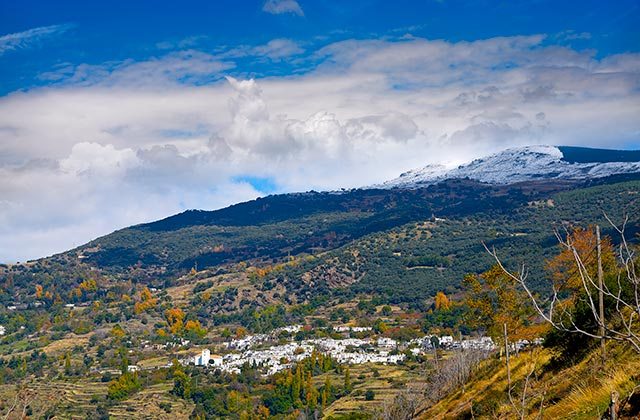 The last day we visit part of Bubión, to continue along the Cerezo ravine until we reach the village of Pampaneira. In both towns we will find various traditional crafts workshops. After crossing the river Poqueira, we reach the small town of Soportújar, whose name means “place of arcades”. Continuing the route we get to Dam 24, where a waterfall surrounded by lush vegetation invites to relaxation. In Cáñar we find the abandoned chapel, and the last stop on the route GR-7 in the area of ​​the Alpujarra is the famous seaside town of Lanjarón.

If you’re thinking about going for a gataway to these areas, check what Fuerte Hoteles has to offer. Stay at Olée Holiday Rentals Apartments, between Nerja and Torrox, and have the Alpujarras closer than ever. You can also enjoy the Granada mountains, the beach and the mild temperatures of Malaga.