Malaga Day Trip: what to see in the capital of Costa del Sol in one day

Posted by Fuerte Hoteles on Tuesday, June 9, 2015 · Leave a Comment

In a few years Malaga has become an unmissable destination in Andalucsia. Until not long ago the capital of Costa del Sol was known exclusively for its sun, beach and fried fish. Now, national and international mass media place it as the city of the museums for their great commitment to culture, accompanied by an alternative artistic movement born of local artists and independent spaces (Learn more information here).

Some experts have even dared to place it as the ‘new Barcelona’, at any rate, the birthplace of Picasso is well worth a visit. So from Fuerte Hotels we want to recommend you what to do and see in Malaga in a day, starting by car from our closest hotels.

First thing in the morning we will arrive at Malaga along Andalucia Avenue until we are received by the Alameda Principal (Main Boulevard) which leads to the old town. The latter is one of the most important avenues of the city. Its contemporary and captained image, by the monument to the Marquis de Larios, will welcome us to the city in a promenade flanked by towering fichus (it was previously populated by white poplars, hence its name) and the neo-Baroque buildings.

It may be a good place to leave your car in some of the car parks that are in the area and begin the journey on foot from the main shopping street of the city, Larios Street. If first of all, we need to gain strength with the typical local breakfast, don’t forget to visit this post on the types of coffee in Malaga or where to taste the best churros in the capital. 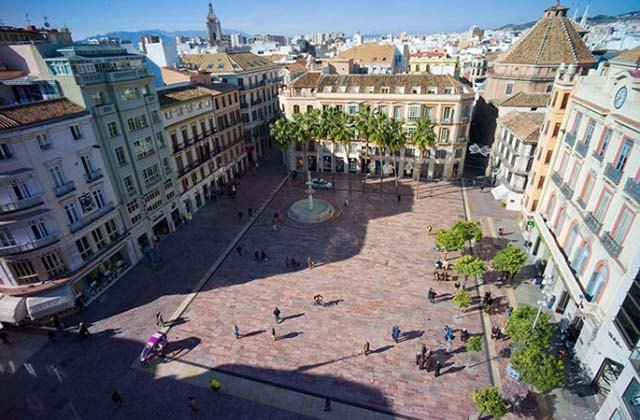 Walking down Larios Street, we will arrive at the spectacular Plaza de la Constitución, from where we can go towards the Villalón Palace (Compañía Street), head office of the Carmen Thyssen Museum, which houses the most important collection of Andalucian painting in Spain, with works by Joaquín Sorolla or Julio Romero de Torres, among others. 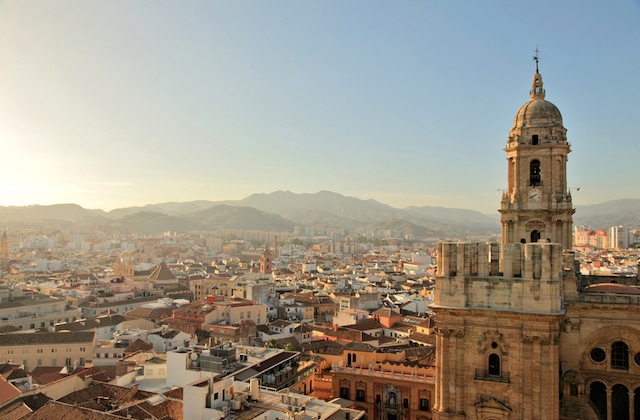 After visiting the museum, we return to the Plaza de la Constitución and we take Santa María Street towards the Malaga Cathedral, of a Renaissance style, known among the locals with the nickname “La Manquita” because its southern tower is unfinished. One of the most innovative proposals is to stroll along its roof, allowing for a half-hour tour to see the whole city from a height of 50 meters, with the sea in the background and the Citadel to one side.

The Citadel is precisely our next destination that together with the Roman Theater and the Castle of Gibralfaro is the most important archaeological ensemble of the city. This Muslim fortress, built between the XIth and XVth Centuries, that also offers a spectacular view, is well worth visiting. If we are willing to walk, we can climb up the side of a fairly steep slope to one of the most visited viewpoints of the city. When going down, we will surely have worked up an appetite.

After crossing the main door of the Citadel again, we find ourselves at the beginning of Alcazabilla Street with the Roman Theater, built in the Ist century B.C. As we mentioned, it’s lunchtime and in this street is one of the most traditional taverns of Malaga and it is a must visit for lovers of good food, El Pimpi (in this post you can find the most typical tapas and restaurants of Malaga. 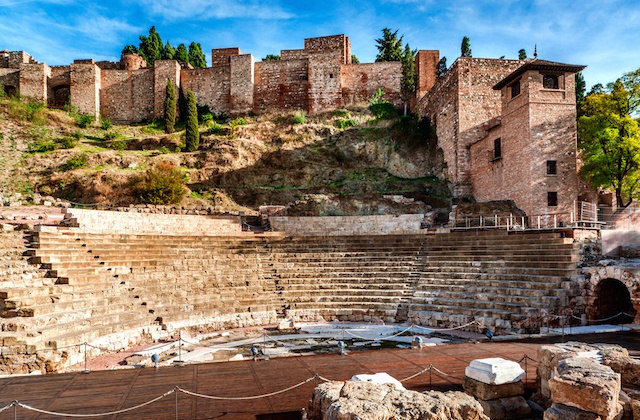 After the gastronomic stop, we continue with our cultural route which now takes us to the nearby Plaza de la Merced. There we can stop and rest the food under the shade of the beautiful jacaranda trees, in one of the many benches where no other than Picasso is sitting down. A bronze sculpture that seems to observe the square that fostered the great Malagan painter’s childhood. Just behind, right behind his back, stands the Casa Natal Museum, where the artist was born and lived, and which today exhibits a good sample of his works. 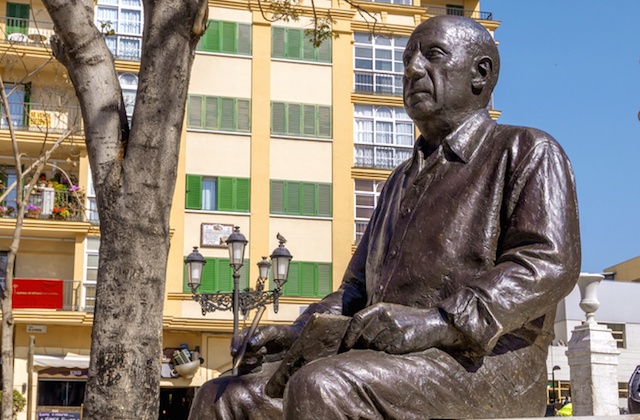 We continue along Granada Street, where at the entrance we come across the Church of Santiago, where Picasso was baptized. If we continue a little more, on the left hand side, we enter San Agustín Street, where the Picasso Museum of Malaga is in the Buenavista Palace. This XVIth Century Renaissance building features more than 200 works by the artist including paintings, sculptures, prints and ceramics. (You can get more information about the Picasso Malagan route).

Having seen the museum, we will continue down this street until we get back to Cister, we will take to the left and back to Alcazabilla. From there we will head towards the Malagueta Bullring, built in 1874, in a neomudéjar style and with the shape of a hexagon. To get there, we will cross the Paseo del Parque, of a Renaissance and Baroque nature. It is a lush Mediterranean garden that has countless subtropical species, fountains and sculptures to one side and to the other, imposing buildings such as the Rectorate of the University of Malaga or the Town Hall, up to the iconic fountain of The Three Graces. 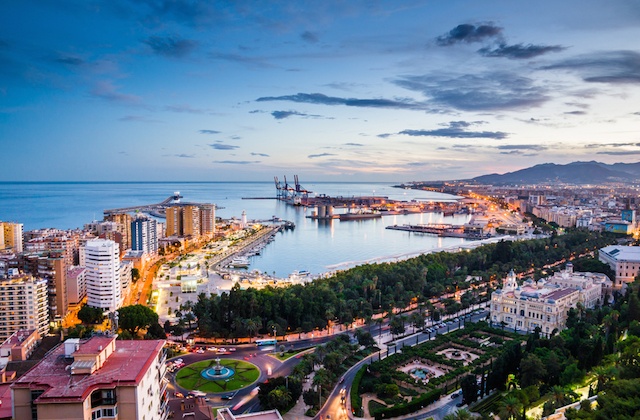 From the Bullring we will arrive walking to La Malagueta Beach, one of the best known among the people of Malaga and we will follow the seafront promenade up to La Farola, symbol par excellence of Malaga. There starts the Port of Malaga and we will cross the open shopping center Muelle Uno that has spectacular views towards the Gibralfaro Castle, the Citadel and the Cathedral. It is a good place to shop and have a coffee, soda or ice cream in one of its many restaurants by the sea. 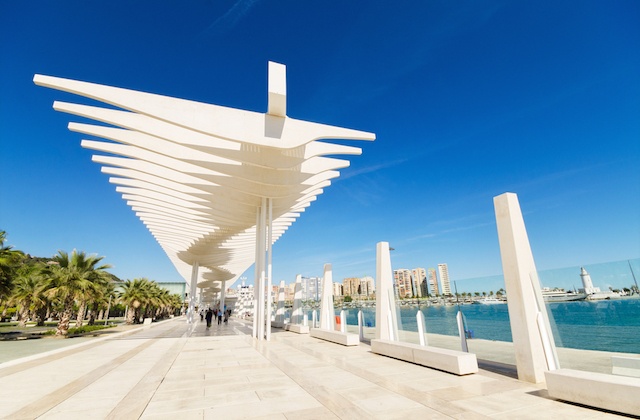 Little by little we are going back to the starting point of this route, passing through El Palmeral de las Sorpresas. This boulevard amazes visitors for its contemporary architecture and its modern gardens, located next to boats and cruise ships arrived from all parts of the world.

At the end of this tour we will be back in Plaza de la Marina, where we left the car. To put the finishing touch on such an intense day of sightseeing in Malaga, what if we have a typical wine in one of the most authentic taverns? The mythical Casa del Guardia is the perfect place to close the visit, that surely has only just whet your appetite to learn more about this city.

Anyway, it’s time to plan to come back another day to meet at least the renovated district of Soho with the Center of Contemporary Art in Malaga as a starting point. We hope to see you. 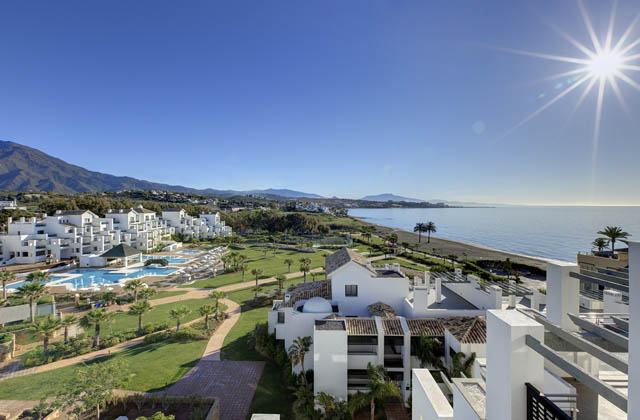 To enjoy Malaga as well as the rest of Costa del Sol, do not hesitate to stay in the best hotels, backed by international awards and with a high degree of customer satisfaction reflected in Booking or Trip Advisor. The best option is Fuerte Hoteles. The chain has beachfront establishments in Marbella, Estepona  and Torrox  for you to live your holidays as you want.